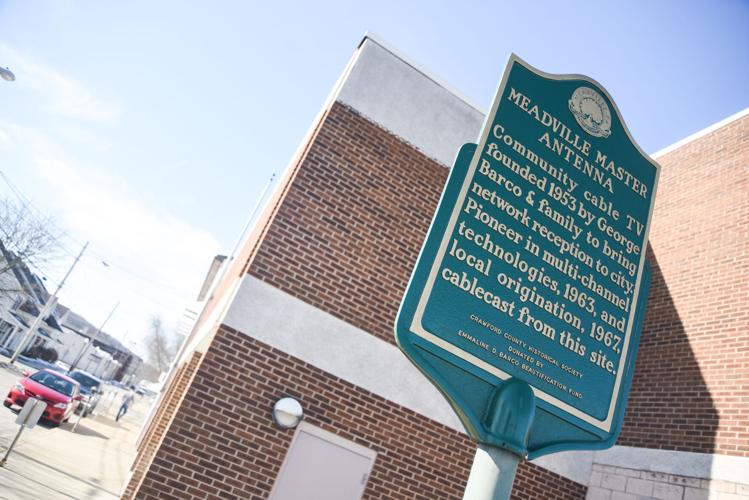 A historical is seen marking a location of Meadville Master Antenna’s office on Walnut Street in Meadville. 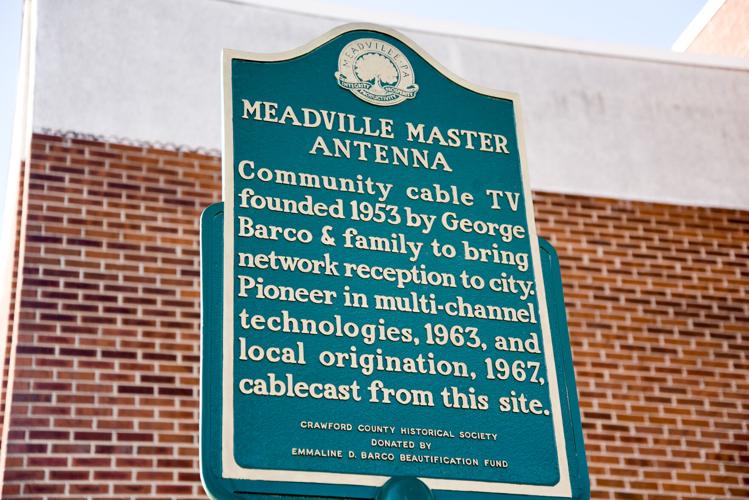 A historical is seen marking a location of Meadville Master Antenna’s office on Walnut Street in Meadville.

Turn on a television today and there are hundreds of TV channels available — from basic TV network channels to high definition versions of them to premium services — delivered via cable, satellite or internet.

Today, residents in Meadville and in communities across Crawford County may opt for more than 300 television and music channels delivered via Armstrong cable.

But, Meadville is one of the pioneering communities in the history of the cable television industry. It’s history in Meadville goes back about 70 years with local attorney George J. Barco, his daughter, Yolanda Barco; and James Duratz, his son-in-law.

Cable television got started about the same time in 1948 in three different states — Arkansas, Oregon and Pennsylvania — with community antennas placed on high points.

The community antennas were used to enhance poor over-the-air television signals. The homes were connected to the antenna towers to receive the broadcast signals.

With Meadville about 35 miles from Erie and about 90 miles from Pittsburgh, television reception in Meadville was at best weak with the distances involved to those towns which had an over-the-air station.

In her interview, Yolanda Barco said that before she was out of law school, it was not unusual for her, her father and her sister, Helene, to go to New York City on occasion.

The elder Barco would attend a continuing education class for practicing lawyers while Yolanda would attend a class she was interested in and her younger sister, Helene, would sometimes shop.

But George Barco always saved two hours at the end of each day during the New York trip to watch television in his hotel room, Yolanda Barco said in the Hall of Fame interview. But, one day, the television wasn’t located in her father’s room and on the second day, it simply wasn’t working, she said.

“He was very irritated because he wanted to see it and he had paid to see it,” Yolanda Barco said in the interview. “I was mildly interested and one day when I came back from my class and went to his room, he was in the room with four or five people and he had absolutely made a nuisance of himself and insisted on seeing whoever it was who was responsible for the television in the hotel.”

“The RCA people came to explain the master antenna system. He asked, ‘If you can do this for a hotel, can you do it for a town?’ They said, ‘We’re working on that.’ That’s how it started,” Yolanda Barco said.

Returning to Meadville, George Barco formed Meadville Master Antenna Inc. in 1952 with his daughter, Yolanda. Jerrold Electronics run by Milton Shapp was hired to build Meadville’s community antenna systems. Shapp would go on to serve as Pennsylvania’s governor between 1971 and 1979.

It offered Meadville residents three channels from the three networks — CBS, NBC and ABC when operations began in July 1953.

The system’s capacity was expanded and increased to five channels in December 1957.

But, 1963 was a year of tremendous change for Meadville Master Antenna as a rebuilding of the entire system was completed Oct. 12.

The system was rebuilt with aluminum sheath cable and was the first system to utilize aluminum cable throughout, according to James Duratz, the former general manager of MMA.

The new cable allowed the system’s signal to be sent over farther distances compared to the old flexible plastic cable, Duratz said. The aluminum sheathing also cut down on electrical interference and allowed for a clearer signal.

It allowed MMA’s system to be extended into Saegertown in 1964 and to Conneaut Lake in 1965.

The upgraded system started local original programming on CTV-13, a cable access channel, on June 4, 1967. It remains the longest continuous cable casting station in the nation.

Operations later were consolidated in new facilities at 247 Walnut St., in May 1969. The building remains in use today as Meadville’s fire station.

MMA under went another major construction project on its system in 1975 to increase its channel capacity from 12 to 21 channels. The company offered its first premium channel, Showtime, in 1978. The system expanded to 19 channels in January 1983 and then 22 in January 1987.

The Barcos and Duratz also were involved with what is today’s Pennsylvania Cable Network, or PCN a private, non-profit cable television network. It has 24-hour coverage of government and public affairs in the Commonwealth of Pennsylvania. It features live coverage of both Houses of the Pennsylvania General Assembly, as well as other forms of informational and educational programming.

In October 1986, National Cable Television Corp., a subsidiary of Armstrong Utilities Inc. of Butler, signed an agreement with the Barcos to become majority shareholders in MMA.

Under Armstrong, another major rebuilding of the system began in November 1987 with completion in April 1989.

The purchase added the northern Crawford County communities of Cambridge Springs and Venango and surrounding areas as well as Edinboro in Erie County to Armstrong’s list of communities served in northwest Pennsylvania.

Have you driven out of your way to find cheaper gas?