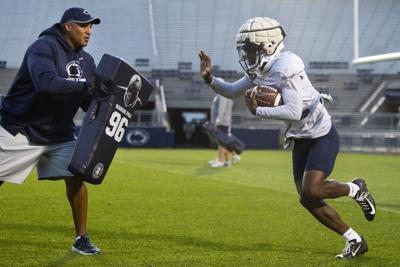 STATE COLLEGE – Penn State players began a portion of 2020 separated from their teammates as universities across the nation emptied and sent students home because of the coronavirus.

Players returned to campus during the summer and played an abbreviated, nine-game season, but the cloak of the pandemic and reminders were prevalent. As a result, simple things such as getting together off the field to bond and build camaraderie weren’t as easily available as in years past.

This year, though, Penn State players think the harmony with this year’s iteration of the Nittany Lions is the strongest it’s been during their time with the program.

“If we have one off day, we’re literally all still with each other, whether we’re going to someone’s house, chilling with each other, playing video games, looking over plays, watching film, it’s crazy,” wide receiver Jahan Dotson said on Tuesday.

After last year’s underwhelming 4-5 season in which Penn State opened the year with a program-worst 0-5 start, a trio of Nittany Lion seniors in Dotson, safety Jaquan Brisker and cornerback Tariq Castro-Fields decided they’d return in 2021 to give fans and themselves a better representation of Penn State football.

“This team is closer than any team I’ve ever been a part of,” Dotson said. “That’s kind of what separates us – the brotherhood around here. We know that every single day we’re willing to fight for each other whether it’s on the practice field or the game field. I feel like that can take us a long way.”

For offensive lineman Rasheed Walker, the bond is as strong on the field as it is when players are away from it.

“ (When) everyone’s working on drills in practice – like one-on-one reps or seven-on-seven when it’s team period – everyone’s on the sideline cheering for each other,” Walker said on Tuesday. “If I’m coming off the field and I’ll go to (offensive lineman) Olu (Fashanu) and ask him what he thought about my technique, what could I have done better… And he’s giving me the type of feedback, and stuff like that can take you a long way.”

Eighth-year Penn State coach James Franklin wouldn’t compare the cohesion with this year’s team to year’s past, saying it would be difficult for him as a coach to do so, but he did mention there certainly is a strong bond among players this year, and it’s noticeable inside and outside the football facility.

“Either way, I think we have a very close team, and that’s not just the players that’s the staff,” Franklin said. “That’s all of us in this thing together, and that usually results in good things for you.”

Making good on his observation earlier this month about the competition on Penn State’s offensive line, Franklin on Tuesday announced Anthony Whigan and Eric Wilson will rotate at left guard on Saturday at Wisconsin.

“Both have shown some really good things,” Franklin said. “Whigan has been with us for a while and has really had the right attitude and the right approach and has worked his tail off.”

Whigan, a redshirt senior, has played in 11 games since transferring from Lackawanna Junior College ahead of the 2019 season.

Wilson joined the program as a grad transfer from Harvard this summer. He saw action in 22 games with the Crimson and was named a first-teamer on Phil Steele Preseason All-Ivy League team in 2020 before the Ivy League canceled fall sports because of the coronavirus pandemic.

“I think it was an adjustment when he first got here, but he continues to get better. They will both play on Saturday.”

Walker offered lofty praise for Wilson, saying he’s seen a noticeable change in Wilson since he first arrived on campus this summer.

“He’s been doing his thing,” Walker said. “His transition from when he first came in this summer to now is unbelievable. He looks like a whole different person.”

Penn State will not release a weekly depth chart this season.

In years past, the program early in the week shared the Nittany Lions’ depth chart ahead of its upcoming contest to indicate changes to the lineup.

“For us, we’ve always released a depth chart – I really don’t have a strong opinion either way,” Franklin said. “There’s been multiple schools in the conference that haven’t been releasing them for a number of years. And then this year, we found out that Illinois, Michigan, Michigan State, Minnesota, Nebraska, Ohio State and Purdue either were not releasing it or were thinking about not releasing it, so it just makes sense for us to do it if others weren’t.”