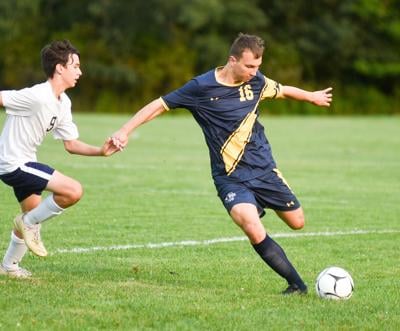 SAEGERTOWN — The Saegertown boys soccer team scored twice in the second half to defeat Conneaut (Ohio) 3-2 in a Region 3 match on Monday.

The Panthers struck first early in the game. A Conneaut player was called for a handball in the penalty box, which awarded a penalty kick to the Panthers. Senior Andy Rockwell made the kick and gave his team a 1-0 lead.

The Spartans scored two quick goals and went up 2-1. Conneaut had more time of possession and shots on goal in the half and held the lead at the midway point.

In the second half, Saegertown improved its quality of play and the score reflected that.

“We tried to make better first touches and look for players to pass too and really control the ball better,” head coach Jamie Rockwell said. “In the first half we were kicking randomly and in the second we had the ball under control more and made better passes, which led to better chances.”

Daniel Tregubov got possession of the ball at about midfield and outran a handful of Conneaut defenders before sinking a shot from the top of the penalty box. Tregubov’s shot tied the game 2-2.

The Panthers had several quality looks at the goal. One of Rockwell’s shots ricocheted off the goalpost and a Spartan defender booted it clear of the goal.

On a throw-in with 13 minutes left to play, Brennen McWright threw the ball to Rockwell outside of the box. Rockwell made a move and got passed his defender before firing another shot, which hit the post again. This time however, Rockwell was able to get to the rebound and scored his second goal of the game.

Saegertown took a 3-2 lead and held off the Spartans for the last 13 minutes to hang on for a win. Goalkeeper Drew Hunter made three saves over the last ten minutes including one in a one-on-one situation to keep Conneaut from tying the game.

“I think they played really well and they’re coming together. We only had 11 players tonight so we had no subs. For a small team they’re starting to mesh and learn each other so I was happy with how they played,” Rockwell said. “It’s early in the season so there is still a lot to work on. It was only our second game because we had a cancellation last Thursday.”

Rockwell led the team with two goals. The second of which was partly because of a halftime position switch between him and McWright.

“The only change we made and it was really my players making a change on the fly, but before the game I told them if someone gets tired or if you see something then make a change,” Rockwell said. “Brennan and Andy switched between midfield and forward at the end of the second half.  It seemed to work.”

The change directly led to McWright feeding the ball to Rockwell for his five second-half shot attempts.

The win moves Saegertown to 1-1 on the season. The team is scheduled to play again on Wednesday at Fairview.