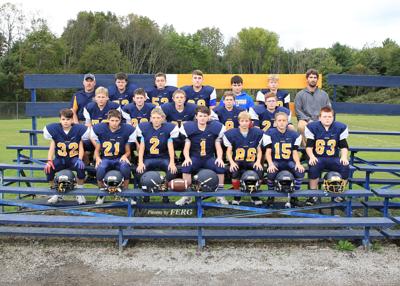 “We had an outstanding team,” head coach Nick Copeland said. “They were standouts on the offensive and defensive sides.”

Nick Craig, Luke Young, William Shaffer and Josh Colella made a lot of defensive plays for the Panthers, Copeland said. Young led the team in tackles with 38 tackles. He also added two interceptions, one fumble recovery for a touchdown and one sack.

Colella and Craig each had six sacks to pace the team. Shaffer led in tackles for loss with 10.

Offensively, six players had at least one big play that went for more than 30 yards.

“At the Junior-High level we focus on developing the foundation of not only what makes a good football player on the field, but what makes a leader in the community off of it. I’m extremely proud of the character the kids showed all season,” Copeland said. “Whether it was winning close contests against a good team like cochranton or rallying together when a teammate was in need after an accident, I cannot wait to see what these kids do as they get older and become proud members of this community.”