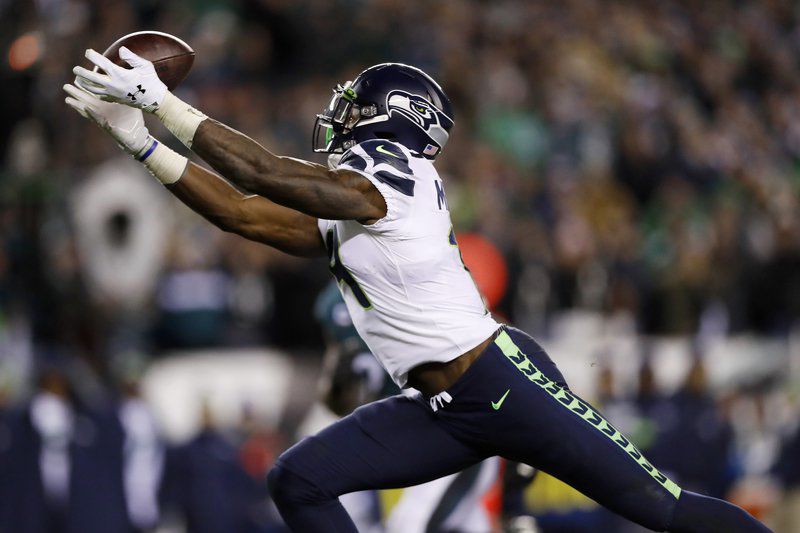 Seattle Seahawks' D.K. Metcalf catches a touchdown pass during the second half of an NFL wild-card playoff football game against the Philadelphia Eagles, Sunday, Jan. 5, 2020, in Philadelphia. 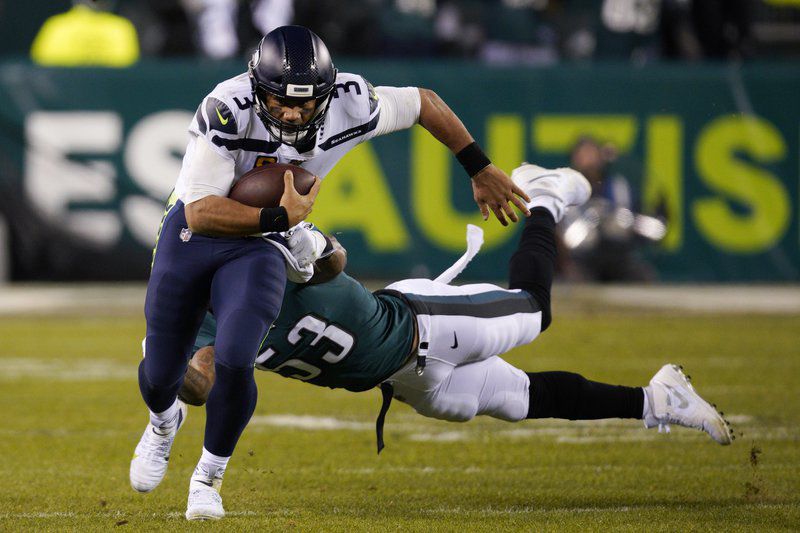 Seattle’s Russell Wilson (3) rushes past Philadelphia’s Nigel Bradham during the second half of an NFC wild-card playoff game on Sunday. Wilson threw for 325 yards and a touchdown and led the team with 45 yards rushing as Seattle beat the Eagles 17-9.

Seattle Seahawks' D.K. Metcalf catches a touchdown pass during the second half of an NFL wild-card playoff football game against the Philadelphia Eagles, Sunday, Jan. 5, 2020, in Philadelphia.

Seattle’s Russell Wilson (3) rushes past Philadelphia’s Nigel Bradham during the second half of an NFC wild-card playoff game on Sunday. Wilson threw for 325 yards and a touchdown and led the team with 45 yards rushing as Seattle beat the Eagles 17-9.

PHILADELPHIA (AP) — Jadeveon Clowney knocked out Carson Wentz. Then, Russell Wilson and the Seattle Seahawks knocked off the Philadelphia Eagles.

Wilson threw a 53-yard touchdown pass to DK Metcalf, Marshawn Lynch had a rushing score and the Seahawks beat the Eagles 17-9 in the wild-card round of the NFC playoffs on Sunday night.

“To come back here, back East, it’s a long ways, we were able to do it, pull through,” Wilson said. “We’ve been road warriors and it’s exciting. We’ve got a great defense, too.”

Nick Foles wasn’t around to rescue Philadelphia this time.

“I didn’t intend to hurt him. I hope he’s OK,” Clowney said.

Referee Shawn Smith told a pool reporter: “He was a runner and he did not give himself up. We saw incidental helmet contact, and in our judgment, we didn’t rule it a foul.”

Forty-year-old Josh McCown stepped in, becoming the oldest quarterback to make his playoff debut. But he couldn’t lead the Eagles (9-8) into the end zone.

“I didn’t get the job done,” said McCown, who was quite emotional on the field afterward.

The Seahawks (12-5) lost three of their final four games, including a 26-21 defeat at home against San Francisco in Week 17 that cost them the NFC West title.

But they traveled to Philadelphia for the second time in six weeks and became the third team to win on the road this weekend, improving to 8-1 away from home this season.

Wilson threw for 325 yards and led the team with 45 yards rushing. Metcalf had seven catches for 160 yards.

The Seahawks had a season-high seven sacks from six players.

“We made up our mind to not let them score,” All-Pro linebacker Bobby Wagner said. “It was a mental thing more than execution.”

Wilson drove Seattle 82 yards late in the second quarter and Lynch powered in from the 5 for a 10-0 lead.

Wilson connected with Metcalf for 26 yards and David Moore for 38 on third-down, catch-and-run passes to keep that drive going.

McCown finally got the offense going on the opening drive of the third quarter. He connected with Zach Ertz for 32 yards and Boston Scott ran 15 yards to the 5. But a false start, fumbled snap and sack followed. Jake Elliott’s 26-yard field goal cut the deficit to 10-6.

The Seahawks answered quickly. Metcalf stretched to catch Wilson’s deep pass, got up and tumbled into the end zone for a 17-6 lead.

Philadelphia had another chance after Shelton Gibson, just signed earlier in the week, drew a 39-yard pass interference penalty to the Seahawks 13.

On fourth-and-7 from the 10 with two minutes left, Clowney sacked McCown.

Wentz was forced to watch from the sideline following knee surgery when Foles led the Eagles to the franchise’s first Super Bowl title two years ago. He was out with a back injury last year when Foles led Philadelphia to a wild-card win in Chicago.

The Eagles were decimated by injuries throughout the season and had to rely on five offensive players off the practice squad during a four-game winning streak that sealed the NFC East title.

Wentz started all 16 games for the second time in his four seasons and played his best down the stretch with backups surrounding him. But he finished the season injured the same as the previous two.

“I’m disappointed for him,” Pederson said. “I wanted this for him. I think a lot of his teammates did, too. The team and the organization did. He’s battled through a lot.”

Seattle had plenty of injuries, too. The Seahawks lost running backs Chris Carson, Rashaad Penny and C.J. Prosise, forcing them to sign Lynch.

But Seattle has Wilson — and he has the Seahawks heading to Green Bay to face Aaron Rodgers and the Packers in the divisional round.

“We’re anticipating some snow,” Wilson said with a smile. “They obviously have Aaron, they have a lot of great players, they have a great defensive line.”