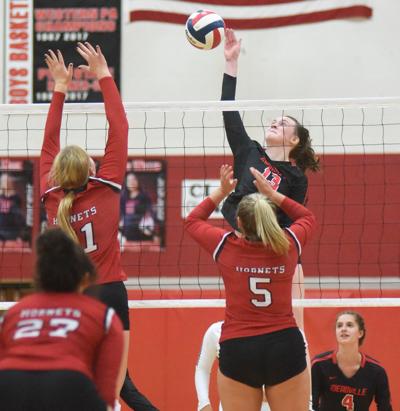 Meadville found itself down 0-2 against a good Hickory team, but the Bulldogs were able to control the last three sets and win in a marathon five-set match on senior night at The House of Thrills.

In the first set the Dogs beat themselves. Meadville committed 12 errors and Hickory capitalized on the mistakes.

“When you hand a team half the points and especially a good team it makes it tough to win,” Meadville head coach Tim Schleicher said. “Hickory competed super hard. They’re athletic and scrappy. I thought they played really good defense today and served well.”

Hickory kept up its level of play until midway through the second set. Meadville went on a mid-set run but was unable to finish the set. Despite losing, it felt like Meadville was starting to figure its offense out.

“We stuck to what we knew. We knew if we started passing the ball better our offense would come and if we started serving better we’d take them out of their offense a little bit,” Schleicher said. “I thought that was the key. We were telling them that all game.”

The Dogs jumped out to a 14-7 lead in the third set. The Hornets fought back and evened the game 17-17, but the momentum wouldn’t stick for Hickory.

Meadville closed out on a 8-4 run and advanced the match to a fourth set. That’s when the offense really started to click.

The teams traded points until Meadville scored six straight and pulled ahead 17-9. From there, the Dogs were in control for the rest of the match.

“We had some players on the bench come in to hopefully give us some momentum and I think that worked,” Schleicher said. “We also used a couple different rotations to find something that worked a bit better and we kept Emma in the middle a little more to help on their middles because their middles are long.

“It came down to ball control mainly. When our setter isn’t running around chasing passes it makes us less predictable. When we’re insistent on offense it helps.”

The Bulldogs’ was humming in the fifth set to the tune of a 15-4 score. Meadville completed the comeback.

“It’s a big region win for us tonight,” Schleicher said. “I’m pleased with how we came back and stayed focused on what would make us successful.”

“Obviously that’s big for them to win on senior night. I think it did give a little extra motivation,” Schleicher said. “I’m glad for them to have that because it’s a memorable senior night. Coming back down 0-2 is hard to do against good teams. Its’ a good experience for them especially early in the season.”

The Bulldogs are back in action on Tuesday at McDowell for a non-region match.