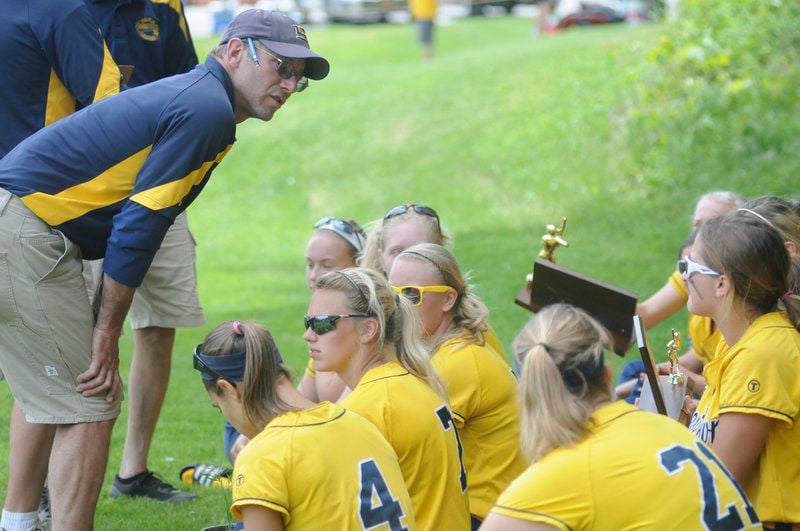 Saegertown head coach Mark McKissock talks to the softball team after it had won the District 10 title with a 5-0 win over Iroquois on May 27, 2013. 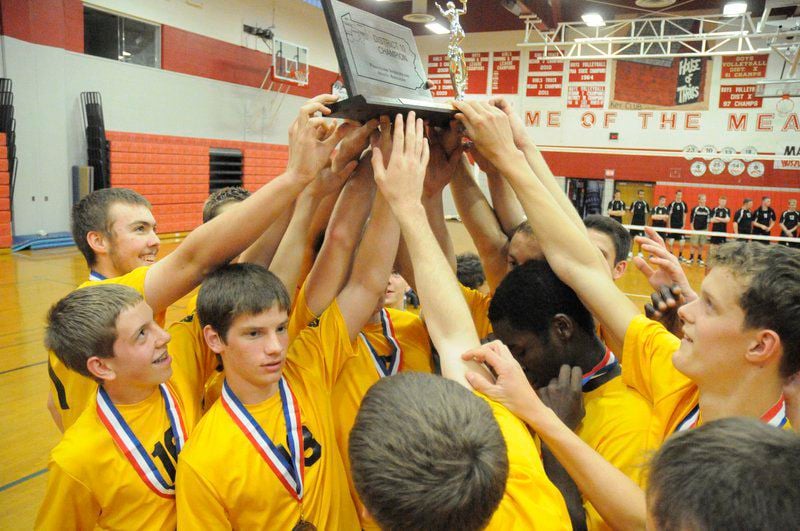 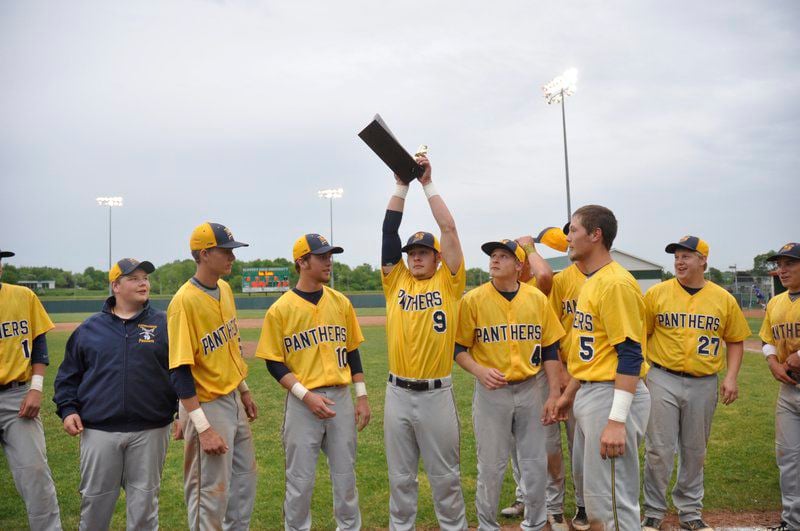 The Panthers baseball team, with members of the D-10 winning softball and volleyball teams in attendance, made it three D-10 titles by picking up a 10-3 win over Sharpsville, also on May 27, 2013.

Saegertown head coach Mark McKissock talks to the softball team after it had won the District 10 title with a 5-0 win over Iroquois on May 27, 2013.

The Panthers baseball team, with members of the D-10 winning softball and volleyball teams in attendance, made it three D-10 titles by picking up a 10-3 win over Sharpsville, also on May 27, 2013.

It was a pretty remarkable stretch of days for Saegertown Junior/Senior High School and its spring athletic teams. In 2013, in the span of just four days, the Panthers were celebrating three District 10 championships. The trifecta.

The boys volleyball started off the championship tour with its title on May 24 at Meadville Area Senior High School’s House of Thrills. Then on May 27, the Lady Panthers’ softball team snatched the Class A D-10 crown at Penn State Behrend before hitting the road to watch the baseball team complete the sweep with the District 10 Class AA title at Slippery Rock University’s Jack Critchfield Park.

“We have that picture hanging up in the school lobby with the three teams and I always look at it,” said Justin Johnson, the Saegertown boys volleyball coach. “I think about what an accomplishment that was for a small school.

“That was also a fantastic group of kids. They all supported each other so well and there was tremendous school spirit.”

It was Johnson’s team that got the party started for Saegertown. Unlike the softball and baseball teams that year, the boys volleyball team wasn’t a favorite going into the District 10 tournament.

The Panthers were 8-5 overall and 6-3 in Region 1 at the conclusion of the regular season and the No. 3 seed in the District 10 tournament behind unbeaten Meadville at No. 1 and Cochranton at No. 2.

Saegertown swept Rocky Grove and Cochranton in the quarterfinal and semifinal rounds, respectively, to earn a showdown with the Bulldogs for the title. The Panthers handed Meadville its first dual match of the season with a 25-12, 18-25, 25-20, 26-24 victory for their fourth title in seven years.

“We had a lot of seniors that year,” said Dustin Pavlik, a senior on the boys volleyball title team. “So it was a great way for us to go out. Some young guys stepped in and played important roles, which gave them experience and confidence after we were gone to carry on the winning tradition.”

The volleyball team won its title on Friday. On Monday, the softball team added the school’s second title.

The Lady Panthers got seven scoreless innings from ace Arianna Hanley in a 5-0 win over Iroquois for the D-10 title -- the Panthers’ second straight.

Hanley allowed three hits, walked one and struck out two. She also led the Panthers at the dish, going 2-for-3 with two runs and two RBIs. Lexi Palmer and McKenna Morian also had two hits each. Rachel DiBartolomeo, an All-American at Mercyhurst University, tripled.

“The 2013 team was a group of softball hungry kids,” coach Mark McKissock said. “It was John (Kutz) and my third year and everyone knew what the program was about. They were coming off of the heels of a 2012 District 10 championship and were hungry for another.

“That was the first year for a Florida spring training trip. They had new uniforms, and they were ready to make a name for themselves. This team was well above average defensively and couldn’t wait to get on the bases and run. They were hitters that also embraced the short game.”

After the Lady Panthers made it two-for-two, the pressure was on for the baseball team later that day.

“After hearing volleyball and softball won District 10 championships, the pressure was on us,” said Tyler Walters, the Panthers’ junior catcher at the time. “As we started the game against Sharpsville, I remember seeing the stands fill up with volleyball and softball players sporting their D-10 medals. Talk about feeling the pressure now. We ended up closing out the Spring Sport Trifecta and did something everyone knew was possible with that group of athletes.”

Starting pitcher Matt Thompson pitched five shutout innings, allowing just five hits with one walk and three strikeouts to lead the Panthers to a 10-3 win over Sharpsville and their third straight District 10 title.

Walters, who went on to have an outstanding career at Slippery Rock University, got the offense going with a three-run home run in the first inning to give Saegertown a 3-0 lead. He finished the game 3-for-4 with five RBIs and two runs scored.

“We went into that year knowing we were one of the better teams in the state,” Walters said. “We had experience, depth and guys that wanted to do anything it took to win a state championship. I was a junior, but I knew that this was our year to get it done with the high number of seniors we would be losing that following year. That entire group of Saegertown athletes that year were amazing athletes.”

The volleyball team went on to beat Our Lady of the Sacred Heart in the first round of the state tournament before falling to Ambridge in a sweep in the quarterfinals. The Panthers, coached by Mark McKissock, finished the season at 12-6.

The baseball team, coached by Tim Crum, ended its season in the opening round of the state tournament with a 6-5 loss to Quaker Valley, while the softball team dropped a 13-9 decision to Carmichaels in the first round.

“I truly believe our group (Class of 2013) was one of the most athletically talented Saegertown has ever seen,” Pavlik said. “We had a lot of great athletes and did some amazing things. The spring was one of the most memorable and most fun times of my life.”

It was a memorable one for the entire community as well.

“The entire town and community followed our journeys as we all competed throughout the spring,” Walters said. “It’s something special to pull a community together and support one another into the state playoffs. If I could go back, I wouldn’t hesitate to do it again.”

“That group of athletes was one of the best Saegertown High School will ever see in my opinion. Multiple athletes went on to college to compete in their respective sport and most had very successful careers. It was definitely something special and a time in my life I will never forget.”

“At the time it was obviously very exciting and very special to us all,” DiBartolomeo said. “No school in history that I know of has done that and what makes it even more cool is that Saegertown is a small town and one of the smallest schools around. My graduating class had maybe 100 people in it, so it was very admirable that we were able to accomplish something that large with such a small population of people.

“It was also remarkable since all the athletes that were a part of the three District 10 titles that year were also participating in fall sports and winter sports. I, myself personally juggled between volleyball in the fall, basketball in the winter, and softball in the spring. From a young age we were all playing backyard baseball, and basketball in the parking lot of the (French Creek Valley Christian School). We could not get enough of sports and it paid off when we won three District 10 titles in one spring.

“Now looking back at those days, it makes me think how fortunate I was and how being a part of a winning atmosphere set me up for success. We had coaches that were tough on us, we had teachers pushing us to our full potential, and without that I do not know if I would be where I am today.”