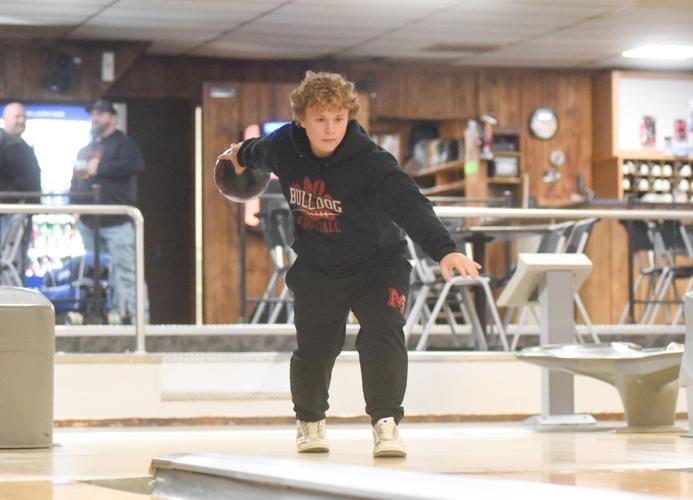 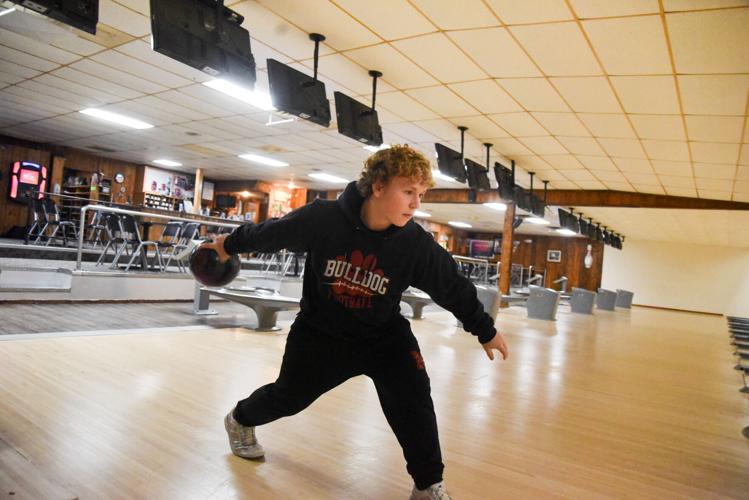 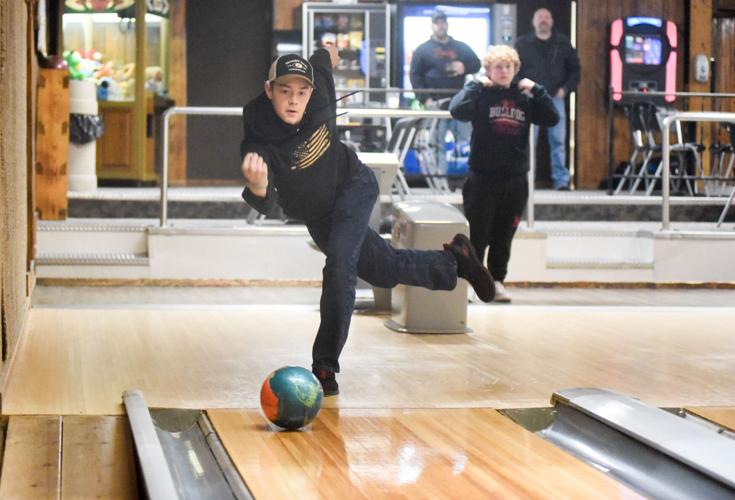 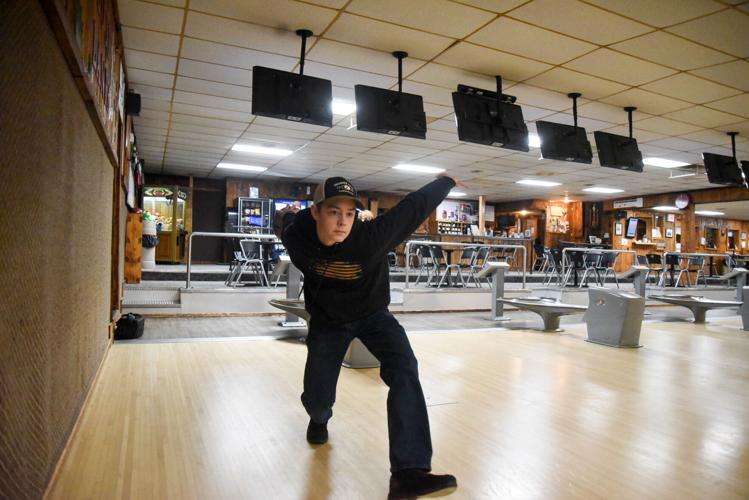 For the second time in a year the Jannazzo-and-Hickernell connection resulted in a 300 game by the former, bowled last week in Mixed Nuts League at Plaza Lanes.

“I ran into the old man (as Jannazzo calls Hickernell, jokingly) last Monday and he asked me if I’m struggling because I haven’t been in the paper,” said Jannazzo. “I told him I’ve shot multiple 700s and have definitely been in the paper. I am going to have to start running into him more often! He’s definitely my good luck charm because I believe I got interviewed last year, brought him up, and shot 300 the next time I bowled.”

As for his eighth career 300 game, Jannazzo was feeling it from the outset — with his recently purchased Storm Fate bowling ball.

“This ball hits very hard and strikes a lot. I was stringing them in my first game but two balls went long and sailed past the headpin. I still salvaged a 243. I made a little move to the left and that was all it took.

“I threw the front 9 in my 300 with ease. The first ball in the 10th was pretty good, too. I always tell myself it’s not real until I strike on the 11th ball. I’ve always had trouble with the 11th ball and it was no different on Friday. I pulled it in a little but got some very good pin action and tripped the 6-pin. I buried the 12th ball for 300.”

As for a possible 800 series, “I knew I had the strikes in me for an 800 but threw a bad shot in the second frame and got a split. I knew I needed them all the rest of the way but threw two spares during the middle of the game and ended up with 247 and 790. I knew I was locked in game one because I was throwing a lot of strikes. I just had to stay focused on the next shot. I told all my friends if my shot doesn’t change I’m going to have a big night.”

It was just a matter of carrying for Lee Duck a couple weeks ago.

Finally getting the cooperation from the 10-pin, Cochranton Lanes proprietor Lee Duck fired his 18th career 300 game in the third game in Tuesday Mixed League and finished with a 724 series.

In our brief discussion this columnist asked the 47-year-old Duck when he threw his first career 300 game and he mentioned a legendary name.

“I was 16 and I have a picture somewhere. I remember my nerves and it was in a men's league at Franklin Diamond Bowl and John Hricsina was on my team. He told me going into the 10th frame to take my time and that I got this. It’s 30 years later and I still remember those exact words from the man.”

Sidenote on Hricsina: Yours truly and teammates Jim Lynn and Joe Paden bowled with his son, Bill, in the USBC 55th Annual Pennsylvania State Seniors Tournament at Baden and Beaver Falls two weeks ago and had a blast with the big fella. He led us in team event with a 699 series. We shared many gut-busting stories about his one-of-a-kind bowling legend father.

What if Dan Francis started bowling at Lakeside Lanes several years ago?

Wrecking the lumber again in Wednesday Nighters League, Francis — who just started bowling regularly at the Conneaut Lake house two years ago — fired games of 275, 278 and 225 for an outstanding 778 series.

Oh, by the way, Francis also did his normal damage at Lost Lanes throwing an even 700 in the Spa League.

Men’s action at the other houses:

Cochranton Lanes — Ryan Williams copied Francis’ performance in the Spa League with another 700 on the spot in Pioneer League.

Lost Lanes — Allen Simpson was Mr. Consistent in Tuesday Mixed League – in a big way! He tossed games of 247, 247 and 245 for a 739. Great set, Allen! … Explosive righties Jeff Keener and Ricky Kanline fired 715 and 705 totals, respectively, in Spa League and Tuesday Mixed League. Speaking of Keener and Kanline, they also crushed the pins in tournaments recently, throwing 900 no-tap series in Auto Racers for Kids Charity Tournament at Eastway Lanes in Erie and Seneca No-Tap Tournament, respectively.

Plaza Lanes — 731 was the number in Monday Night Invitational League as Tyler Barnes and Brandon Wachob each tossed those series’ digits.

Britney Holben can bowl with the best of them — men or women. Period.

In Monday Night Invitational League at Plaza Lanes the right-handed Holben rolled games of 194, 236 and 203 for a 633 series. Great set, Britney!

In other MNI action, Kayla Card — the Lin Van Lanes dominator for many years — tossed a 609.

There is a newcomer on the Plaza Lanes block: Ellie Schommer. She shot games of 203, 201 and 213 for a 617 in Mixed Nuts League. PL co-owner Ramon Rodriguez on Schommer: “She is one to watch.”

It looks like the Stewart boys (Colby and Chase), last week’s youth headliners, have some competition — from a girl.

As soon as the talented 15-year-old Dailey rolled his ball the rack unintentionally fell, preventing the ball — which looked a like a good shot according to Harry Hanks — from hitting the pins.

“I couldn’t believe it, my heart dropped to my stomach,” said Harry Hanks.

Hanks knew what to do next.

After retrieving the ball from the lane and fixing the rack, Hanks walked back to Dailey and had a nice father/son-like brief talk.

“I just told him that I’m sorry and to take his time before throwing his next shot. I told him to breathe and he did.”

What happened next? The focused Dailey regained his composure and threw a strike to achieve his childhood 300-game dream and in the process tossed his first career 700 series with a 702.

“Throwing my first 300 is very exciting,” said the humbled Dailey, who carries a 191 average and had a previous high game of 279.

As for the lane malfunction, Dailey said, “It was unfortunate and not much fun. The ball looked good when I released it. I was upset but Mr. Hanks calmed me down.”

Hanks knows talent when he sees it and Dailey has it, according to him.

“He is very good and will only get better. He throws down-and-in and kind of hard. He also bowls for the school and is the last bowler to leave a lot, trying to get better. He is a good kid.”

Maybe someday Landon Plyler will show some excitement after throwing a 300 game.

Showing his amazing cool-headed demeanor for a 14-year-old kid, Plyler buried three shots in the 10th frame for his second career 300 game — both in the last year — and calmly walked back after each strike two weeks ago in Venango-Crawford Bowling League action at Lost Lanes.

“He was his usual no emotion Landon,” said Lost Lanes proprietor Natalie Hanks. “You would never know he had a 300 game by looking at him. He was as cool as a cucumber. He threw all solid shots and it was exciting to see.”

“In true Landon style he was humble and speechless. He only told me what ball he was using and didn’t say anything else.”

Plyler made sure his mother was paying attention, though.

“Landon came over after the seventh frame to make sure I knew what was happening. I said, just stay calm and throw the ball. That is the best I have to offer for tips — and I keep his water refilled.”

Thanks for the chuckle, Erica. She did her job.

Landon’s father and bowling coach, Chris, missed the perfect-game heroics as he was in Indiana on a hunting trip.

“I was doing everything I could not to jinx Landon as Chris was asking for updates but I couldn’t send him anything until it was over,” said Erica. “Chris was hunting with his stepbrother, Josh VanSise, and his wife, Jess, was keeping Josh updated and Josh was keeping Chris updated.

“When I finally did text Chris, he said, ‘it must have been the coaching tips I text him this morning,’ and he sent me a screenshot of the text message, ‘keep your upper body upright and elbow in the back of the ball. Last time out you kept chicken winging the ball.’ He went on to say he was ‘super proud’ and ‘it’s so awesome.’”

Plyler loves another sport, too: Football. He is a freshman on Meadville’s District 10 championship team.

“Landon hasn’t been able to attend any of the high school bowling practices yet this season because of football and has bowled out for his Saturday league at Plaza. He is looking forward to being able to devote his time to bowling but is enjoying his time playing football as well. He does truly love both sports.”

More time on the lanes may mean: More 300’s for the Plyler phenom.