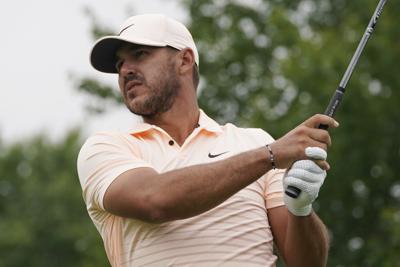 Brooks Koepka has made it abundantly clear he doesn’t like Bryson DeChambeau. That should have no bearing in golf because they don’t have to spend time together, which they don’t do, and they haven’t played together on the PGA Tour since the second round at Bay Hill two years ago.

Maybe it will be different when they are U.S. teammates in the Ryder Cup in September.

“You realize it’s only a week, right?” Koepka said Tuesday from the British Open. “I mean, look, I can put it aside for business. If we’re going to be on the same team, I can deal with anybody in the world for a week. I’m not playing with him. I’m pretty sure we’re not going to be paired together, put it that way.”

That constituted the latest “development” in a feud that began nearly two years ago and took a bizarre, public turn with a leaked Golf Channel video in May that was never aired, and the pot shots just keep coming.

“He can say whatever he wants,” DeChambeau said, sounding weary of the questions.

The only revelation Tuesday was Koepka giving a little more detail on the origin of the beef.

Koepka’s caddie, Ricky Elliott, was on the putting green at Liberty National in August 2019 when DeChambeau walked by and saw him chatting with two reporters, one of whom had been asking him questions the previous day about being criticized for slow play.

(While Koepka is unreservedly vocal about pace of play, the topic of this particular conversation was often how Koepka actually heeds his caddie’s advice).

DeChambeau made a beeline for the group. He told Elliott to pass along to Koepka that if there were any issues, Koepka should talk to DeChambeau. Koepka arrived a short time later and did just that.

And then DeChambeau, playing a video game that was streaming live, poked fun at Koepka for not having any abs in a photo shoot for ESPN’s “Body Issue” magazine.

Fair or not, it’s definitely a game. Meanwhile, the British Open begins Thursday, the final major championship of the year. The Ryder Cup is Sept. 24-26 at Whistling Straights. No, they probably won’t be partners, although DeChambeau said he would not be opposed.

“I think would be kind of funny actually,” DeChambeau said. “I think we’d do well, to be honest. It would create a little interesting vibe for the team or for the guys we’re playing against.”

Richard Lee Riley, 65, of Saegertown passed away at his residence on September 17, 2021. Richard was born in Meadville on December 28, 1955, the son of Richard James Riley and Martha Louise Sherman Riley. On July 24, 1982, he married Eva Marie Riley and she preceded him in death on October 2…

Ruth M. Bailey, 93, of Cochranton, died September 18, 2021, at Marquette Hospice House. Friends will be received Tuesday at DICKSON FAMILY FUNERAL HOME, Cochranton, from 4-6pm. A Celebration of Life begins at 6pm at the funeral home.