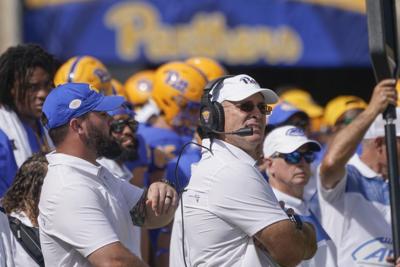 PITTSBURGH — After a week off, the Pitt football team will resume play on Saturday when the Panthers travel to Blacksburg to face Virginia Tech at 3:30 p.m.

Virginia Tech is reeling after a three-point loss to No. 14 Notre Dame. The Hokies led by eight points with under four minutes remaining before allowing Jack Coan and the Fighting Irish to march down the field for a touchdown followed by a two-point conversion to tie the game. After forcing a Virginia Tech three-and-out, the Irish were able to drive into field goal range. Jonathan Doerer made a 48-yard field goal with 17 seconds remaining to prevail 32-29.

The loss to the Irish added insult to injury, as Hokies starting quarterback Braxton Burmeister left the game due to a right shoulder injury. Backup Connor Blumrick came in the game and was able to move the Hokies down the field before suffering an injury of his own. Blumrick is now out indefinitely with a leg injury, but Burmeister is expected to start against the Panthers on Saturday.

“Burmeister will be ready to go. Came back in the game, looked like he hurt his funny bone. Didn’t look like it affected him much. So he’ll be back. We expect to see him,” Pitt coach Pat Narduzzi said when he met with the media on Monday.

The Panthers didn’t have too many injuries themselves before the bye week, but the time off gave them time to recharge mentally.

“We weren’t too banged up going into the open week,” Narduzzi said. “Gave us a week to get fresh more than healthy, just mentally. The kids had Friday, Saturday off. They could just kind of chill. Some of them went home and got to relax a little bit. It’s a mental break as much as a physical break and getting healthy.”

The series between the Hokies and Panthers has seen the home team win each of the past four matchups. When Pitt last played in Blacksburg in 2019, the Panthers were shutout 28-0 in the rain in Bud Foster’s last home game as defensive coordinator after spending 33 years as a coach for the Hokies.

This year’s contest will feature a matchup of strength on strength as Pitt’s top-ranked offense will face off against a tough Virginia Tech defense. Pitt’s offense is the best in country, averaging 52.4 yards per game, while the Hokies’ defense is allowing just 18.6 points per game.

The Pitt offense may have an early advantage on Saturday as the Hokies will be without middle linebacker Dax Hollifield for the first half of the Pitt game. Hollifield was ejected for targeting in the fourth quarter of the Notre Dame game, meaning he’ll miss the opening half against the Panthers.

“I still don’t see much respect for a 4-1 football team, which is fine,” Narduzzi said. “It’s something I’ll use.

“All the preseason ratings and all that baloney doesn’t make any difference. It’s what you do week in, week out. No one cares what you did the last couple weeks. Everybody cares what you’re going to do Saturday at 3:30. I think that is the focus.

“Our guys have to take it one game at a time, not worry about the noise on the outside, what you guys are talking about, what the national media is talking about,” Narduzzi added. “It doesn’t matter because you’re only as good as your last opportunity on the field.”

Pickett has received much of the national attention as the fifth-year senior has been mentioned as a possible Heisman Trophy contender after getting off to a hot start this year. In Pitt’s last game before the off week, Pickett threw four touchdowns against Georgia Tech in Atlanta. He’s thrown 19 touchdowns to just one interception this season and had surpassed his career high in touchdown passes (13) in the first four games of the season.

Despite the added attention, Narduzzi says Pickett is as even-keeled as ever.

“You don’t see any change in who he is. That’s good. I think you handle it week by week and see how it affects him,” Narduzzi said. “I don’t expect to see any difference in how Kenny Pickett plays.”