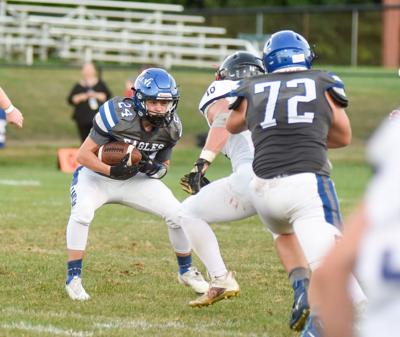 LINESVILLE  — With 40 seconds left in the first quarter, Antwan Brown put the nail in the coffin for the John F. Kennedy Catholic football team when he scored on a direct snap.

His touchdown pushed the score to 30 against Conneaut Area High School’s 0. It was Brown’s second of three touchdowns on the day.

“This is a heck of a football team that we played. If my memory serves me right they were in the state finals for Ohio last year and it looks like they could compete this year,” Stoyer said. “With that being said, we talked about making them earn it and at the beginning of the game, we were not making them earn it. We played football knowing who they were not who we are.

“We have to understand what we have in this building. It has to be tougher than that. We also talked about bringing programs like this into our house because we strive to be a program like that. They came in here they were all business. They knew they had a job to do and that’s something we have to look for and build towards.”

The Eagles had moments of encouragement.

Ethan Stright had a few breakaway carries from the monster John F. Kennedy Catholic defensive front ahead of him.

Sophomore quarterback Logan Groover showed promise and handled himself as best he could under the intense pressure every snap.

The Eagles have six seniors on their roster compared to JFK Catholic’s twelve. Several botched snaps and missed tackles can be attributed to the youthfulness of the Eagles roster.

“We are young. We are really young and there are no bones about it. I have freshman playing varsity ball right now. The first three weeks have been a wake-up call. Now with that being said, they are going to grow up real fast,” Stoyer said. “Hopefully over the long haul it’s good for them. I do credit the seniors I have. They have taken the bull by the horns and they have been good leaders. We have a lot of growing to do and every game is going to be a learning experience.”

“In our program we play a lot of kids that are younger but we also have a lot of kids that don’t start till maybe junior year so we try to be a senior-laden team if we can,” head coach Jody Burkey said. “Most schools today don’t do that. If their freshmen and sophomores don’t get an opportunity they quit and here we try to make sure those kids stay with it so by the time their juniors and seniors they are still with the program. I’m a firm believer that you win with seniors so we try not to have attrition through the years by kids not staying with it cause they don’t get to play.”

John F. Kennedy advanced to 3-1 on the season.

Conneaut dropped to 0-3. They are scheduled to play at General McLane next week in a region match up.