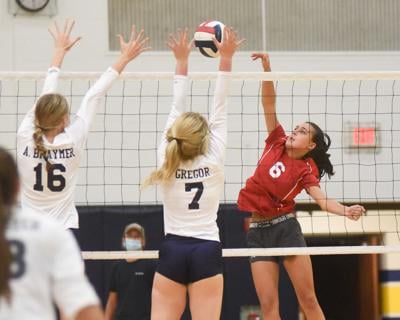 SAEGERTOWN — The Cochranton Cardinals girls volleyball team went on the road and came away with a win against region rival Saegertown.

It was the first meeting of the teams since last November in the District 10 Class 1A championship game. Saegertown won the championship in five sets on their home floor and advanced to the state playoffs.

Last night’s game may provide the Cardinals with a sense of vengeance.

“I hope my players feel that way,” Cochranton head coach Marci Malliard said. “I was sort of feeling that way and wanted to come in here and play well and sort of take it back one match at a time.”

Cochranton started by winning the first set. The Panthers leapt to a 12-7 lead, but the Cardinals fought back. Panther senior and all-state middle hitter Averie Braymer took turns with Cardinal junior Devyn Sokol tomahawking the ball to the floor.

Saegertown went on to win a hard-fought second set 25-22.

“I thought we played really competitive in the first two sets but then they kind of lost it,” Saegertown head coach Justin Johnson said. “In the second set we played great and made defensive plays and passed the ball really well. Then passing went south and we couldn’t recover.”

The third set was all Cochranton.

With the score tied 5-5, Sokol went back to serve. The Cards scored the next 13 points and took a commanding 18-5 lead. Sokol had five aces in the scoring run.

Cochranton won the set 25-10. The momentum from the big win carried over into the fourth set and Cochranton closed out the match.

“I felt like we started to play better towards the end. We just need to be able to serve tough and pass,” Malliard said. “Devyn’s run of serves got us a little pumped up and we were able to roll with that momentum.”

A first-team all-region selection last year, Sokol delivered 13 kills in the game. She also had three blocks and three digs.

“Once we get her to stop trying to kill the ball to the floor at the ten-foot line and start to find deep corners, then things are better for her. She tends to have this feeling that she has to drive the ball into the floor,” Malliard said. “She’s our go to player, but Jaylin did an incredible job in the middle moving around behind Dana and swinging at the ball.

“I was pleased with the performance from everybody once we got going. We knew how to fight once we lost the second game. We came back and played hard.”

“It’s our first match. We had a tournament over the weekend, but with COVID every things been cancelled. I felt like the girls came together and played well,” Malliard said. “We had a hairy start and they’re [Saegertown] not gonna give up. They didn’t have Brittany tonight but I still felt like they played well. It’s hard to stop Averie.”

Saegertown was without all-state outside hitter Brittany Houck. She is expected to play next week, Johnson said.

“She’s an all-state player. She would have received a lot of balls in the serve-receive and of course we got stuck in a couple rotations where we couldn’t put the ball away and normally she would come through at those times, so it had a big impact,” Johnson said. “We still had the chance to extend the match if we would have played well and we just didn’t do that.”

With the loss, Saegertown is now 1-2.

“We have to bounce back quickly because we’re going to Eisenhower on Thursday and that’s a long bus ride,” Johnson said. “We also need to keep pace with everyone in the region.”

Cochranton is now 1-0. The Cardinals are scheduled to play Tidioute Charter at The Bird Cage on Thursday.

M. Dorothy Durney, age 82, of Conneaut Lake, PA passed away peacefully on Wednesday December 1, 2021 at Meadville Medical Center. She was born on February 12, 1939 in Meadville, PA to the late Ivan and Helen (Allen) Burchfield. Dorothy graduated from Conneaut Lake High School. She earned her…