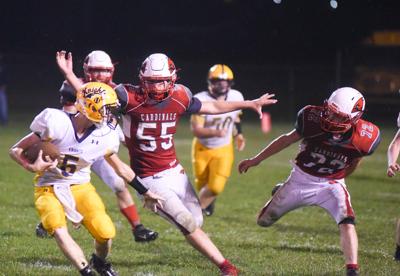 COCHRANTON — In a meeting of the unbeatens, Cochranton was able to down Eisenhower 34-13 behind a stiff defense and the legs of senior running back Jack Martinec.

“It was our hardest test of the year. Eisenhower is a great team, they’re a lot like us,” Cochranton head coach Mike Feleppa said. “They’re physical and play good defense. I thought it was going to be a battle and it was a battle.”

The Cardinals got off to a hot start.

On the first drive of the game sophomore quarterback Noah Cummings faked a handoff to Martinec and rolled to his right where he found a wide-open Blake Foulk in the flats. Foulk caught the ball and ran 36 yards for a score.

After forcing Eisenhower into a 3-and-out, the Cards kept momentum with another touchdown drive. This time, Martinec took the handoff and ran 75 yards for a score. Cochranton was up 13-0 six minutes into the game.

Early in the second quarter Cummings found another uncovered receiver. Cummings again utilized the play action fake and connected with an uncovered Wyatt Barzak in the middle of the field. Barzak ran 29 yards to put the Cardinals up 19-0.

“We thought they were all packed in there and I saw the free safety running with the motion,” Feleppa said. “I thought we could leak our tight end Wyatt Barzak down the seam and we did.”

The Cochranton offense was humming, but so was the defense.

The Knights didn’t gain a first down until midway through the second quarter. On the same drive however, a blown coverage assignment lead to Eisenhower quarterback finding Keegan Eckstrum for a 65-yard touchdown. The Knights cut the lead to 19-7.

The remainder of the second quarter and the entire third quarter was a fight. Neither team could move into scoring position and traded punts.

With about seven minutes remaining in the game, Eckstrum scampered 35-yards for a touchdown. A missed extra point made it a one-score game.

At this point Martinec gave Cochranton breathing room. He found the open field and beat everyone to the end zone on a 50-yard touchdown with four and a half minutes left. It put Cochranton up 27-13.

“When I see open field I know I have to go and get to the end zone,” Martinec said. “My o-line opened up holes for me and they’re counting on me. My line does it for me so I need to do it for them.”

After a Barzak interception, Martinec put the game on ice with 19-yard touchdown run. It marked his third touchdown of the game to pair with 265 yards.

“I go in there with my team and all 16 of us are probably the toughest 16 kids in District 10,” Martinec said. “We go out there against 60-man strong teams and get it done. We are going to keep fighting every week and keep playing ball like we’re playing ball.”

The Cardinal offense put up 34 points against an Eisenhower defense that allowed an average of 18.5 points per game. Cummings passed for two touchdowns and 73 yards on three completions.

Defensively, Cochranton has been stout all year. They came into the game allowing seven points a game. On Friday, they allowed 13 points and 234 total yards. They also had two interceptions and one fumble recovery.

“We gameplan well and I have great defensive coaches. They all do a great job on that side of the ball,” Feleppa said. “I have a great staff and they make my job a lot easier.”

“Being 3-0 feels pretty good. I think the kids are up and they’re happy,” Feleppa said. “They’re playing really hard and they play with a lot of heart and determination. They always believed tonight and never quit even when things got down.”

The Cardinals will face another test next Friday when they take on the undefeated Northwestern Wildcats at home.