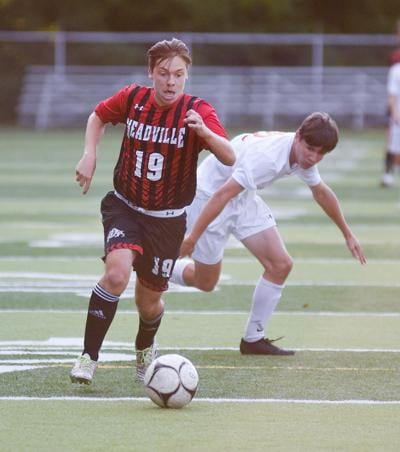 The Meadville boys soccer team was defeated by Cathedral Prep 5-0 at Bender Field in a Region 5 matchup on Tuesday.

The Ramblers dominated possession for the game and didn’t allow the Bulldogs to get many shots on goal. Despite the one-sided nature of the game, Meadville head coach Zane Watson is pleased with his team’s effort and progress.

“Even though the score wasn’t exactly what we wanted, it was a hard fought match. Their effort for the first 35 minutes to keep them to one or two goals really showed a glimpse of what we’re looking for in the program,” Watson said. “The learning that comes from playing opponents like this is worth more than the scoreline could ever be. Seeing a high level team like that is massive for development as a player.

“It’s big to show our younger guys a team that used to beat us by 15 goals is now beating us by five goals. It shows progress and good leadership by our older guys. Hopefully it can set a standard for the future.”

Prep got on the board in the 21st minute when Dylan Danch scored. Bulldog goalkeeper Ace Reese stopped the initial shot, but Danch scored off the rebound.

A Meadville own goal and a Luke Trocki score with two minutes left in the half gave the Ramblers a 3-0 halftime lead.

The Ramblers added two more goals in the second half. They continued to keep the ball in Meadville’s side of the field and had several shots on goal. Though the Rambler offense pounded on the door over and over again, Reese recorded more than 30 saves in the game.

“It’s the best game Ive ever seen a goalkeeper play. Ace was on fire today,” Watson said. “Without him in goal the score wouldn’t has been what it was. Not that 5-0 is a good scoreline, but against a team that’s dominated District 10 for so many years, that’s a good look for our boys.”

Watson also spoke to the leadership role that Reese has taken on.

“He’s a good role model to our younger boys. We don’t really had a goalkeepers coach, so he has been coaching the keepers as well,” Watson said. “To see him shine like that tonight and be a leader on and off the field is really cool to see. It was an excellent performance by him tonight.”

With the loss, Meadville is 1-1 overall and 0-1 in the region. The Bulldogs travel to Erie to face Erie High on Thursday in another region matchup.

Christina Ann Ruhl Farnsworth, 23, of Conneaut Lake died tragically at home Tuesday, September 14, 2021 She was born in Warren, PA October 4, 1997 a daughter of Amy Lee Lutz Ruhl Grubbs and Daniel Farnsworth. She was raised by her mother and step-father, John Grubbs. She attended Cochranton …