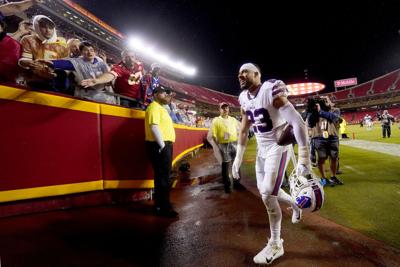 ORCHARD PARK, N.Y. — In putting the finishing touches on Buffalo’s most resonating win of the season, cornerback Tre’Davious White made his way to the sideline after recovering Patrick Mahomes’ fumble with a message to the few Chiefs fans who remained.

In the pouring rain at Arrowhead Stadium, White and the Bills enjoyed a cleansing moment in closing out a 38-20 victory in the early hours of Monday morning. Over a thunderstorm-delayed outing, Buffalo’s offense and defense were lights out in vanquishing the one opponent who stood in their way of reaching the Super Bowl last season.

The 38 points matched the Chiefs’ output in a 38-24 win over the Bills in the AFC championship game in January. Josh Allen’s 315 yards passing and three touchdowns mirrored Mahomes’ 325-yard, three-TD outing the last time they met.

And this time, Buffalo’s defense flexed its muscles by forcing four takeaways after wilting in two losses to the Chiefs last season, including a 26-17 decision in October.

“Last year left a bad taste in my mouth, so we wanted to come back and play well today,” safety Jordan Poyer said. “We knew we were gonna take some punches. But at the end of the day, nobody blinked.”

While a convincing win in Week 5 might not change the past for Buffalo, it does send a clear message that these Bills should be considered true AFC contenders.

Buffalo improved to 4-1, matching the Los Angeles Chargers for the conference lead through Sunday. Just as important, the Bills eased questions of their potential after their three previous wins came against backup quarterbacks.

The Chiefs (2-3) might be experiencing early-season issues on defense, but their offense entered the game tied for second in the NFL with Buffalo in averaging 33.5 points per outing.

While the Bills offense caught the Chiefs flat-footed with a balanced attack, Buffalo’s defense continued validating early-season impressions of being vastly improved.

Despite yielding a season-high 392 yards to Kansas City, Buffalo has yet to allow an opponent more than 21 points this year. The 64 points allowed are the fewest through the first five games of a season in franchise history.

Just as impressive, the Bills have forced three or more takeaways in each of their past four outings.

In limiting the Chiefs to two touchdowns and a field goal on five drives inside Buffalo’s 20, the Bills have now held opponents to scoring five TDs and three field goals on a combined 15 red-zone possessions.

“Honestly, we know how good we can be,” middle linebacker Tremaine Edmunds said. “We’re not surprised as far as the success we’re having. I see it day in and day out throughout the week. It just doesn’t happen (only) on game days.”

An offense finding a balanced identity and not overly reliant on Allen’s arm. The Bills have topped 110 yards rushing in all five games, something they managed just eight times last year, while already scoring seven TDs rushing after totaling 16 last season.

A substandard stockpile of jelly. Bills players complained there was too much peanut butter and not enough jelly on sandwiches the Chiefs provided during a one-hour halftime break due to weather.

Backup QB Mitch Trubisky was credited by safety Micah Hyde for doing a great impression of Mahomes in helping the defense prepare during practice last week. “That dude was just dropping back and running around and it was on us to plaster receivers,” said Hyde, who returned an interception for a touchdown.

RB Devin Singletary is listed as the starter, but continues losing touches and playing time to Zack Moss. Singletary finished with six carries for 25 yards and lost 2 yards on his only reception in playing 15 snaps. Moss had 11 carries for 37 yards and three catches for 55 yards over 42 snaps.

No injuries reported from the game. LB Matt Milano is trending toward returning after missing one game with a hamstring injury.

Buffalo’s redemption tour goes prime-time again with the Bills traveling to play the Titans on Monday night. With a 42-16 win on Oct. 13, 2020, Tennessee joined Kansas City and Arizona as being one of three teams to beat Buffalo last season.