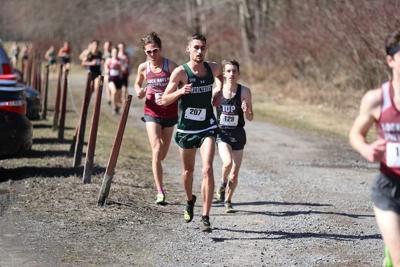 ERIE — After a first college cross country season that was both shortened and moved from fall to spring, Cambridge Springs native Alec Bidwell just wrapped up his first full season at Mercyhurst University.

Bidwell placed 46th overall and second for Mercyhurst at the Pennsylvania State Athletic Conference (PSAC) Cross Country Championships on Oct. 22. He followed this up by running in the Atlantic Regional race and placing 59th overall, a mark that meant narrowly missing the chance to run at nationals in his first full season.

Those two races this spring were the first Bidwell had run in a sanctioned event since the fall of 2019, his senior year at Cambridge Springs.

“It was disheartening,” Bidwell said about losing his senior year of track and field. “My teammates and I had the relay record in mind that we wanted to break, but we did not get that chance.”

Bidwell has nothing to hang his head about for his high school career as he collected several accolades and achievements as an individual and as a part of some Blue Devil teams.

In cross country, he won four letters and qualified for the state meet three times. In basketball, he was a part of a team that won a District 10 title in 2018 and advanced into the PIAA state playoffs. Track and field saw him win four more letters and also was a part of a record-breaking 3,200 relay team that was the first in school history to medal at the district meet. But for the Crawford County product, he continues to move ahead.

“I have some hefty goals for myself, in that I want to qualify for nationals each of the next three years. I wanted to this year, but I did not realize how difficult the Atlantic Region was prior to this year. By my senior year, I hope I am meddling at nationals.”

After his days as a Laker, Bidwell believes he will continue running and wants to compete in half marathons and marathons. Currently, his training allows him to run more than the 13.1 miles that a half marathon requires, making for an easier transition to run some of these races before a full marathon.

For his college decision, choosing Mercyhurst was a logical move for Bidwell as his mother, Halli Bidwell, is an employee of the school. That, along with the opportunity to study cyber security and data science and to run cross country and track, made it the right fit.

“I did not decide I wanted to run in college until pretty late into my high school career,” he said. “I started getting some offers, so my Mom sat me down and told me I should see where it would lead me. When I ended up getting an offer from Mercyhurst and taking a tour, it just felt like home to me.”

Bidwell came in as a data science major, but found out his skills set and interests lie best in cyber security. In the future, he is hopeful of pairing his knowledge of technology with his passion for helping people to have a long and successful career.

Fortunately for the former Blue Devil standout, he has had two great coaches who have helped him to become the runner he is today. He credits Cathy Shader and Eric Walsh with helping him to find a passion for running. Before his running career took off, his primary sport was basketball. However, it did not take long for his parents, Ron and Halli Bidwell, to realize that running was going to help take him places.

Though he may be from a small town, Bidwell leads by example and shows that despite being from a small place, people are still capable of big things.