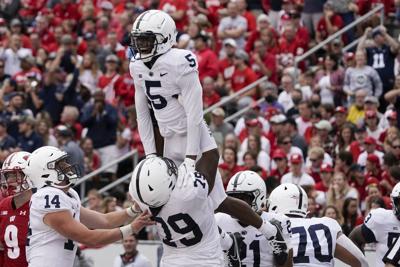 STATE COLLEGE – For the first time in nearly two years, fans will pour inside of Beaver Stadium for No. 11 Penn State’s home opener against Ball State from the Mid-American Conference.

“It’s huge to me being that it’s my senior year,” Penn State wide receiver Jahan Dotson said on Wednesday of the return of fans to Beaver Stadium. “One of the best fan bases in the country. It’s a major opportunity for me, for my teammates who haven’t experienced that. I can’t wait.”

While Dotson and Penn State’s other older players have competed in front of fans inside of the 107,000-seat Beaver Stadium, the experience will be a first for Penn State freshmen, redshirt freshmen and transfers.

Penn State during fall camp had a couple of scrimmages inside of  Beaver Stadium with the hopes of giving players a feel of the experience.

Last week’s season-opener at Wisconsin gave new players a taste of what to expect from a game-day experience, but eighth-year Penn State coach James Franklin said playing at home brings some challenges.

He mentioned ticket requests from friends and family and lodging recommendations as to things players and coaches are presented with during home weekends.

“When you’re at home, there are just more of those things on their plate,” Franklin said this week. “We have a higher percentage of friends and families in town, and if you’re not careful as a young player, those things can be a distraction.”

In highlighting just how new the experience will be for Penn State’s younger players and transfers, Franklin on Wednesday shared part of a conversation he recently had with a Nittany Lions player.

“One of the guys was just asking me about the pregame music, and I’m like, ‘That’s not on my responsibilities,” Franklin said with a laugh.

Somewhat lost in this week’s pregame buildup is that Saturday’s Ball State (1-0) matchup will also mark the first time five Penn State assistants will coach before a full-capacity home crowd.

Penn State has dubbed this Saturday’s game as its 107K Family Reunion, a nod to the much-anticipated gathering, but the reunion isn’t only for the fans

“I’ve been waiting all year for our fans to get back out there,” Dotson said.

Ball State at No. 11 Penn State

Last meeting/series history: This is the first meeting between the programs

Penn State will not release depth charts this season.

Ball State has not released a depth chart this week.

Christina Ann Ruhl Farnsworth, 23, of Conneaut Lake died tragically at home Tuesday, September 14, 2021 She was born in Warren, PA October 4, 1997 a daughter of Amy Lee Lutz Ruhl Grubbs and Daniel Farnsworth. She was raised by her mother and step-father, John Grubbs. She attended Cochranton …