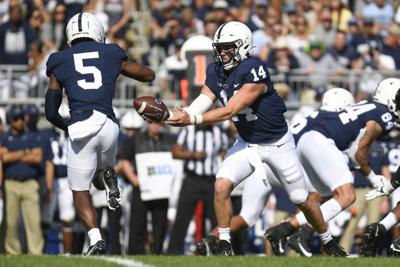 STATE COLLEGE –  Fan bases in Pennsylvania and Alabama haven’t kept their excitement about this week’s Penn State-Auburn showdown a secret.

It’s a Big Ten-SEC matchup that Nittany Lion fans have waited for since the two-game series was announced in June 2016. And it’s one that brings an SEC team to Happy Valley for the first time since Alabama visited in 2011.

While Penn State (2-0, 1-0 Big Ten) and Auburn (2-0) fans are bubbling with excitement about the nighttime White Out showdown, Penn State players and coaches taking a more measured approach this week.

“It’s a game and we have a job to do,” Penn State defensive tackle PJ Mustipher said following Wednesday’s practice. “Coach Franklin talks about going 1-0, and that’s what we have to do on Saturday. I don’t really care about anything else but getting the job done.”

Saturday’s contest marks the first time Franklin — who has coached at Penn State for eight seasons — will face an SEC opponent in the regular season during his tenure with the program.

While Penn State players aren’t allowing themselves to give Saturday’s contest more attention than any other they’ll play this season, they are admittedly eager for the chance to face an out-of-conference opponent from a well-respected league.

“It’s very exciting to play an SEC team,” Penn State linebacker Ellis Brooks said. “They’re a great team, well-coached. They play hard, and I feel like it’s a great opportunity to represent the Big Ten and how we play football.”

Penn State cracked the AP Top 10 at No. 10 this week following a road win against then-No. 12 Wisconsin in Week 1 and a home win against Ball State this week.

Auburn, meanwhile, comes into Week 3 at No. 22 in the AP Top 25 after having outscored its opponents (Akron and Alabama State) 122-10 during the first two weeks of the season.

In facing Auburn – playing just its third game with Harsin at the helm – Penn State doesn’t have much film to rely on in scouting a Harsin-led Tigers team. One thing that Penn State players have noticed when examining early season film, though, are a few shared qualities of familiarities.

“I haven’t played Auburn specifically yet, but I can see on tape that they have guys who are super athletic and physical, and they play hard-nosed football,” Penn State quarterback Sean Clifford said. “But at the same time, we’re excited to play our game, and that’s kind of what we pride ourselves on – being blue-collar and physical football players. So we’re excited for the challenge.”