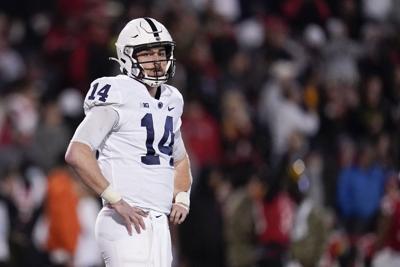 STATE COLLEGE — Penn State closes out its seven-game home portion of the 2021 season today when Rutgers visits Beaver Stadium. The contest marks the 32nd in the series history, which began in 1918.

Penn State clinched bowl eligibility two weeks ago with its win against Maryland. With five wins this season, Rutgers sits just one win shy of clinching bowl eligibility for the first time since the 2014 season.

Here are three things to watch as Penn State closes out its 2021 home schedule against Rutgers this weekend.

If there’s one positive to take away from last week’s loss to Michigan, it’s that Penn State’s ever-frustrating rushing attack was the most productive it’s been in weeks. Nittany Lions players and coaches have said an emphasis has been placed on improving the running game over the past few weeks.

Penn State’s 109-yard effort – including sack yardage – against the Wolverines marked just the fourth time the season the Nittany Lions ended a contest with 100 or more yards rushing.

Penn State coach James Franklin earlier this week mentioned he’d like to use some of Saturday’s game as an opportunity to play some of the team’s younger players, specifically on the offensive line.

Offensive tackles Caedan Wallace and Rasheed Walker didn’t practice on Wednesday because of what Franklin described as a non-coronavirus-related illness that has affected the team.

Depending on Wallace’s and Walker’s availability on Saturday, offensive linemen Landon Tengwall, Olu Fashanu and Bryce Effner could receive increased playing time. Tengwall, a freshman, has yet to play a snap for the Nittany Lions, but Franklin this week said the first-year player did receive an increased load of practice reps.

It’s been an up-and-down season for the Scarlet Knights. After a three-game win streak to begin the season, Rutgers proceeded to drop four straight against Michigan, Ohio State, Michigan State and Northwestern. The Scarlet Knights have since won two of their last three contests.

In a 38-3 win against Indiana last week, Rutgers’ defense accumulated six turnovers and held Indiana to just one first down on 14 attempts.