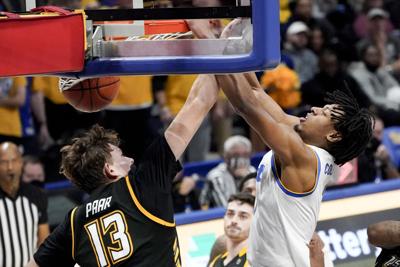 PITTSBURGH — After the Pitt men’s basketball team won its first game of the season on Tuesday night, coach Jeff Capel said the Panthers might have to win ugly with just 10 scholarship players and little depth at guard.

The Panthers got another ugly win on Friday night as they defeated Towson 63-59 at the Petersen Events Center.

With just under five minutes remaining, Towson’s Nicolas Timberlake made a 3-pointer that broke a 48-all tie. Pitt freshman Nate Santos missed from 3, but forward Noah Collier was able to snag the rebound and feed the ball to Femi Odukale, who in turn passed it back to Collier. Collier drove to the basket for a layup and drew a shooting foul in the process. He made the ensuing free throw to tie it at 51.

The Tigers weren’t done, as Cameron Holden made two free throws. Collier responded with a dunk on the other end. Towson’s Chase Paar made a second-chance layup to give the Tigers a 55-53 edge, but the Panthers refused to quit. Pitt sophomore William Jeffress’ jumper knotted the game up once again and a Collier steal led to an Odukale transition 3-pointer from the top of the key – his first points of the night – to put the Panthers up 58-55 with 2:23 remaining.

After nine lead changes in the game, Pitt would go on top for good with Odukale’s bucket.

Santos paced the Panthers with 14 points, including four made 3-pointers. He also led Pitt with eight boards. Burton and Oladapo each added 11 points and four rebounds.

The largest lead of the game was seven points, which the Tigers led by early in the second half. Pitt never led by more than four.

The Panthers suffered a scare midway in the first half when Odukale landed awkwardly on his ankle and headed to the locker room, making Pitt’s already tenuous depth at guard even worse. Odukale was able to return late in the first half, allowing the Panthers to breathe a sigh of relief.