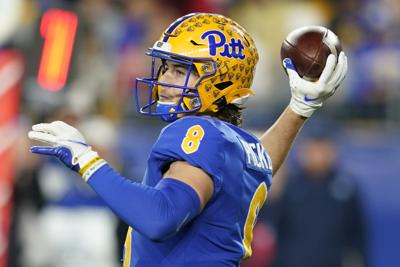 PITTSBURGH — Quarterback Kenny Pickett and 11 other “super seniors” will play their final home game at Heinz Field when Pitt hosts Virginia this afternoon.

They have a chance to go out with a bang – if the No. 20 Panthers (No. 18 CFP) win, they’ll clinch their second ACC Coastal Division crown in four seasons.

“This senior class has been special. It’ll get more special each game. I mean, it can be historic what they’ve done,” Pitt coach Pat Narduzzi said this week.

In addition to winning their division, a Panthers’ victory would secure Pitt’s first season with more than eight wins since 2009.

For this group of seniors – 23 in all, including the 11 super seniors – it’s been a long a road. Senior long snapper Cal Adomitis, who has played in 60 games for the Panthers over the past five seasons, recounted linebacker John Petrishen’s speech during training camp. Petrishen is in his seventh season of college football and his third at Pitt after previously attending Penn State. He had previously gotten eligibility waivers due to seasons lost because of injury.

“I think it’s just the fruit of a lot of years of hard work,” Adomitis said of the team’s success this season. “One of the things I really liked that actually JP said in his senior speech during camp was talking about how a bamboo tree grows and how you water it for years and years – I think it’s actually four years you water it before seeing any growth above the ground – and come the fifth year, it shoots up like 90 feet in a matter of weeks.

“That was something I think we were all thinking about and could be an analogy for this group of guys,” Adomitis continued. “We knew we had the potential and the skill to win the ACC championship, and we’re definitely on that path right now and we just gotta keep at it.”

Despite the division championship being on the line this week, Adomitis and his teammates are trying to treat it like any other game.

“It’s huge, but with that, there’s also the aspect of not wanting the game and the energy get too big,” Adomitis said. “It’s the same game. It’s the same game we’ve been playing now for what, 10 weeks, so we just got to prep the same way.”

“This is just a game,” Baldonado said. “This is a really important game. There’s a lot of stakes. We could achieve a lot thanks to this game, but it’s just one of the other games. It’s just as important, and everybody has to do their job in order to win.”

The emphasis on winning another football game is making senior day take a backseat, even for the seniors themselves.

“That’s really the focus right now,” Pickett said. “It’s kind of hard to think about senior day. I think it’s something that I’ll be thinking about after more than before.”

However, Pickett is still going to appreciate getting a moment with his mom and dad before he starts his 47th game for Pitt at 3:30 p.m. Saturday afternoon.

“To be able to run out to my parents, give them a hug and take a moment to enjoy it before the game starts is going to be special,” Pickett said.

This group of seniors has imparted plenty of wisdom to the underclassmen. Sophomore wide receiver Jordan Addison discussed what he’s learned from the seniors this week.

Addison says he has learned a lot from one of the most veteran players on the team in wide receiver Tre Tipton. An Apollo-Ridge graduate, Tipton is in his seventh season of college football. Like Petrishen, Tipton was granted eligibility waivers due to injuries. Tipton is one of only eight players in the country who has played a seventh season at the same school.

“He teaches us some things that most people wouldn’t know,” Addison said of Tipton. “He’s a veteran guy. He has a lot of tools in his toolbox that really helps out the younger guys.”

To beat Virginia and claim the Coastal crown, the Panthers will have to stop another prolific offense nine days after an overtime win against North Carolina. Led by quarterback Brennan Armstrong, the Cavaliers rank fifth in the country in total offense, three spots behind the Panthers.

“Having a top offense (like) we have this year, everyone usually talks about offense against offense. Usually when I get a chance to talk to the team, I tell them, ‘It’s not offense against offense, it’s us against them,’ ” linebacker SirVocea Dennis said. “We have a great defense and if we execute well and play fast, we can stop anybody in country.”

Pitt’s mantra this season has been “we not me” – the idea of putting the team ahead of the individual players. Narduzzi says this senior class has personified that motto.

“I think the biggest thing about this senior class is they’re selfless, all of them,” Narduzzi said.

For Pickett, whose first start came at Heinz Field in an upset of No. 2 Miami on Nov. 24, 2017, the chance to finish off his last season by clinching the division in his final home game would put an exclamation point on a remarkable college career for Pitt’s all-time leading passer.