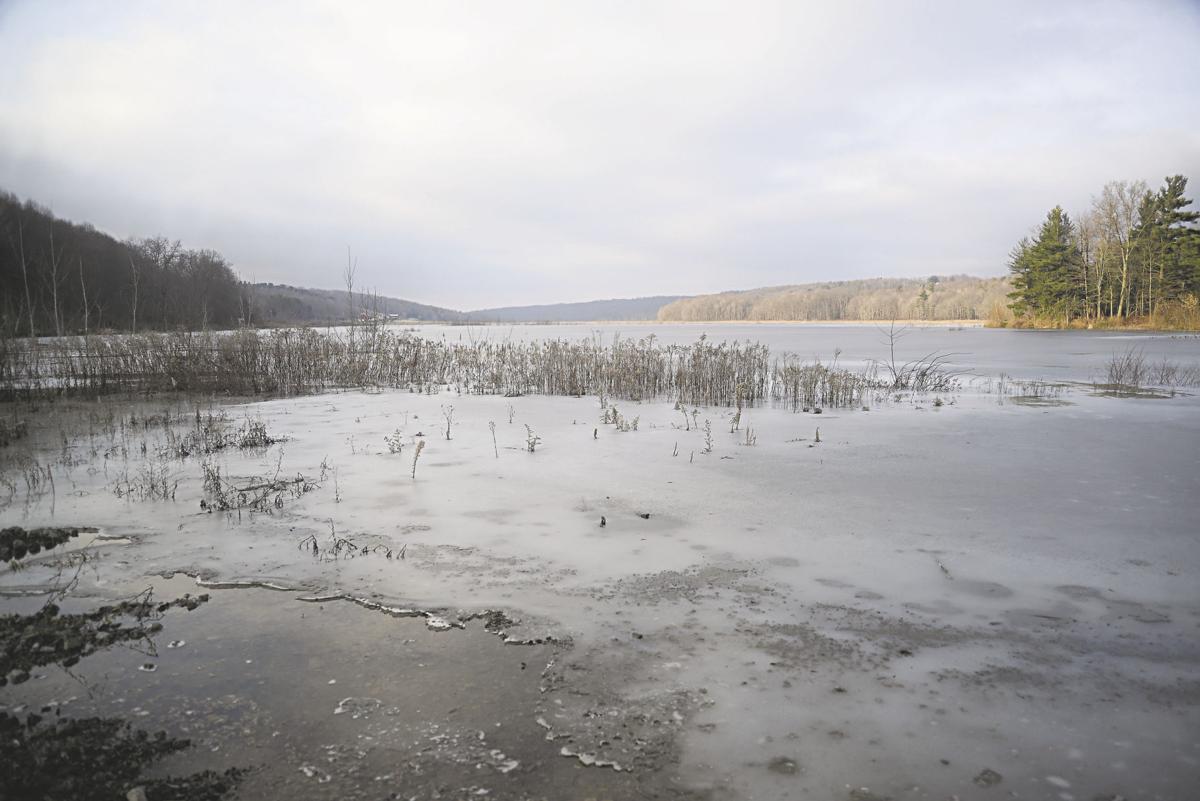 The water level at Tamarack continues to rise after the completion of the $12.2 million rehabilitation project. 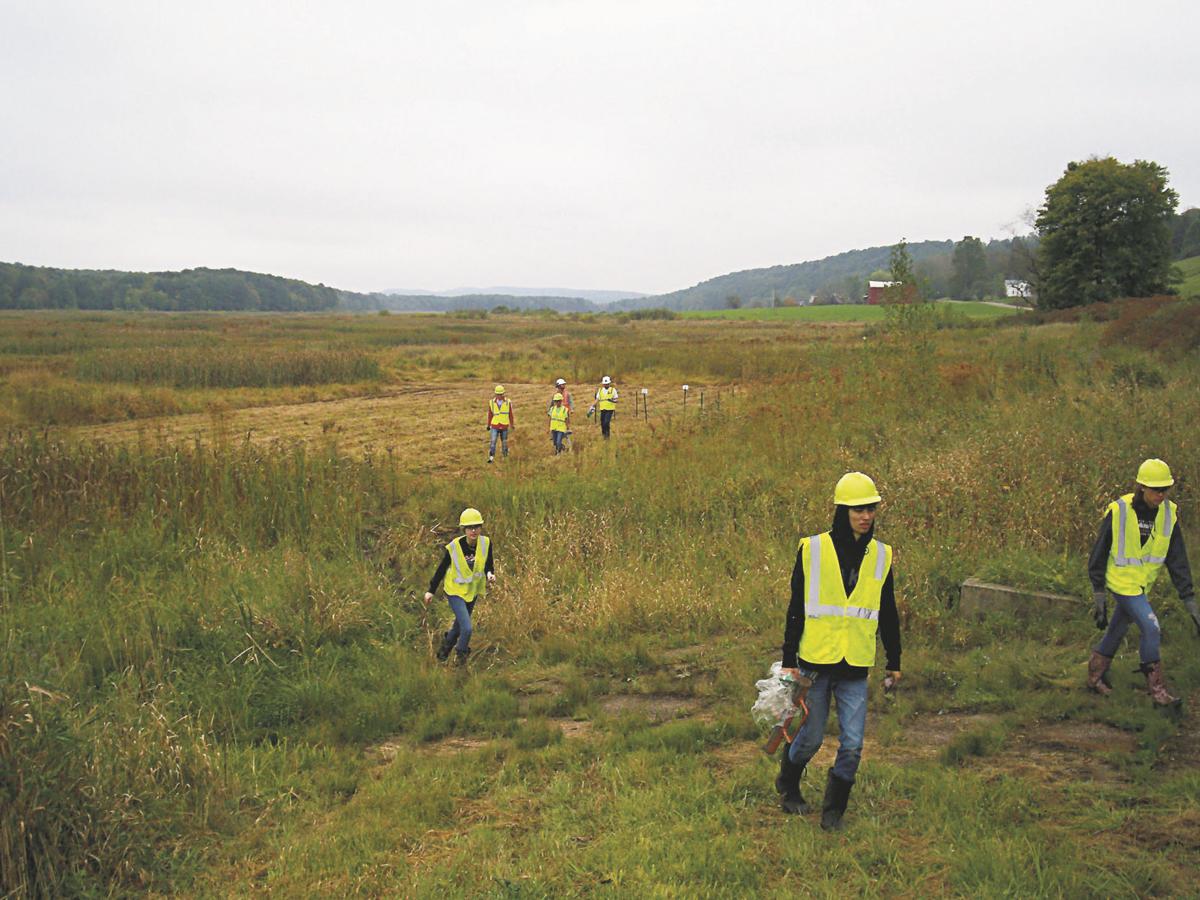 Students from Cochranton Junior-Senior High depart after completing work in preparation for aquatic vegetation exclosures that they helped to install this fall at Tamarack Lake.

Editor's note: A few weeks ago, the Tribune provided readers with what we believe are the most important Crawford County-area stories of 2019. We then asked our readers to rank the stories from No. 1 (most important) to No. 15 (least important).

The top story of 2019 is an epic whopper of a tale, but this time it’s not the size of the fish that’s likely to increase with each retelling but the length of the dry spell in between fishing expeditions on a beloved body of Crawford County water.

It’s not quite fully there yet, but the water level is steadily, if slowly, inching its way up.

“It's nice seeing the new dams in place and the water returning,” West Mead Township Secretary-Treasurer Jill Dunlap said in mid-December. “There is a lot more water in it than at this time last year and we are being told that by spring, it should be at normal levels.”

Officials at the Pennsylvania Fish and Boat Commission, which maintains the lake, confirmed the anticipated completion date.

“The lake will continue to refill over winter and we expect to fully reopen in spring 2020,” Communications Director Mike Parker said. “It’s definitely one of our success stories in the region because of all the local involvement and everyone being engaged.”

And water isn’t the only thing returning to Tamarack.

Fish are returning as well. PFBC began restocking the lake over the summer: 11,000 golden shiners and 28,000 fathead minnows were released to provide forage for larger fish and 5,500 largemouth bass fingerlings, each about 6 inches long, were released in the lake this year, according to Parker.

In all likelihood, some unwanted carp also remain among the forage fish and bass that were added, according to Parker, since small pools of water remained in the lake even years after it was drained. Adding the largemouth bass fingerlings is an attempt to “jump-start the predator-prey relationship and eliminate some carp still existing in there,” Parker said.

The forage fish are expected to reproduce rapidly next year, when more panfish will be added. Over the next three years, sunfish, crappies and eventually muskies will be released. During that time, and likely for another year or two after, fishing will remain strictly catch and release as the fish populations are established.

Empty since 2012, Tamarack Lake began its resurgence in 2018 with the construction of two new dams at either end of the reservoir. The comeback continued throughout 2019 as construction wrapped up and refilling began. In June, a ceremonial valve-turning took place with state and local officials, neighbors and the media gathering to mark the symbolic end of $12.2 million rehabilitation project.

Later in the summer, dry hydrants for use by area fire departments were installed and by August the first batch of bass fingerlings had been released.

In early fall, work on the docks and parking areas was finished. Enhancements continued in the fall with students from Cochranton Junior-Senior High and members of the Friends of Tamarack Lake, the grassroots organization that helped spur the dam rehabilitation project, joining personnel from PFBC and Crawford County Conservation District.

The students built installed fishing line recycling stations at the Springs Road boat launch at the northern end and at one launch on the eastern side of the lake. The stations will be maintained by the Friends of Tamarack Lake, with more stations planned for next spring around the time the refilling process is complete.

In addition, the students participated in a project that is the first of its kind for PFBC and CCCD, according to Brian Pilarcik, watershed specialist with the conservation district.

“At this point it’s a demonstration project to see if we can get it to work,” Pilarcik said of the installation of exclosures in areas adjacent to three launch sites around the lake.

For now, the exclosures are on dry land, but by spring they should be underwater, with the pens installed by students keeping out animals like turtles and waterfowl that might otherwise eat the native aquatic vegetation that Pilarcik hopes will thrive inside the fenced areas.

Without such exclosures, growing such plants would be “almost like putting out a salad bar for things that eat aquatic plants,” he said.

With Tamarack empty for seven years, the bottom of the lake is a blank slate, according to Pilarcik, but as soon as it’s covered with water, boat traffic and waterfowl are likely to introduce invasive nonnative species like hydrilla, a vexatious weed that grows quickly and aggressively, forming a dense covering like a shag carpet that leaves no room for fish and no food for waterfowl, according to Pilarcik.

To prevent such an outcome, the Cochranton students will return to the exclosures in the spring to plant eelgrass, water willow, pickerel weed and arrow arum, species that are much more beneficial to fish and waterfowl as well as to the stability of the lakeshore banks, in hopes that the plants will take hold before invasive species have a chance to. Pilarcik said the plan is modeled on similar efforts in Texas, where it has worked well in already-full lakes.

“The fact that Tamarack was being refilled — it was like everything was lining up for it,” Pilarcik said. “It’s a first for Fish and Boat. We’re cautiously optimistic, but we’re pretty excited about trying to get this off the ground.”