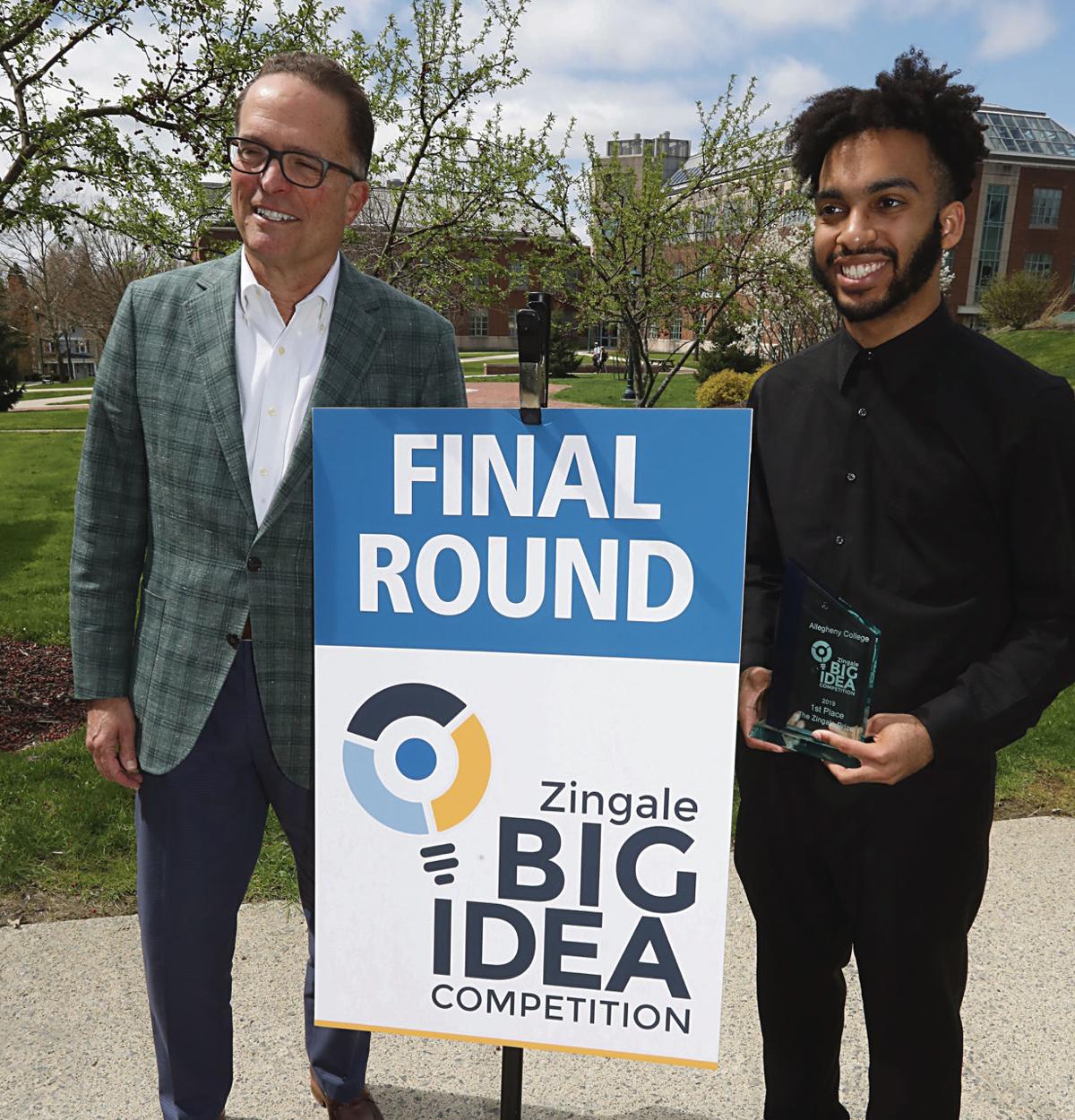 Lance Zingale (left), a 1977 Allegheny graduate and competition judge, is pictured with Christian Walker. The Zingale Big Idea Competition is supported by Zingale and the Burton D. Morgan Foundation. 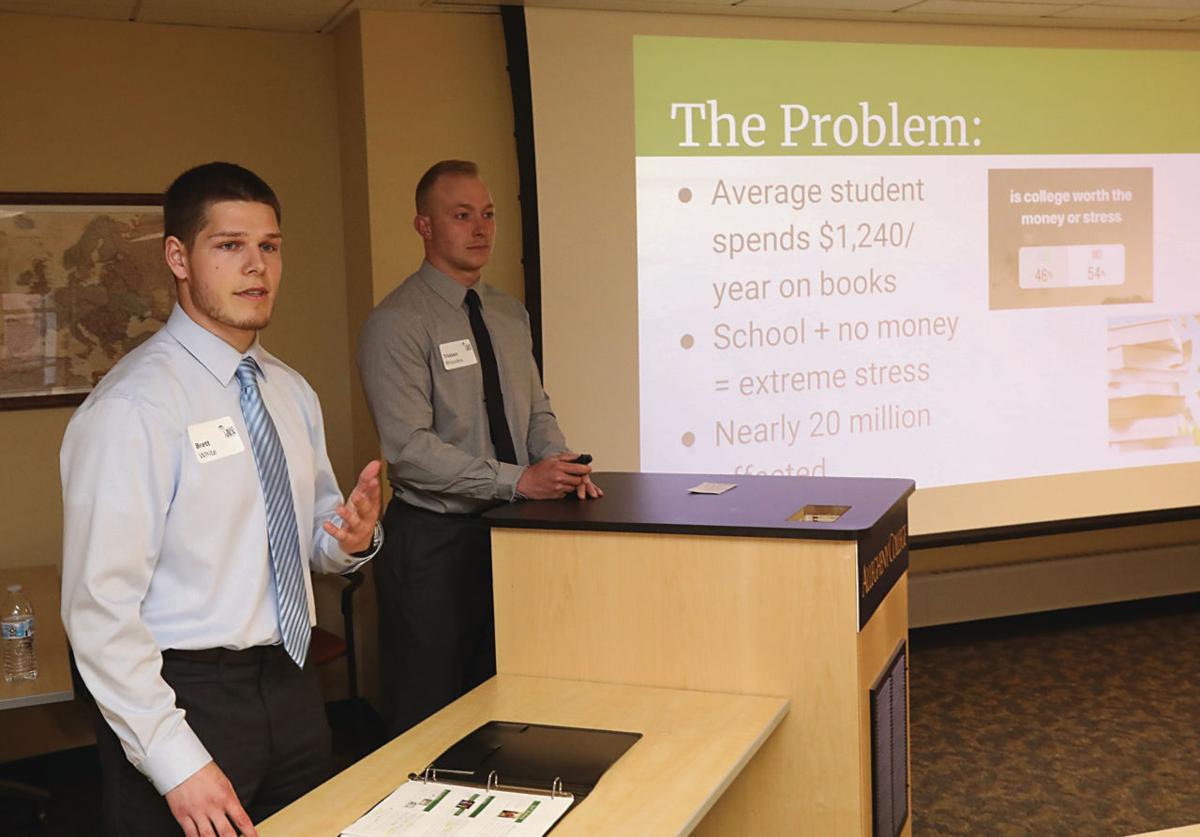 Allegheny College students Brett White (left) and Tristan Rhoades present their business idea in a preliminary round of the 2019 Zingale Big Idea Competition.

Every year, Allegheny College hosts the Zingale Big Idea Competition, allowing students to propose their entrepreneurial ideas to a panel of judges and potentially winning investment funds to start up their own business. This year, things are going to be a little different.

Allegheny College has opened up the competition to Crawford County residents, creating a separate division of the contest specifically for members of the public to pitch their business ideas for the chance to win a part of the $10,000 offered in cash prizes throughout the contest. While the contest has previously been opened to students from Grove City College and Westminster College alongside Allegheny students, this is the first time non-students have been invited to participate.

Chris Allison, an entrepreneur-in-residence at Allegheny College, helps organize the Zingale Competition each year alongside Sarah Holt, a member of the economics and political science departments at the college. Allison described the contest as a "much more realistic version of 'Shark Tank,'" referring to a reality TV show based around entrepreneurs seeking financial support for their ideas.

"We wanted to ... emulate the process of pitching a business idea to a professional investor," Allison said.

Allison is well-versed in the business world, having served as chairman and chief executive officer of a technology startup known as Tollgrade Communications Inc. for 10 years. By the year 2000, the business was valued at $2 billion on the NASDAQ exchange. He has also served as an angel investor for three different businesses.

The competition consists of two rounds, with Allison estimating that about 60 percent of contestants advance from the first round to the second. Competitors are able to take feedback from the judges given in the first round and improve their proposal heading into the final contest.

"The students that win are the ones that take the input from the judges and actually change their presentations overnight for the finals," Allison said.

Competition between students and members of the public will be kept separate, meaning there will be two different grand prize winners. In fact, there will be a separate set of judges for the two different tracts of the competition. The student judges are made up of Allegheny alumni who have distinguished themselves in the field of business, while the public judges are made up of local business people and members of economic development agencies.

Allison noted that winners of the competition have come from various backgrounds and fields of interest, with one of last year's winners being a studio art major. Last year saw a tie for the first place grand prize.

The idea to expand the competition to Crawford County residents came from Allegheny College's new president, Hilary Link, who began her tenure last July. Link said she noticed a divide between the campus and city of Meadville and hoped to bridge the gap by involving the wider community in the competition.

"I think one of the things that's surprised me the most is learning from various community members how little they know the college and actually take advantage of the college," she said.

Link brought up an example of a meeting between the college's international students and members of the Meadville Woman's Club held a few months ago.

"A lot of these women who were in their 70s — born and bred and lived their whole lives in Meadville — said ... they've never been on the campus before," she said. "And that to me was so disheartening and I thought 'OK, we really have this reputation of being the college up on the hill and we really need to work a lot harder to take down that perception.'"

Link said she hopes opening up the competition will help "demystify" the college to Meadville residents who have never been on the campus, as well as lead to potential career opportunities being created in Meadville. Allison expressed similar sentiments.

"If you look at what creates jobs in this country, it's not large corporations, it's small business," he said. "More importantly, it's new business, and if you look at the average funding for a start-up business in the United States, it's less than $25,000 and most of that is done with a credit card."

To assist the public in preparing for the competition, Allegheny College is offering three workshops focused on key points of the entrepreneurial process. These workshops have been offered in the past to non-business students wishing to get involved in the Zingale Big Idea Competition, but this is their first year involving non-college students.

The first of these sessions is Tuesday and will focus on coming up with ideas. The second, which is Feb. 20, will be about building operations plans and market strategy. The final session, scheduled for March 24, will inform attendees about how to pitch their ideas to potential investors.

The workshops are from 12:30 to 1:15 p.m. on their respective days at Quigley Hall on Allegheny College.

The Zingale Big Idea Competition is in its 13th year and takes place over a three-day time period, from April 23-25. It is named after Lance Zingale, a 1977 Allegheny graduate who contributes to the contest's prize pool and regularly serves as one of the judges.