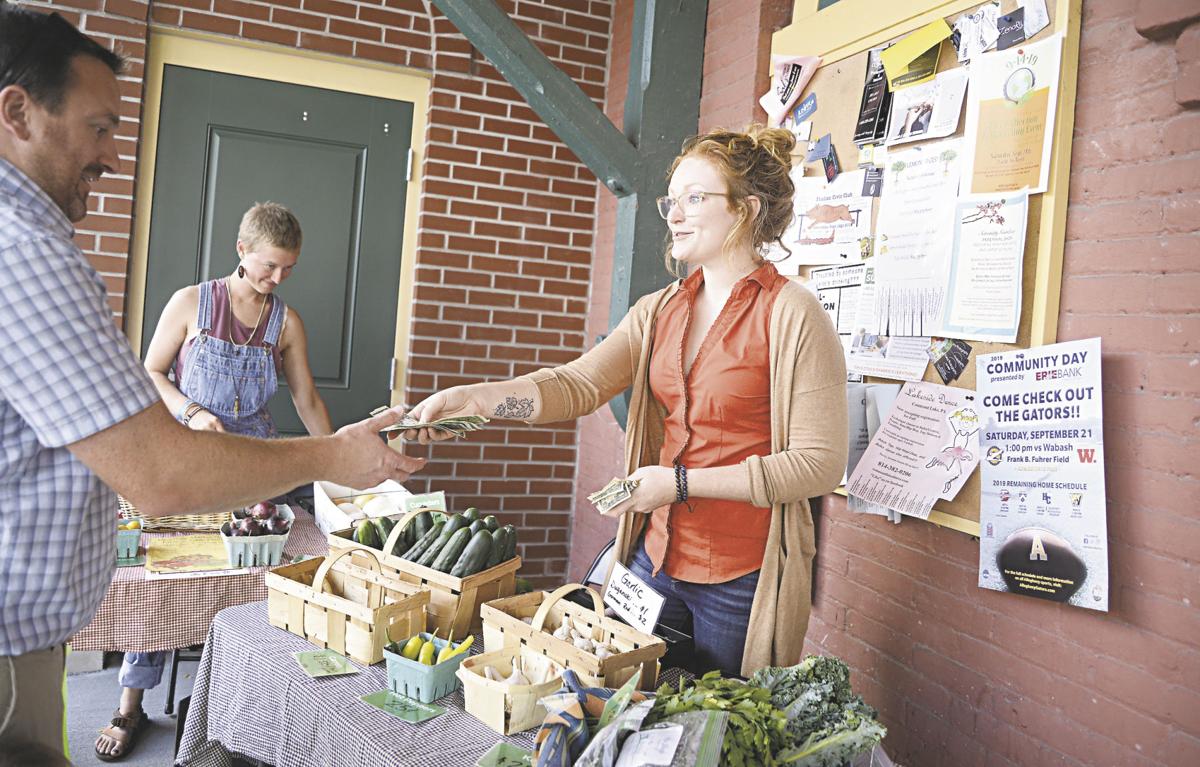 Autumn Vogel of Meadville hands change to a customer of the Mobile Market House recently. 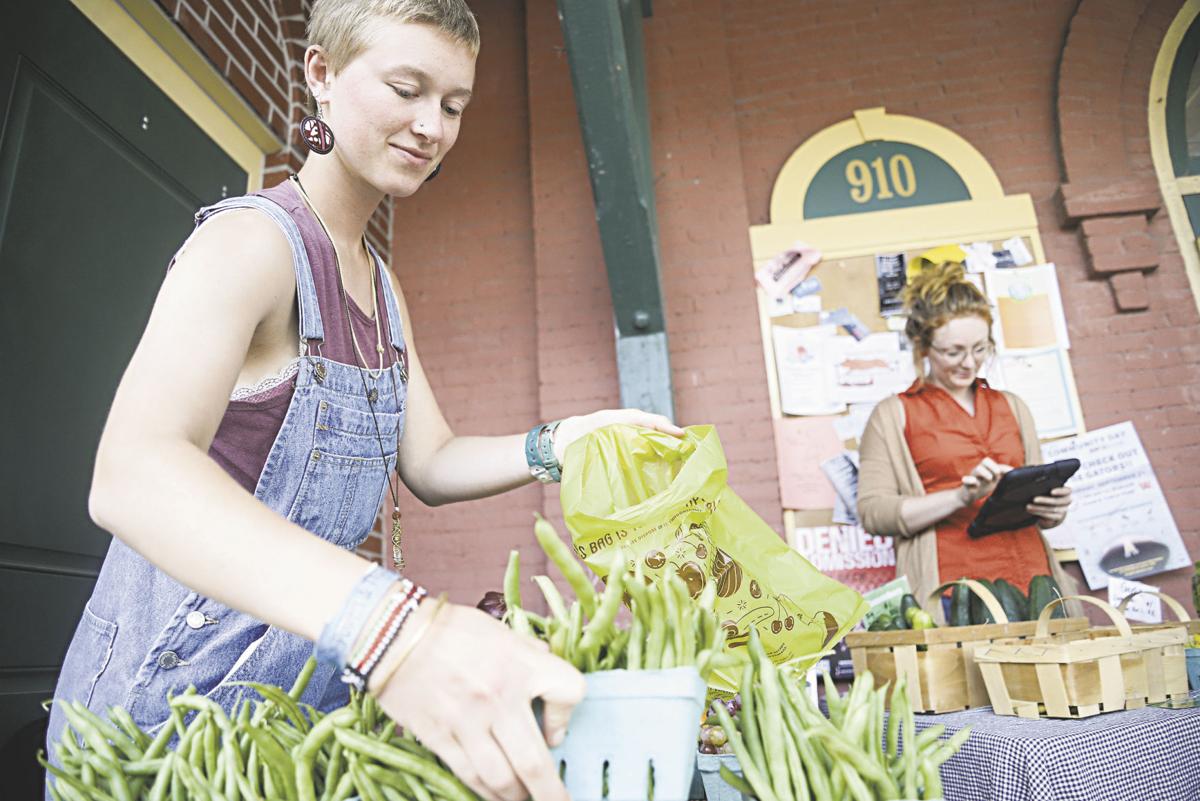 Merryn Spence of Meadville picks out a carton of locally grown green beans for a customer while working at the Mobile Market House recently. 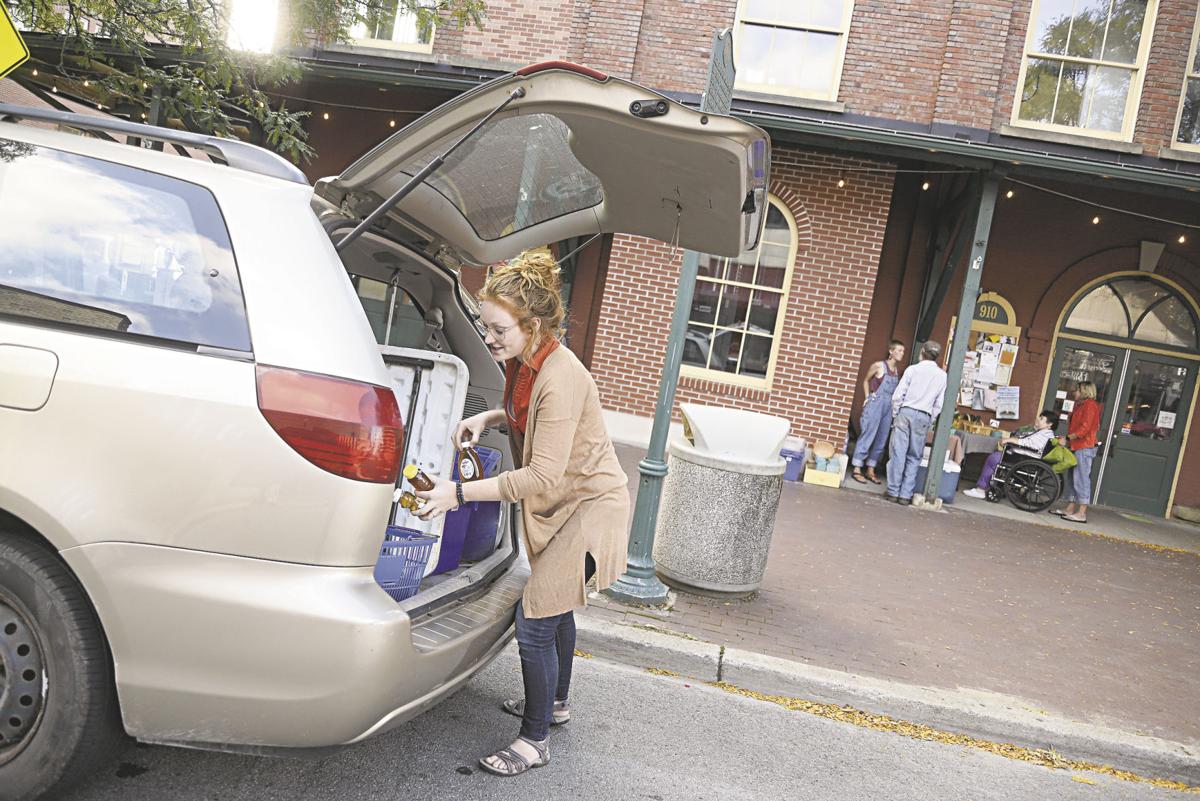 Autumn Vogel of Meadville gets a few bottles of honey out of a van currently being used for the Mobile Market House since the bus broke down recently.

The wheels on the Mobile Market House bus have ceased to go ’round and ’round.

Two years after it was acquired, the retrofitted Crawford Area Transportation Authority minibus that brought a varied selection of locally grown produce and other items to locations around the city has made its final stop. But while the bus itself has gone out of service, the market program it transported continues to roll on.

To support the Mobile Market House’s efforts to acquire a vehicle to replace the former CATA minibus that had been its primary means of transportation, call Alice Sjolander at the Market House at 336-2056 between 10 a.m. and 5:30 p.m. weekdays.

The vehicle’s transmission failed, according to Devon Stout, who chairs the seven-member authority that oversees the Market House and its mobile offspring. The cost to replace the transmission in the 2010 Ford E450 is prohibitively high, Stout said, but even without its wheels the Mobile Market House continues to get out and about.

Thanks to alternative transportation provided by friends and supporters of the Mobile Market House mission, the portable purveyor of produce has continued to make its alternating rotations of 11 stops one week followed by nine stops the next.

Continuing the program’s mobility, even without its easily recognizable bus, was important, according to Stout, and the goal is to keep it going through September despite the loss of the bus.

“The Mobile Market allows us to reach underserved parts of the Meadville community,” Stout said, “and expands our reach with people who might come to Saturday farmers markets as well.”

Those goals fit with the new mission statement adopted in August for the Market House as a whole: “The Meadville Market House supports and promotes local, sustainable agriculture, connecting the public with local farmers and other producers in an economically viable Marketplace.”

The bus, with its rooftop solar panels powering refrigerated coolers, allowed the Mobile Market House not only to feature typical farmers market-type produce but even to carry the sorts of products more familiar from traditional Market House: milk, eggs, cheese and meat as well as dry goods like jam and preserves.

The good will and publicity that have resulted from the mobile program have been worth the expense, according to Stout.

“At this point, we are OK with taking a bit of a loss on this program as we believe it will continue to grow and be self-sustaining in the future,” he said.

The program, now in its third year, has cost $7,545 through the end of August and generated $3,500 in revenue, Stout said. Additional support has come in the form of donations of several hundred dollars from Palmiero Toyota and Acutec Precision Aerospace Inc. and a $2,500 voucher program funded by Meadville Medical Center, he added. In the past, August and September have proven the biggest months for sales, so Stout was optimistic that the program would come closer to the break-even point for the year.

The big challenge, however, is finding a permanent replacement vehicle. Ideally, Stout would like to acquire something like another minibus so that the shelving, coolers solar panels and other features retrofitted into the original bus could be reused.

One possibility Stout has his eye on is another decommissioned bus, and it’s a possibility that CATA Executive Director Tim Geibel was optimistic about as well.

“CATA is a committed partner to the Mobile Market House,” Geibel said, “and we would be glad to work with the group again to help with their vehicle needs.”

After CATA buses reach the end of their estimated useful lives — five years and 150,000 miles for a minibus like the one that housed the Mobile Market House — they can be sold, scrapped or donated for community use, Geibel said.

“CATA anticipates delivery of 10 new paratransit vehicles within the next six months,” he added, “and will have eight to 10 vehicles eligible for disposition.”

Should one of those vehicles become the Mobile Market House’s new set of wheels, the program still has a lot of work ahead of it, according to Stout. The equipment from the old vehicle would have to be removed and installed in the new one before the market could be back on the road in its usual style next year.

To keep the market returning to locations like Forest Green Estates, Lincoln Avenue Grocer, CHAPS and the Common Roots house at 1189 S. Main St., the program needs to keep selling leafy greens and attracting additional support, according to Stout.

“We really need to make sure we bring in income and donations to keep the Mobile Market economically viable,” he said.

Edgerton, Ohio - Margaret A. Olson, age 73, of Edgerton, passed away Wednesday evening, February 12, 2020 at Park View Nursing Center in Edgerton. Margaret was a homemaker who enjoyed making and selling crafts. Margaret was born on February 5, 1947 in Franklin, Pennsylvania, the daughter of …