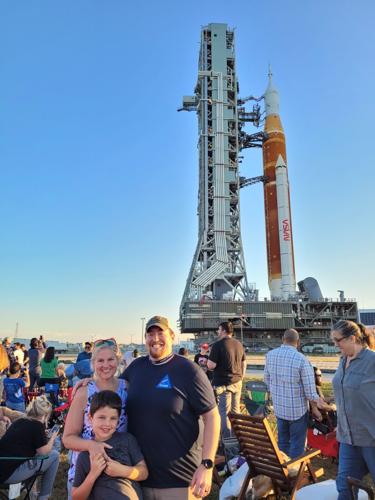 Slade Peters, wife Candee and son Kannon stand in front of the Artemis I rocket as it rolled from the Vehicle Assembly Building to the launch pad. 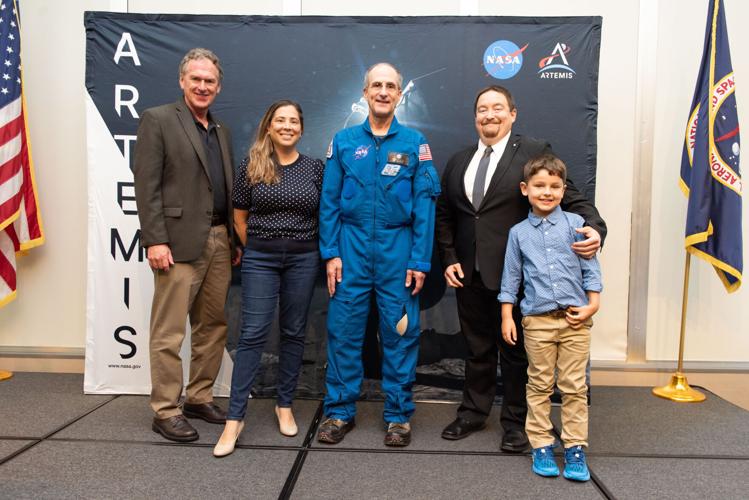 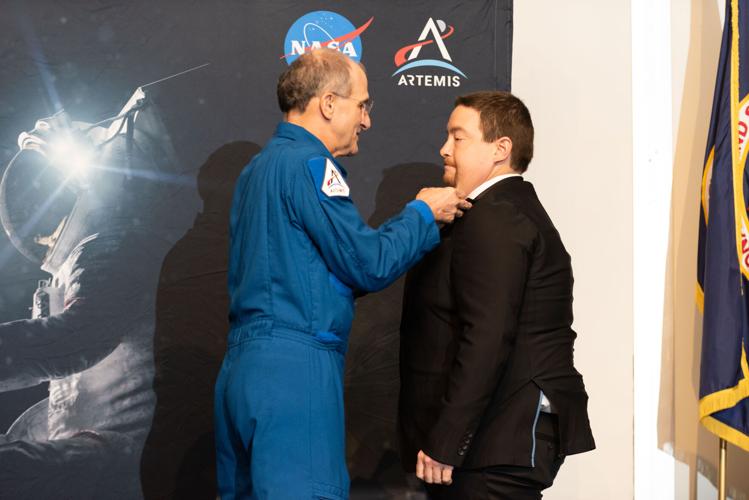 Slade Peters, wife Candee and son Kannon stand in front of the Artemis I rocket as it rolled from the Vehicle Assembly Building to the launch pad.

Slade Peters was milking cows in the milking parlor at his family farm when he got the telephone call of a lifetime.

“I had graduated from Penn State and went back to the farm while looking for other jobs,” Peters said. “I got a job offer from New Holland, and at the same time, I got a call from NASA, asking if I wanted to work as a propulsion engineer on the space shuttles to help get the space shuttles ready for launch.”

That was in 2006. The call was from a National Aeronautics and Space Administration branch chief officer asking if Peters wanted to go to John F. Kennedy Space Center in Florida to work.

For the past 16 years, Peters has been based out of Kennedy Space Center located in Merritt Island.

Peters, 38, wife Candee and son Kannon, 8, live in Viera, Fla., about 40 minutes south of Kennedy Space Center, where they just built a house.

Peters recently accepted a temporary promotion as the contracts and configuration management branch chief within the program business office.

At the time the nomination for the Silver Snoopy award was submitted, Peters was an Exploration Grounds System (EGS) ground operations manager for the Artemis I mission. EGS is the program at Kennedy Space Center that is responsible for building, processing/testing and launching the integrated Artemis launch vehicle, as well as recovering the Orion capsule after it lands in the Pacific Ocean off the coast of San Diego, California.

Astronaut Don Pettit nominated Peters for the award. The Silver Snoopy was flown on NASA’s SpaceX DM-1. Pettit filled out a nomination form and wrote a letter of commendation to Peters.

Peters received the Silver Snoopy for his work as the NASA landing and recovery ground operations manager in March 2020. The nomination letter details that the team was in San Diego performing an Underway Recovery Test, which uses a test capsule to practice recovery operations with NASA and U.S. Navy teams. While performing the preparations for the test, Peters led the team through an active-shooter preparation event at the naval base. He led his team to shelter in place, ensured all personnel were accounted for and quickly communicated up-to-date status to program management back at Kennedy Space Center until the situation was resolved.

Following the active-shooter event, prep was completed and the team set out to perform the practice testing. While underway, the COVID-19 worldwide pandemic occurred, and the decision was made to cut the test short and get the team home quickly. Peters worked with program management at Kennedy and the NASA recovery director on the ship to work logistics to get the NASA team back to shore and get support services lined up. Peters also led the team to get the ship unloaded, hardware into storage, and personnel home more quickly than had ever been done and in a safe manner.

In his letter to Peters, dated Aug. 4, 2022, Pettit expresses the astronauts’ thanks for Peters’ outstanding support and excellent leadership.

“We in the flight business know that success in our space endeavors is measured by the performance of individuals like you,” Pettit stated in the letter. “The exceptional manner in which you have carried out your responsibilities exceeds normal requirements and demonstrates pride in your work.”

Pettit went on to state, “As a symbol of appreciation, please accept the astronauts’ personal award for professional excellence, the Silver Snoopy. We hope you’ll wear it with deserved pride, knowing it is given only to those individuals whom we regard as the best in their respective professions.”

During an awards ceremony, Pettit pinned the Silver Snoopy on Peters’ lapel. Peters’ wife and son attended the ceremony.

Peters had met Pettit prior to being nominated for the award.

“I had actually interacted with Dr. Don Pettit during that same Underway Recovery Test in March 2020. He went underway to observe the testing because this recovery method could be utilized to help recover the astronauts after they land inside the capsule for the second Artemis mission in a couple years,” Peters said. “It was very cool to receive the award from him since he had been part of that same trip.”

Peters was honored to receive the Silver Snoopy.

“I never dreamed that a farm kid from Meadville, Pennsylvania, would have the opportunity to work for NASA at Kennedy Space Center, much less receive one of the most prestigious awards that can be handed out to the NASA workforce,” he said. “Receiving the Silver Snoopy award, or the astronauts’ ‘personal award,’ is an honor that I am both proud and extremely humbled to receive and I’m forever grateful.”

Peters grew up on his family farm, Spruce Row Farm, about 3 miles outside of Meadville toward Cochranton. His parents are Janet and Jeff. He has a sister, Jessica, and a brother, Cole. At that time, they milked about 120 to 130 jersey cows. Today, they milk about 170 cows.

It’s not easy to go from farmer to NASA civil servant. Peters said he owes everything he has to his family and friends and the lessons and values he learned while growing up on the farm and in Meadville.

“We grew up watching meteor showers with my parents, when Dad and Mom would wake us up to go out and watch the skies late at night,” Peters said. “Growing up, I always followed space shuttle launches on TV, but never thought I’d get a chance to work for NASA on manned space flight missions.”

Then, how did Peters go from being a farm boy to a NASA civil servant? Well, he worked hard, got the necessary education and applied for a position.

Peters graduated from Meadville Area Senior High School in 2002. He then graduated from Pennsylvania State University in State College with a bachelor of science in agricultural and biological engineering, specializing in power machinery and hydraulics. He earned a master of science in outreach engineering management from the University of Florida.

“It was a dream come true when I applied and received a job offer to work on the space shuttle in 2006,” Peters said. “And now, 16 years later, I am still in awe that I get to work on such amazing missions with such an amazing and diverse NASA team.”

Peters thanks his family and friends because he would not have received the Silver Snoopy without their love and support — past and present.

“I would especially like to thank my wife, my son, my mom and my dad because they have all had a tremendous impact on me and helped me get to where I am,” he said. “They are the reason I am who I am and do what I do. My sister and brother have been with me every step of the way, and I appreciate all they’ve done, too.”

So, what is his next project? Well, by now, we’ve all heard of Artemis, so the moon and Mars are not out of his reach.

“I’m currently part of NASA’s Artemis Program that will take us back to the moon and then to Mars,” Peters said. “I’m specifically part of the Exploration Ground Systems Program based at Kennedy Space Center in Florida that builds, tests, launches and recovers the SLS and Orion vehicles.

“We’re working to launch the Artemis I rocket, then we’ll prepare for the next mission, Artemis II.”