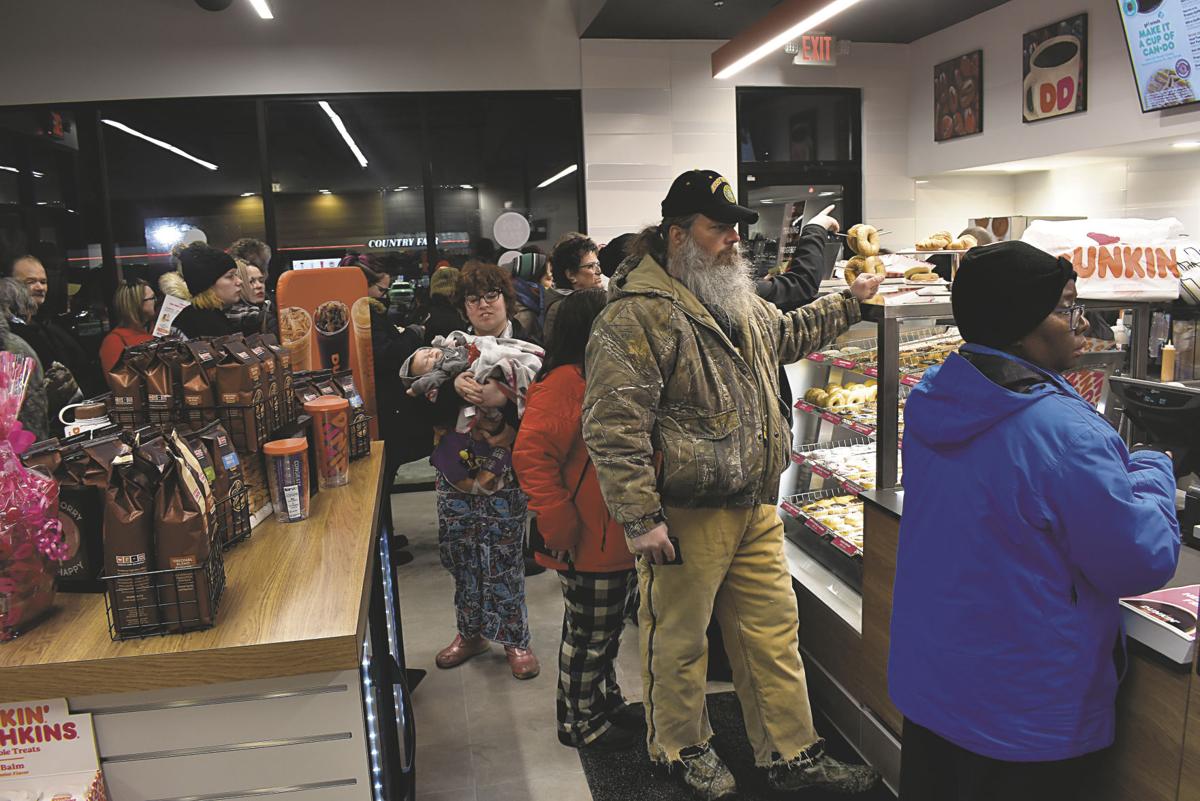 Finally inside, customers place their order, hoping to win the coveted prize of a year's worth of free coffee. The Meadville area location features an ordering kiosk and a coffee tap system with seasonal drinks. 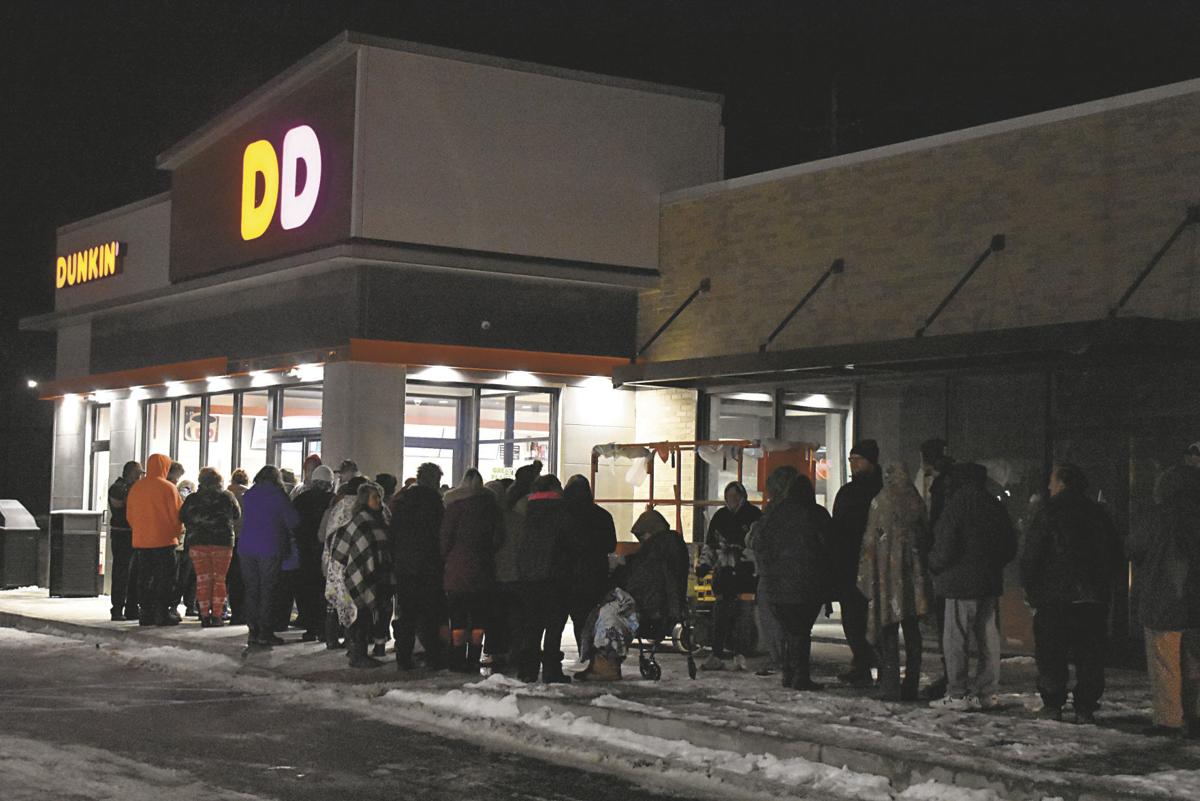 Coffee enthusiasts line up outside the new Meadville area Dunkin' for their chance at a year's worth of free coffee. The business held its grand opening on Wednesday, offering free travel cups and entry to the grand prize for the first 200 customers.

The new Meadville area Dunkin' is one in a chain of seven franchise locations owned by D.A.L.R.T. Inc., which is based out of New Castle.

VERNON TOWNSHIP — What would you do for the chance to win free coffee for a year? The answer for a large group of Meadville area people was get up exceptionally early and wait in a line while stuck in biting cold.

The Meadville area Dunkin', located at 18200 Conneaut Lake Road, held its grand opening Wednesday, with a special contest to celebrate the occasion. Dunkin' is the new name for Dunkin' Donuts, which dropped the second half of its title in 2019. The first 200 customers to buy something from the eatery were awarded a free travel cup.

One of the main draws was not the cups themselves but what was possibly inside them. Out of the 200 cups available, five contained a slip informing the recipient that they won free coffee for a year from Dunkin'. The winners would receive a packet full of a little more than 365 coupons, each one good for a free large or iced coffee. This equates to $981.85 worth of money saved.

Despite the relatively small odds of claiming the prize — with each of the first 200 customers having only a 2.5 percent chance of being one of the lucky winners — this metaphorical golden ticket proved very popular with many coffee enthusiasts. By around 5:30 a.m., with still a half hour to go before the business opened, a line of people had formed, a procession which wrapped around two sides of the building. In addition, the drive-through window had a line of its own which reached down to the street in front of the new Dunkin'.

Cyndi Walton of Cochranton was among the very first people in line for the chance to win. She, along with six other people who accompanied her, arrived at 2 a.m., determined to win that prize.

"There's six of us, so I'm hoping one of us wins," Walton said a few minutes before the doors were opened to customers.

As luck would have it, those extra hours of waiting would pay off. Donna Smith, Walton's sister-in-law who went with her for the grand opening, was the first person to win one of the coffee prizes. Smith was the very first order of the business's official grand opening, ordering two dozen doughnuts and a coffee.

Addie Lipps of Conneaut Lake was another winner of the free coffee prize. Lipps was the first person to utilize a kiosk that allows customers to make orders with a touch screen at the new location, a relatively new concept for the Dunkin' chain. Lipps said with a laugh that she was "forced" to go to the opening by a friend and co-worker, Ariel Smith. Despite the hour and 15 minute wait she had to endure before placing her winning order, she enjoyed the experience.

"It's totally worth it," Lipps said.

D.A.L.R.T. is a family-run business, with Miller's husband, Don, serving as president. Their three daughters, Taylor Walters, Randi Griffith and Leeanne Miller, all serve in various capacities for the company. The name D.A.L.R.T. is an acronym, with each letter standing for each family member's first name.

The D.A.L.R.T. chain of Dunkin' began in New Castle 40 years ago, where the company currently operates three storefronts. Another location is in Grove City, while two others are in Erie.

The Meadville area location was born out of franchise agreement requirements, which necessitated the opening of a certain number of locations, Annette said. After searching for an ideal spot, the area located along Pennsylvania Avenue seemed ideal.

The family was actually caught by surprise at the number of people who came for the grand opening.

"We didn't anticipate this turnout because of the cold," Annette said, further saying the family was "very pleased" with the crowd it saw.

The event even saw the involvement of someone from the main corporate office of Dunkin', one who also has ties to the area.

Jeremy Vitaro, vice president for U.S. Development for Dunkin', was raised in Meadville, having graduated from Meadville Area Senior High in 1988. Vitaro was on hand to assist with the grand opening.

Vitaro said he began working for Dunkin' in 2003 after earning his master's degree in business from Columbia University in New York City.

Being able to bring a Dunkin' to his hometown was a positive moment for Vitaro.

"Wonderful," he said when asked how it felt. "It's very exciting."

Having attended many grand openings, Vitaro said the crowd outside the Meadville area location was on the higher end of turnout for such an occasion. He said he really enjoyed seeing the enthusiasm from the people in line.

"It tells you how excited people are for the brand," he said.

Griffith, who is the director of marketing and guest relations for D.A.L.R.T., said the new location will have many features not seen in the other Dunkin's owned by the franchise. For example, it features a tap system which is used to make exclusive beverages.

The eatery also has a single beverage line, something which Griffith said is "more efficient," as well as the ordering kiosk.

The tap system will also be used to cycle out seasonal drinks, bringing new flavors to the Dunkin' from time to time. This February, the Dunkin' will have pink velvet on tap, a flavor none of the other D.A.L.R.T. locations have ever gotten to use, according to Griffith.