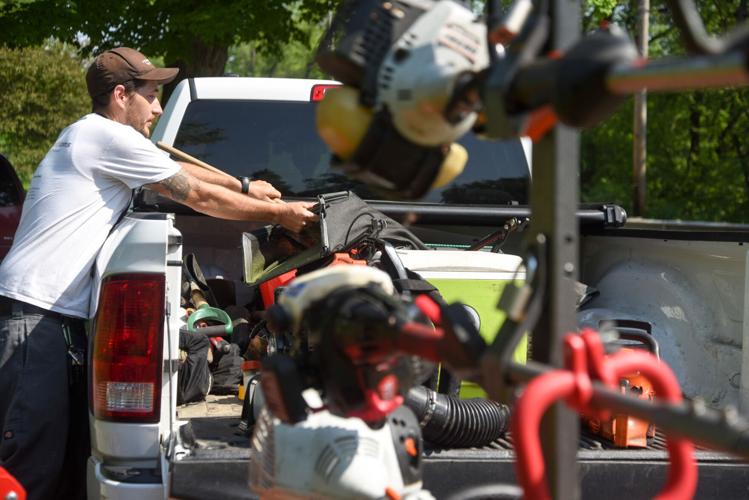 Drew King, owner of D K Home Solutions in Meadville, loads his truck before leaving for a recent landscaping job. 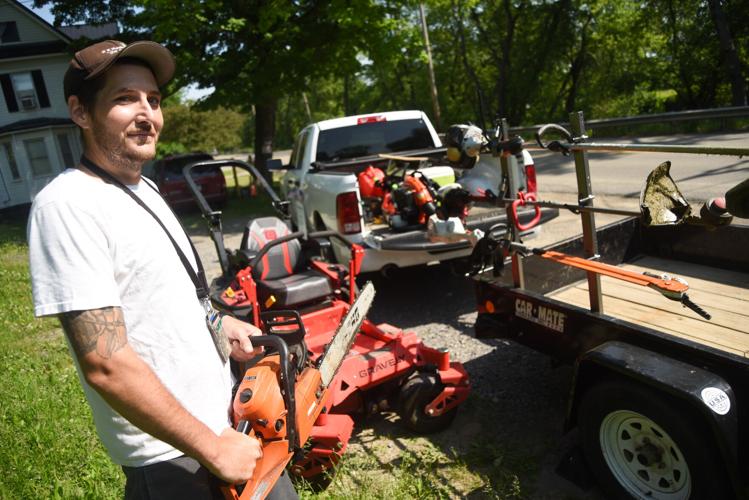 Drew King, owner of D K Home Solutions in Meadville, is seen with his many gas-powered tools, including the company truck, needed to complete a landscaping job.

Drew King, owner of D K Home Solutions in Meadville, loads his truck before leaving for a recent landscaping job.

Drew King, owner of D K Home Solutions in Meadville, is seen with his many gas-powered tools, including the company truck, needed to complete a landscaping job.

It’s not a secret that the high cost of gas is being keenly felt by many people, but perhaps one of the most affected businesses are landscapers.

Have you adjusted your use of gasoline with prices continuing to rise?

On top of transportation costs, landscapers deal with a multitude of gas-powered tools, ranging from lawnmowers and weed trimmers to chainsaws and leaf blowers. That means a lot of fuel tanks that need to stay filled, and a lot more cost at the pump.

“They’ve driven down our profits by a large amount,” said Drew King, owner of D K Home Solutions in Meadville, of the gas prices “because we’re having a hard time charging customers more per lawn because they don’t want to pay more per lawn, and we’re using the same amount of gas.”

King said his profits were down 30 percent last month, and while he has so far resisted the temptation to raise his prices, he feels that prospect is not far off. In his estimation, he went from spending around $800 a month on fuel to close to $1,200 a month.

“We’ve taken the lower profit right now, but we’re going to have to adjust our price model because we can’t continue to take a loss,” he said.

The increased cost in fuel has played a major change in how King does business. Previously, he could operate anywhere in a 50-mile radius, but with longer distances being more costly, he said that isn’t feasible anymore.

Keeping travel time down is something Blooming Valley Landscape & Supply has been looking to do in the face of the high gas prices, according to the company’s maintenance manager, Josh Stump.

“It’s definitely been a struggle, but we’ve been really working on tightening up routes we run so we’re not bouncing from one side of the city to the other,” Stump said.

Blooming Valley Landscape used 21,000 gallons of fuel in the month of May, Stump said, between unleaded, ethanol-free unleaded and diesel fuel, to power all of the forms of equipment the company uses.

While electric landscaping tools exist, Stump said they are often only usable during short periods of time, and don’t have the battery capacity to meet the hours demanded of landscaping work.

“With the amount that we do in a day, yeah, we’d struggle to keep that battery charged all day long,” he said.

The company has had to adjust its prices to keep up with the raised cost of fuel, even as Blooming Valley Landscape looks to lower the amount of fuel it uses.

“We are really, really trying to not pass costs along, but at the end of the day, at some point, the bill comes due and we don’t want to go under either,” he said.

Greg Brown, owner of A Cut Above Property Services, has also been feeling the struggle to not charge more while also facing increased expenses.

“It makes you flinch more because you’ve got to put that number in there,” Brown said. “You have to account for your drive time more than you used to.”

Brown estimated he’s paying double in fuel prices than what he used to, most of that coming out of transportation costs than anything else.

“My work truck gets 10 miles to the gallon, and that’s when it’s empty and I’m driving down the interstate.”

The rise in cost has had Brown taking a closer look at his profit margins and operational costs for gas.

On top of the fuel costs being passed down to the landscaping companies, Brown is also concerned about how the increased prices might lower the number of available customers. With the average person also paying more for gas, affording to hire a landscaping service might just not be feasible for some.

“They’re hurting this year,” he said. “They’re not going to be able to afford to have a new layer of mulch put down.”