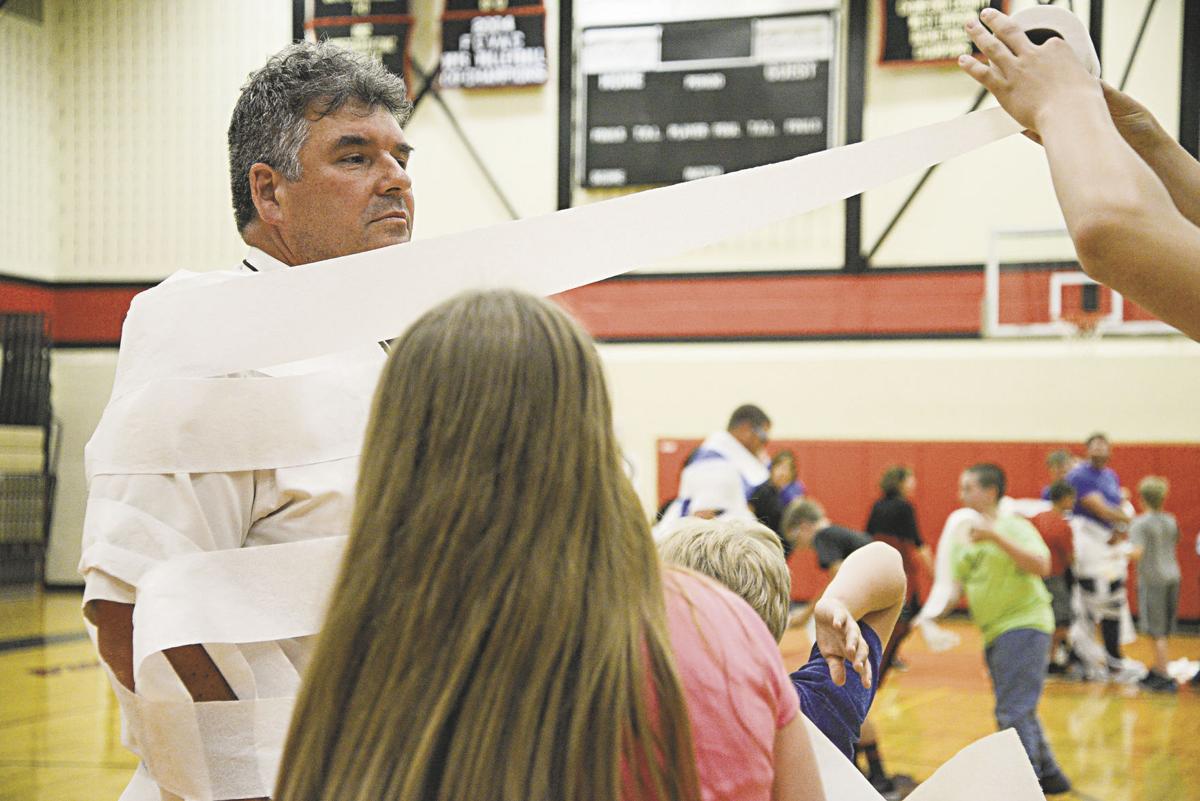 Kevin Burns, Conneaut Valley Middle School principal, watches as students wrap him in toilet paper during one of the games at the SOAR assembly at the school. 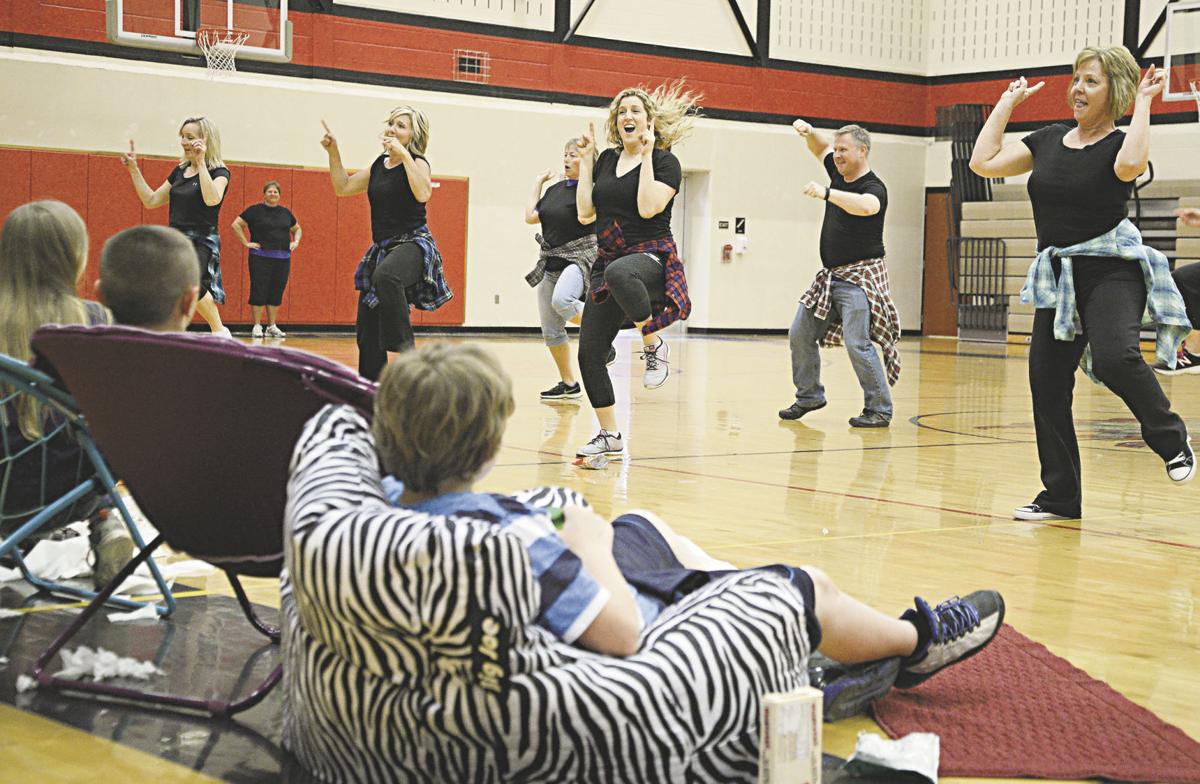 Conneaut Valley Middle School teachers and faculty members perform a dance routine for the graduating eighth graders during the SOAR games assembly in the school gymnasium. 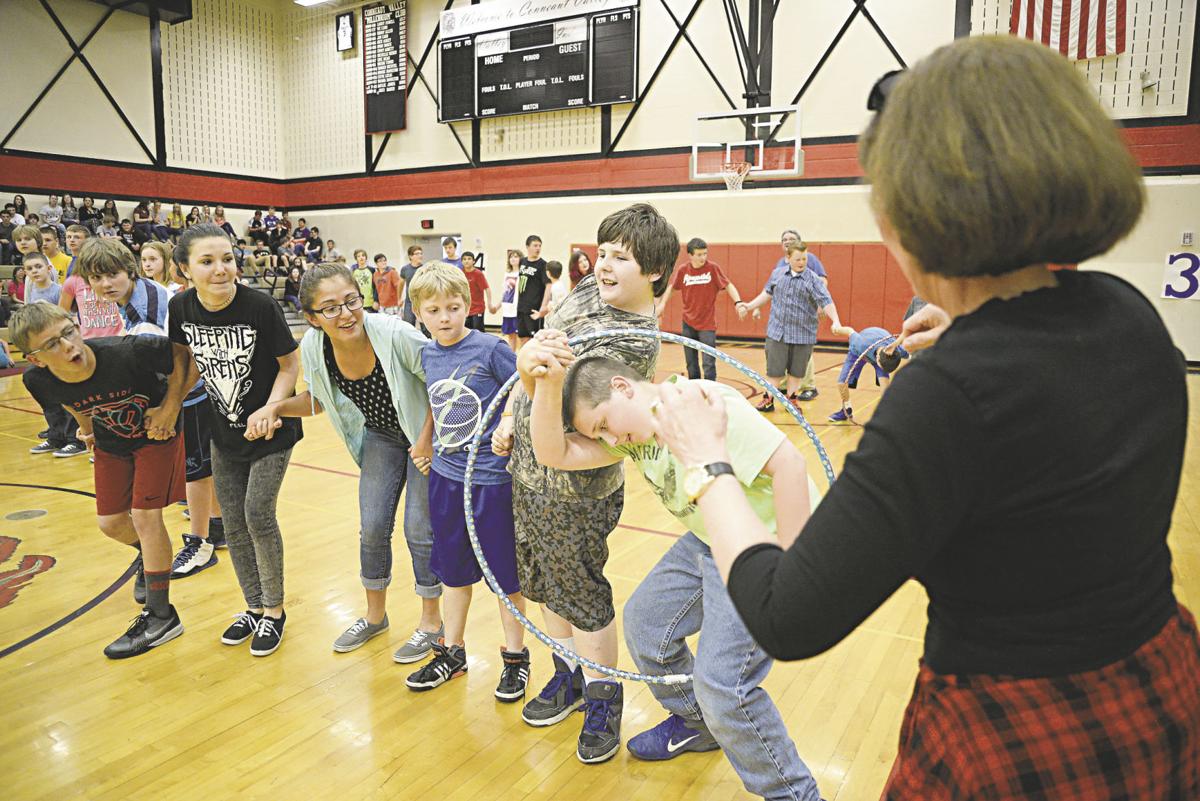 A group of Conneaut Valley Middle School students participate in hula hoop chain during the recent SOAR games assembly in the school gymnasium. The students had to work together to move the hula hoop from one end of the line to the other while holding hands.

Kevin Burns, Conneaut Valley Middle School principal, watches as students wrap him in toilet paper during one of the games at the SOAR assembly at the school.

Conneaut Valley Middle School teachers and faculty members perform a dance routine for the graduating eighth graders during the SOAR games assembly in the school gymnasium.

A group of Conneaut Valley Middle School students participate in hula hoop chain during the recent SOAR games assembly in the school gymnasium. The students had to work together to move the hula hoop from one end of the line to the other while holding hands.

In an atmosphere that feels like part rock concert, part NBA playoff game, U.S. history and geography teacher Kris Barnes addresses nearly 300 students in the bleachers of the Conneaut Valley Middle School gymnasium through the headset microphone he wears.

The students’ positive energy is evident. They are excited about not only the approaching end of the school year but about the purpose of this assembly. They are here so their everyday accomplishments over the past nine weeks can be celebrated.

“It’s time to get the SOAR games rolling,” Barnes announced.

Within moments many of them will have toilet paper streamers draped over them, launched there by Barnes’ colleagues — a group of teachers wielding leaf blowers with rolls of toilet paper affixed to the ends. Others will be on the gym floor, hands linked with a chain of 20 other students, passing a hula hoop down the chain without unlinking their hands. Still others later work as teams in a race to wrap their principal and other staff members in toilet paper.

This is not your grandfather’s school assembly.

And while this is also not the atmosphere Barnes and several colleagues encountered in early May when their efforts were recognized by the Pennsylvania Positive Behavior Support Network, the enthusiastic reaction from the students is very much part of the reason why the team was recognized. Conneaut Valley’s SOAR team was among 213 teams from across the state honored as part of the state Department of Education’s effort to foster school-wide positive behavior programs.

“There was a really good dynamic down there because you get to share ideas with other schools,” Picerno said. “We got to see ideas we could use and share our ideas.”

As Barnes explains, SOAR, Conneaut Valley’s positive behavior program, attempts to reward students for what they do correctly as a way of cutting down on negative behavior as well as the forms of discipline that go along with it. SOAR stands for Stay safe, Organize ourselves, Accept responsibility and Respect others. It was inspired by the school’s mascot, the eagle. 2015-16 was the the SOAR program’s second year at Conneaut Valley.

“We wanted to be able to point out everyday students doing the right thing,” Barnes said. “We still have traditional consequences for negative behavior, but we try to proactively show them the behavior we want to encourage.”

With input from other teachers and administrators and students as well, the members of the SOAR team, Barnes said, “try to look at where kids are having problems and talk about how we can try to reverse it.”

“They definitely listen to your opinion,” eighth-grader Antigone Kellogg said.

Kellogg, along with eighth-grader Kiersten Roncaglione and sixth-grader Julia Bartosek, stepped away for a minute from the hectic activity of the assembly to discuss the SOAR program. All three appreciated the chance to offer input and had good things to say about the program as a whole.

“It’s a great way to improve our behavior in school,” Kellogg said. “It’s definitely decreased disciplinary referrals,” she continued, referring to the disciplinary referrals that students receive for behavioral infractions. Minor infractions include such things as not turning in homework or being late for class. Major infractions include incidents such as fighting. The SOAR program has introduced similar tickets for periodic recognition of positive behavior as well.

Not only has the program helped with discipline, said Bartosek, “It’s a lot of fun to be in.”

“It’s very creative,” Roncaglione said. “Some kids would think, ‘I’m too cool for this, I wouldn’t want to be a part of this,’ but the teachers find very creative ways to get the students involved and make them think it’s worth being in.”

Before long, Kellogg and Roncaglione re-joined their classmates in the bleachers. Bartosek, however, returned to her cushy chair in the “VIP” section, a row of plush bean-bag and saucer-style chairs arranged in front of the bleachers. At the beginning of each of the four SOAR games assemblies throughout the year, names are drawn to see who will watch the events from these chairs while relaxing with free soda and snacks available only to the VIPs. Students place the tickets they receive for positive behavior into the drawing. Drawings continue throughout the assembly as more participants are needed for what Barnes refers to as the “campy fun” that takes place.

The fun may be campy and the methods may seem a bit offbeat, but the numbers suggest they are effective. As Barnes reveals to the students at the assembly, disciplinary referrals for fighting are down from 17 in 2015-16 to six this year. Last year there were 80 referrals for disrespect, this year only 28. Perhaps most impressive of all, after a total of 2,700 total referrals in 2015-16, the vast majority for minor infractions, in 2016-17 there have been 1,700, a reduction of 37 percent.

“The data shows the improvement,” Principal Kevin Burns said. “Anybody can discipline, but we need to focus on reteaching.”

The key, he says, has been how everyone, including students, has bought into the program. “Absolutely,” he said.

“To have that large of a reduction is pretty remarkable,” said art teacher Jim Kullen, who joined the SOAR team in January. “And that guy talking,” said Kullen, referring to Barnes, “is a big part of it.” A few minutes later, Kullen quietly slipped from the gym to prepare for his role in the assembly’s finale.

When he emerges later, his body is encased in an enormous inflatable device used for bubble soccer. His head over heels entrance is part of the SOAR team’s surprise for their students, a tribute to the graduating eighth graders involving a medley of pop songs and a series of elaborately choreographed dances.

As the spectacle concludes, teachers and staff members form two rows through which the departing eighth graders make their way and it’s clear that the students are not the only ones demonstrating positive behavior at Conneaut Valley these days.