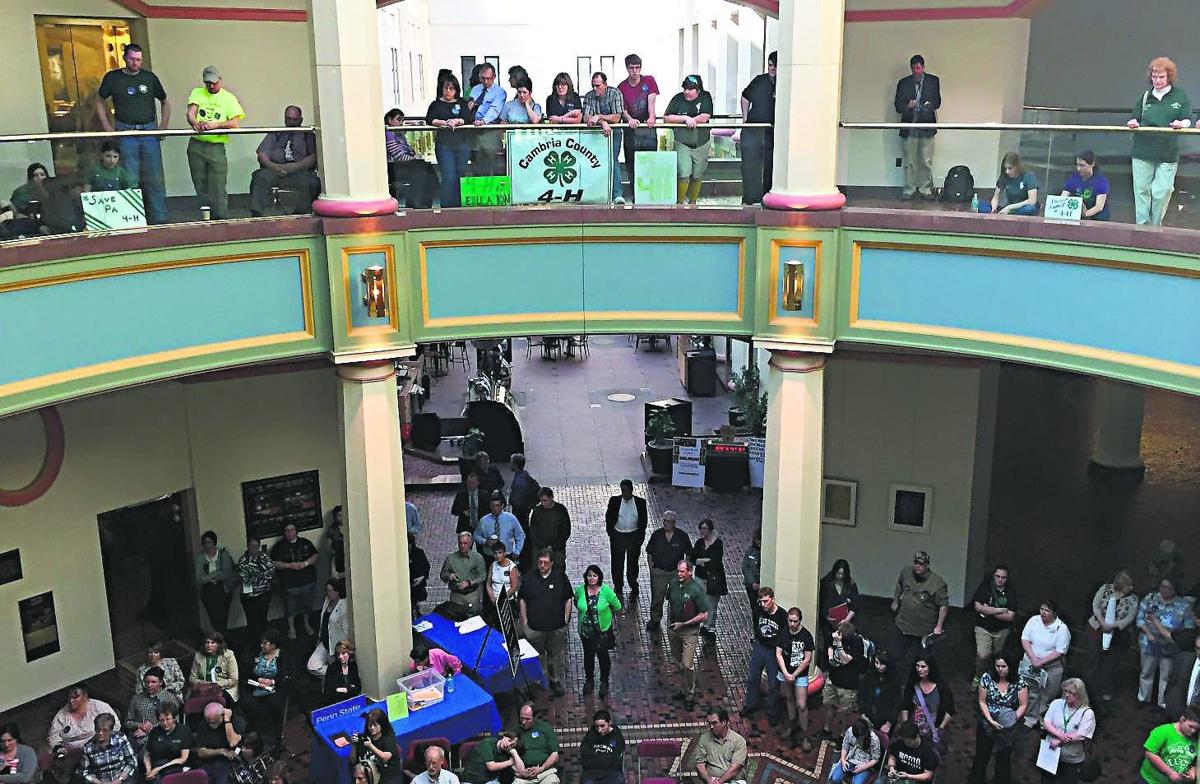 Supporters of the Penn State Cooperative Extension Service and the 4-H clubs operated by the extension watch a broadcast in the Capitol east rotunda of a legislative hearing on agriculture funding. The sprawling network that puts agricultural research in the hands of Pennsylvania farmers is in danger of closing, as are the state's 4-H clubs, becoming the latest casualties of a protracted budget standoff. 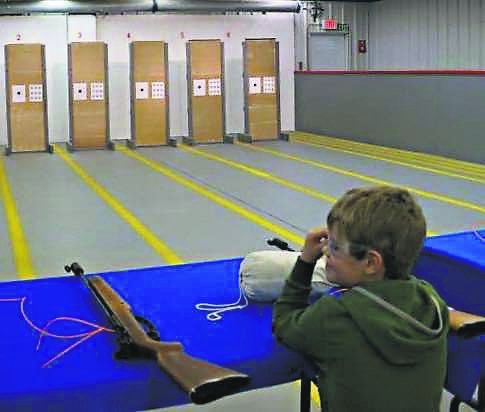 Nine-year-old Gabriel Jordan waits for the signal of all clear to check his target after shooting his air rifle during practice with the Hemlock Adventures 4-H Club at the Bullseye 205 American Legion Shooting Range in Saegertown. The network that puts agricultural research in the hands of Pennsylvania farmers is in danger of closing, as are the state's 4-H clubs, becoming the latest casualties of a protracted budget standoff.

Supporters of the Penn State Cooperative Extension Service and the 4-H clubs operated by the extension watch a broadcast in the Capitol east rotunda of a legislative hearing on agriculture funding. The sprawling network that puts agricultural research in the hands of Pennsylvania farmers is in danger of closing, as are the state's 4-H clubs, becoming the latest casualties of a protracted budget standoff.

Nine-year-old Gabriel Jordan waits for the signal of all clear to check his target after shooting his air rifle during practice with the Hemlock Adventures 4-H Club at the Bullseye 205 American Legion Shooting Range in Saegertown. The network that puts agricultural research in the hands of Pennsylvania farmers is in danger of closing, as are the state's 4-H clubs, becoming the latest casualties of a protracted budget standoff.

HARRISBURG — A sprawling network that puts agricultural research in the hands of Pennsylvania farmers is in danger of closing, as are the state's 4-H clubs, becoming the latest casualties of a protracted budget standoff.

Penn State warns that unless $50.5 million is restored in its budget for agricultural programs, it will hand pink-slips to 1,100 employees on May 1.

Those include 736 positions at 67 extension offices across the state, all of which would close. The university would close three research stations — in Adams, Lancaster and Erie counties — at the cost of 20 staff jobs. Close to 350 faculty, administration and staff jobs would be cut at Penn State’s main campus in State College.

Also at risk is $80 million in federal money that supports agricultural research at the university, said Richard Roush, dean of the College of Agricultural Sciences.

The $50.5 million was eliminated in a line-item veto by Gov. Tom Wolf back in December.

Rep. Martin Causer, R-Potter County, chairman of the House Agriculture Committee, said he will introduce legislation to reinstate the money when the Legislature returns to session next week.

But Jeff Sheridan, a spokesman for Wolf, said the governor would prefer that Republicans negotiate a full budget rather than pass piecemeal spending bills.

“The governor used his line-item veto power to ensure the budget was balanced and because Republican leaders did not provide revenue to pay for their budget,” he said.

Wolf has been in an eight-month standoff with the Republican-controlled Legislature over his efforts to get a sales or income tax income increase to pay for increased spending, primarily for schools. In December, the governor released most of the money for the 2015-16 budget, but withheld the agriculture dollars, along with money for prisons and the second six months of funding for schools.

Wednesday afternoon, Wolf met with a group of 4-H students, his office said in a statement. The governor told the students that if the Legislature passes his proposed 2016-17 budget proposal, it will more than replace the amount he rejected with his line-item veto. The governor's plan would provide just under $51 million for the extension offices and other agricultural research.

Penn State estimates that more than 92,000 children and adults participate in 4-H activities run through the cooperative extension.

Another 9,500 volunteers participate in Pennsylvania clubs and activities for the national youth development program whose "H's" stand for head, heart, hands and health. In 2015 there were 515 4-H members in 41 4-H clubs in Crawford County, according to Paula Lucas, 4-H educator at the Crawford County Penn State Extension.

The threat to Pennsylvania's 4-H brought hundreds of protesters to Harrisburg on Tuesday.

Katherine Dickinson, of Enon Valley, near the Ohio border in Lawrence County, was on a bus of 50 people that departed at 6:30 a.m. to arrive at the Capitol before noon.

Asked if she was worried or angry about the budget impasse, Dickinson said, “Mostly worried. It’s too good of a program to lose. The kids learn so much.”

Dickinson has been involved with 4-H activities for 45 years, she said, volunteering with sewing, cooking and craft clubs. She said five generations of her family have been involved in 4-H.

Close to 40 people came by bus in a group representing people from Cambria, Somerset, Bedford and Blair counties.

Among them were high school students including Marissa Matlin, a junior at Forest Hills High School, and Amanda Venesky, a sophomore at Cambria Heights High School.

Venesky said she thinks club members are being used as "leverage" by the Wolf as he tries to get the Legislature to fund his priorities.

"We're like a big family," Matlin said. "We want agriculture to survive, and we can't do that without Penn State."

Without the help of the extension service, it would be much more difficult to farmers to compete and stay profitable, Matlin said.

Venesky has been active in community 4-H clubs, doing projects in shooting sports, cooking and fitness, among others. Matlin has done livestock projects, including raising steer. She has also participated in shooting sports programs.

The teenagers were adamant that the clubs have been very important in helping them become better leaders and make new friends.

The 4-H clubs are just part of what could be lost.

Also at risk is the network of Penn State researchers who provide technical expertise to farmers and guidance in dealing with threats posed by unfamiliar disease and pests.

Penn State is a land-grant university, part of a group of research colleges that received federal funding starting in the 1860s to do practical research on agriculture, science and engineering.

In 1914, land-grant partnerships were expanded to create networks of extension agents to share their work with the public.

The $50.5 million vetoed by Wolf is the state’s contribution toward that partnership.

States in the Northeast have been more likely to pare back spending on extension networks than states elsewhere, said Paul Craig, of Halifax, a retired Penn State extension agent and past president of the National Association of County Agricultural Agents.

But the extension network has real-world benefits, even as technology makes it easier for farmers to get information about best practices from the Internet. Extension agents connect farmers with reliable sources and are more attuned to local conditions, he said.

Diminishing the university’s research role will create a void likely to be filled by companies whose research helps them sell products to farmers, he said.

Every state has an extension service. Some have been forced to deal with reduced government contributions, and some have considered cutting funding for 4-H.

But nowhere else has the extension service and 4-H been threatened with this type of wholesale dismantling, Roush said.

Penn State has shifted about $30 million from other funds to pay bills for the cooperative extension network, 4-H clubs and agricultural research since the end of the 2014-15 fiscal year, Roush said. But it cannot continue to continue to cover those costs over the longterm.

Penn State has a $4.9 billion operating budget and a $3.6 billion endowment, according to university data. Tuition money cannot be used for the extension service, and almost all endowment dollars are restricted by donors for specific purposes, Roush said.

Shutting down the network, even briefly, could have disastrous consequences, he said.

Agricultural researchers employed by Penn State are experts in their fields, who will leave for other jobs at universities elsewhere if given layoff notices. Once they start to depart, he said, they won't be easy to replace.

“People (around the country) are watching to see what happens,” he said at a Tuesday event at a fruit research station in Adams County. “We are at a landmark moment in the history of the land-grant partnership.”

John Finnerty reports from the CNHI Harrisburg Bureau for The Meadville Tribune and other Pennsylvania newspapers owned by Community Newspaper Holdings Inc. Email him at jfinnerty@cnhi.com and follow him on Twitter @cnhipa.

What does the Extension Service do?

Here are some of the many ways Penn State Extension can help individuals, families, businesses and communities, according to its website.

• Developing the potential of youth through 4-H

• Improving the lives of the elderly

• Caring for children and seniors

Here's how you may contact Gov. Tom Wolf and Crawford County's state legislators:

COLUMN: What Pennsylvania's land grant university does for farm families is invaluable

I can hear my father's words quite plainly today.