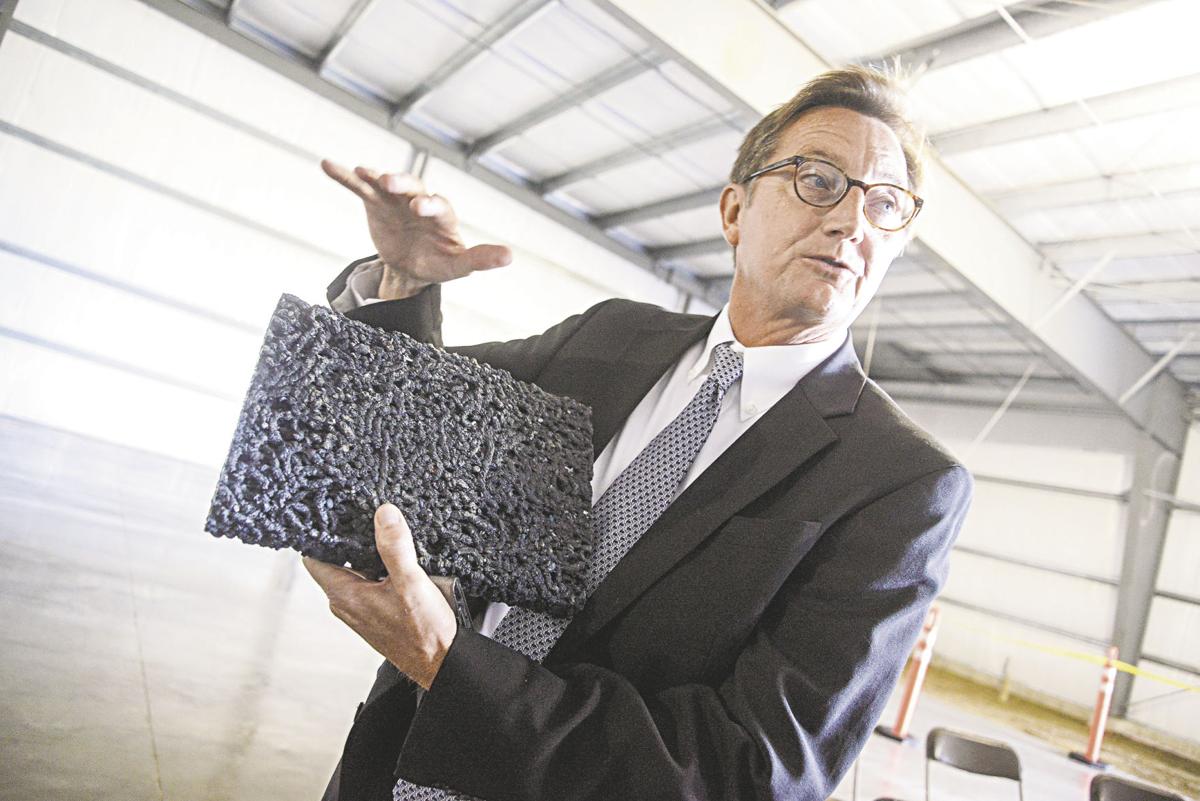 Ed Grieser, CEO and founder of HydroBlox, explains how the company's process works. 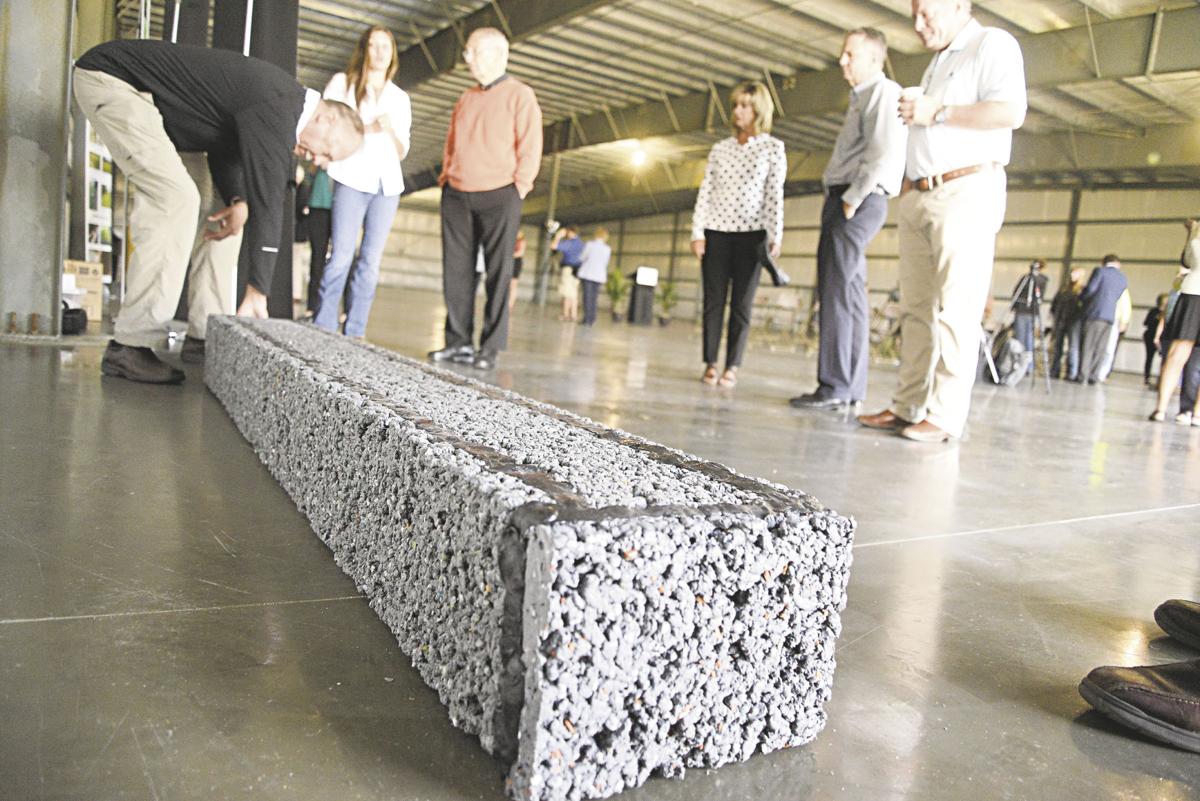 Members of the Economic Progress Alliance of Crawford County and interested parties gather to get a look at a long HydroBlox brick during a recent announcement stating the company is expanding to the Keystone Regional Industrial Park in Greenwood Township.

GREENWOOD TOWNSHIP — A Crawford County company that recycles waste plastic into drainage blocks is set to become the initial tenant at the Keystone Regional Industrial Park in Greenwood Township.

HydroBlox Technologies Inc. of Conneaut Lake is expanding its manufacturing operations by buying what was initially to be a 20,000-square-foot prospect building constructed by the Economic Progress Alliance of Crawford County at the industrial park.

The announcement of HydroBlox buying the building was made Friday by the Economic Progress Alliance and HydroBlox officials at the nearly finished $1.3 million building. It's located off Adamsville Road and is anticipated to be the first of several buildings built by the alliance.

"It's a very, very exciting time for the (Economic) Progress Alliance," Jim Becker, the alliance's executive director, told the crowd of having HydroBlox on board as the first tenant.

HydroBlox has proprietary equipment that recycles plastics of all types by grinding it and then converting the ground plastic into drainage blocks and boards.

"We make the world's ugliest, least sexy product," said Ed Grieser, the company's chief executive officer, holding up one of the blocks. "On the other hand we do have the distinction of saying we have a product that is very unique."

HydroBlox's products are used around the world as drainage systems — including under athletic fields for school and professional teams; as drainage for building foundations; stabilizing hillsides for underground pipelines; and as a base for rooftop gardens.

"This conveys water because there's void space inside," Grieser said of the blocks. "The water is moving through a path of least resistance all through the board."

The blocks have small open spaces — like an English muffin or block of ramen noodles.

The boards merely have to be installed jointly in a line, relying on the water's head pressure, not gravity, to move it along, Grieser said.

"You can have it (the block system) just about dead level, it pushes water away to where it's drier," he said. "The water dissipates out as it hits drier ground."

The firm's proprietary manufacturing process is clean with no glue or binders used to hold the ground plastic together and there's no leaching of the plastic, he said.

"If it's waste, we regrind it and run through the machines again," Grieser said.

HydroBlox products are being boosted by the Pennsylvania Department of Environmental Protection and the Pennsylvania Recycling Markets Center, which helps companies interested in using recycled materials to produce new products.

HydroBlox expects to begin manufacturing at the new site before the end of the year, Grieser said. It will be the firm's second location in Crawford County — a much larger site with a significant increase in employment, too.

"We still don't have inventory (on hand) because everything we make is sold before it's produced," Grieser said.

For the past six years, HydroBlox has used a 9,000-square-foot building off Gehrton Road in Summit Township near Conneaut Lake with seven employees manufacturing the blocks.

The business has been growing as more and more companies — particularly consumer product firms — become concerned about plastics in their manufacturing as well as used plastic entering the waste stream, he said.

"We'll be operational (at the new site) in a few months, but we won't stop there for good reason," Grieser said. "We've been approached by top tier manufacturing and consumer product companies about their waste plastics."

Grieser said the 20,000-square-foot factory is expected to employ about 33 workers who will be spread out over three shifts of 11 each around the clock.

The Economic Progress Alliance had the building designed and constructed to be expandable to add up to 38,000 square feet as the company grows, Becker said.

HydroBlox also is planning another factory site in Florida as well as developing mobile equipment on trucks, a factory on wheels, to do recycling onsite at a company, Grieser said.

"This winter we'll be on full bore up here," Grieser said. "This is our base of operations and this is where everything is going to be happening."

Becker and other officials were just as excited as Grieser in having HydroBlox buying the building to jumpstart the industrial park.

"It's been a long time coming," a beaming Becker said.

The building initially was set to be a speculative building of around 20,000 square feet that could be divided into two 10,000-square-foot sections, Becker said.

HydroBlox approached the alliance about the availability of the building during its construction so the focus shifted to building it to suit the firm, Becker said.

Becker praised the efforts of local and state officials, both elected and non-elected, in moving the project forward.

"We were very, very fortunate all three taxing bodies (Crawford County, Greenwood Township and Conneaut School District) supported us," Becker said in agreeing to extend the KOZ designation. "In 2017, if the KOZ expired, it would have been far more difficult to market and to try to build out."

Becker also praised the Economic Progress Alliance's volunteer board for its long-range thinking and full support in backing the idea of putting up a speculative building. ERIEBANK and the Pennsylvania Industrial Development Authority also provided a mix of private and public financing for the building, he said.

"We were committed to come out and build a spec building with the opportunity to put a facility out here on the site and take the risk, take the gamble and try to move this forward," Becker said in thanking the broad-based support for the efforts. "It's turned out exactly the way we had hoped."

Bill Bragg, chairman of the Economic Progress Alliance, had praise for Becker's vision and efforts.

"Jim has been the driving force behind this project," Bragg said.

And future plans call for a repeat of the effort.

Once the sale of the building closes in the coming weeks, Becker and the alliance will start another similar building project.

There are four adjacent sites of four to five acres each that will be subdivided with another spec building of around 20,000 square feet to be built on one of them, Becker said.

Edgerton, Ohio - Margaret A. Olson, age 73, of Edgerton, passed away Wednesday evening, February 12, 2020 at Park View Nursing Center in Edgerton. Margaret was a homemaker who enjoyed making and selling crafts. Margaret was born on February 5, 1947 in Franklin, Pennsylvania, the daughter of …