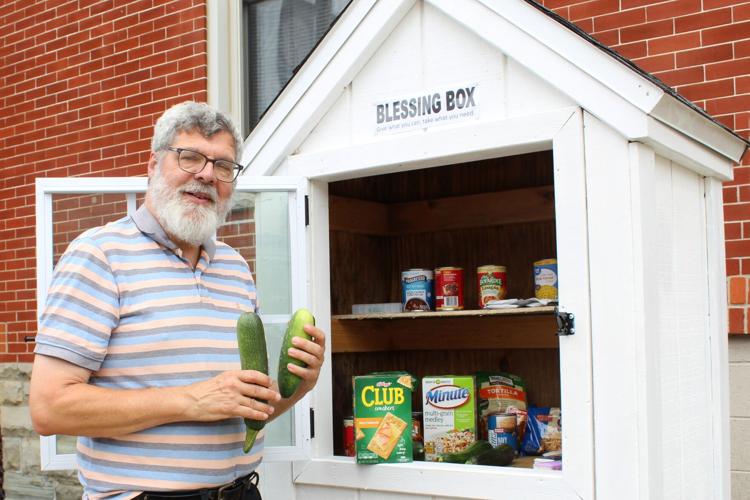 Cambridge Springs Mayor Randy Gorske shows the new Blessing Box that was recently installed on South Main Street in the borough. People may help themselves to food or other items and may also donate items. 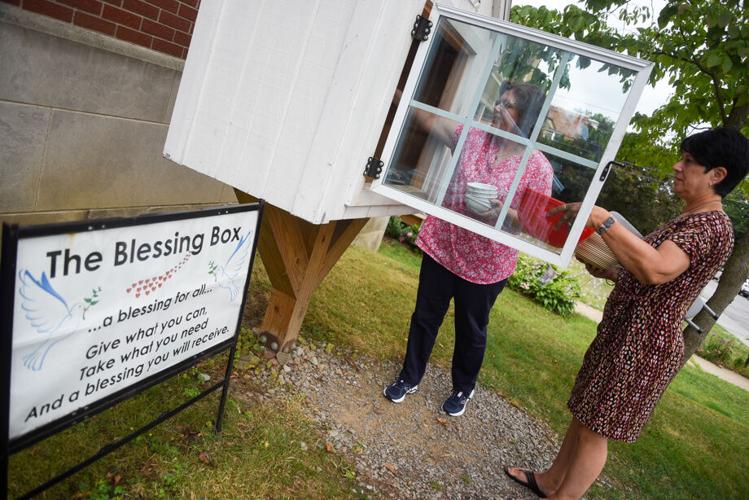 Norma Durfee and Patty Mears check out the Blessing Box in front of the Family and Community Christian Association at 378 Chestnut St.

Cambridge Springs Mayor Randy Gorske shows the new Blessing Box that was recently installed on South Main Street in the borough. People may help themselves to food or other items and may also donate items.

Norma Durfee and Patty Mears check out the Blessing Box in front of the Family and Community Christian Association at 378 Chestnut St.

That’s the message on a Blessing Box that was installed in Cambridge Springs Borough on July 23.

The Blessing Box, located near Bartlett Gardens, a senior living center on South Main Street, is filled with items — mostly food — that people might need. Although it is located near the senior center, it is for the entire community to use.

“If people need something in between the monthly food pantry distribution, they can just help themselves,” Cambridge Springs Mayor Randy Gorske said.

The Blessing Box in Cambridge Springs is one of three boxes that was made possible through grant funds.

The CHCF is nonprofit organization dedicated to improving the quality of life in Crawford County. It helps people make the most of their philanthropy by giving to endowed funds. Grants are awarded from those funds to support the causes donors care about as well as worthwhile programs the foundation selects.

The FCCA is a nonprofit organization that provides services to the community to help those most in need. The agency provides educational services and is home to Pre-K Counts and Early Learning Resource Center.

A second box is located in front of the FCCA building at 378 Chestnut St. The location of where the third box will be installed has not been determined.

The late Regina Merritt, former executive director of the FCCA, chose the design for the boxes. The box in Cambridge Springs is 3 feet wide and 5 feet tall from the base to the peak of its roof.

The FCCA contracted with Dave Durfee Jr., an engineer, to have him build the boxes. The grant paid for the materials, and Durfee donated his time and labor.

Durfee and Gorske put in a concrete foundation for the box in Cambridge Springs. Durfee and his wife, Norma, installed the box on the foundation on July 23 and were the first donors. Norma is the office manager for Pre-K Counts at the FCCA.

Gorske said Cheryl Tapper, manager of Bartlett Gardens, got approval from the corporation that owns the facility to have it installed on the property.

The box is basically for nonperishable items, such as canned goods, boxed dinners, paper products and personal hygiene items.

“With the harvest, people can place fresh produce in the box, but we’d like them to post it on the borough’s Facebook page so people know to access it as soon as possible,” said Gorske, who will check fresh produce placed in the box.

The Blessing Box in front of the FCCA is larger than the one in Cambridge Springs, and some nonfood items have been placed there. Patty Mears of the Early Learning Resource Center helped set up the Blessing Box.

Other items have also been placed there for the community.

“We put umbrellas, toys and some toiletries in there,” Norma said. “It’s for any items that somebody could use.”

The box is popular with the community.

“Every day there are people in and out,” she said. “It’s the biggest one of the three.”

She only asks that people do not leave trash, such as food wrappers, in the box.

Norma said when she and her husband brought the Blessing Box to Cambridge Springs, they had help from Stephanie Farrington, a server at the Villa Restaurant and Lounge, and also from Marcus McGee, Alan Glenn, Jeremy Price and Ron Harrison.

“They were very helpful,” she said.

Gorske hopes the Cambridge community takes advantage of the Blessing Box like they do in Meadville.

“It’s another great community asset for our local citizens to be able to utilize,” he said.

With tolls continuing to rise on the Pennsylvania Turnpike, will you seek alternate routes to avoid higher prices?