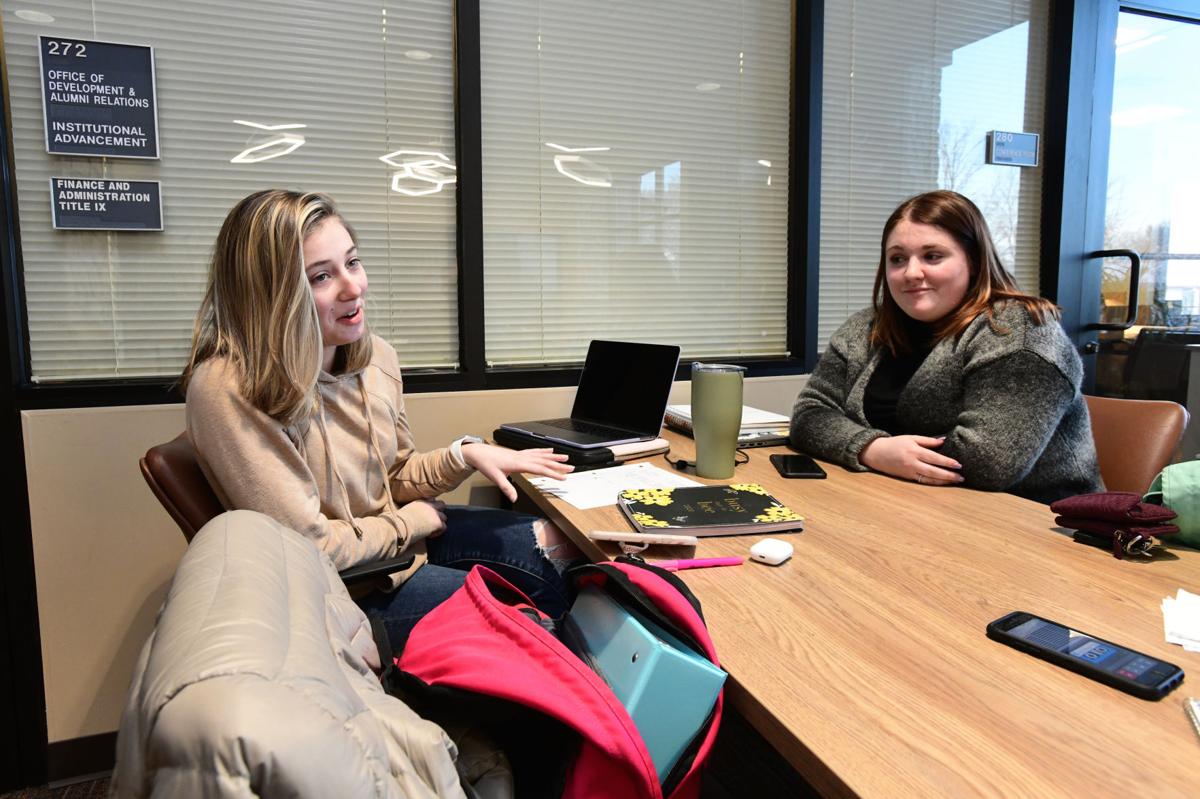 Respiratory therapist majors Nicole Himes of Blairsville, left, and Lachel Clark of Everett, are interviewed while studying on Jan. 7, 2020, in Biddle Hall on the University of Pittsburgh at Johnstown campus. Himes is a junior and Clark a senior. 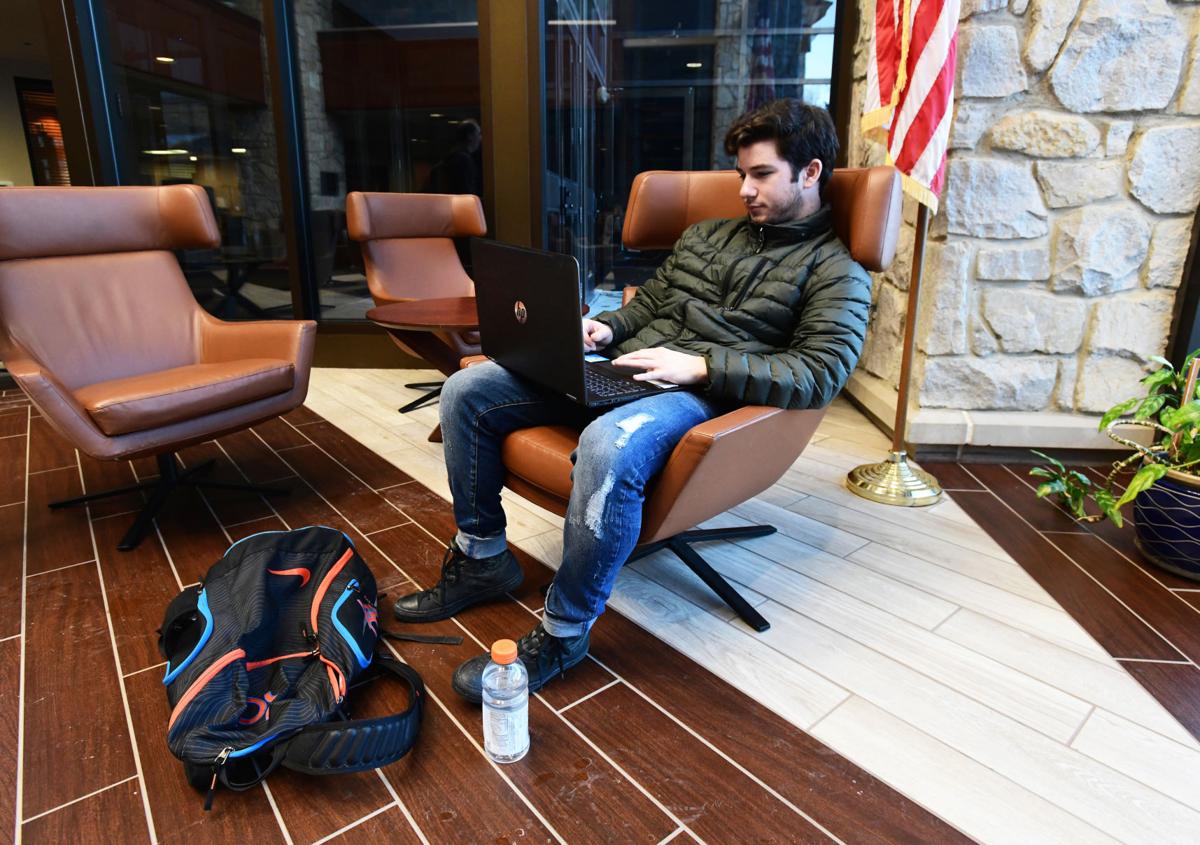 Marketing major Nick Milanesi of Patton studies on Jan. 7, 2020, in Biddle Hall on the University of Pittsburgh at Johnstown campus. Milanesi, a junior, transferred from Penn Highlands Community College.

Respiratory therapist majors Nicole Himes of Blairsville, left, and Lachel Clark of Everett, are interviewed while studying on Jan. 7, 2020, in Biddle Hall on the University of Pittsburgh at Johnstown campus. Himes is a junior and Clark a senior.

Marketing major Nick Milanesi of Patton studies on Jan. 7, 2020, in Biddle Hall on the University of Pittsburgh at Johnstown campus. Milanesi, a junior, transferred from Penn Highlands Community College.

After starting at Pennsylvania Highlands Community College he transferred to the University of Pittsburgh at Johnstown.

“Coming out of high school, I really wasn't sure what I wanted to do, so I went to Penn Highlands,” Milanesi, a marketing major, said. “It gave me an opportunity to try different things. After two years there, I actually took some time off. I went to work. I realized I'd like to go back to school.”

College officials say fewer high school graduates are applying to four-year schools. Tuition costs continue to rise. And more and more students are attending trade classes or two-year schools – such as Penn Highlands, which has seen an increase in enrollment over the last decade.

St. Francis University, Mount Aloysius College and Pitt-Johnstown, like many postsecondary educational institutions across Pennsylvania and the nation, have seen downturns in enrollment during the past few years.

“It's been a very big challenge,” Mount Aloysius College President John Mills said. “The high school numbers in the Northeast – and Pennsylvania is one of the leaders in this bad category of declining high school graduates – (means) there are fewer and fewer students out there for all the schools to recruit, especially schools like The Mount, which tend to recruit overwhelmingly from within the Pennsylvania communities. So it's a very, very challenging time for us and for every college.”

He said: “Our Franciscan mission has set us apart from other institutions, and adherence to that mission in times of changing demographics keeps us strong. Focusing on ethical leadership and service has brought us growth especially in the STEM and healthcare fields and we continually revamp offerings to meet workforce and societal needs.

"We have taken significant steps to innovate and restructure to meet challenges. We are encouraged that our 2019-20 class exceeded the previous year's numbers and we are seeing growth in our online adult learner population. Adding online graduate programs such as our master’s degrees in nursing and public health are also bringing new enrollments.”

The trends at the local colleges mirror decreases across the commonwealth.

There is expected to be a “demographic cliff” with a decrease of high school graduates starting around 2026, as a result of lower birth rates during the Great Recession in the late 2000s.

“We know how many kids are born in Pennsylvania right now for this year, and it isn't good,” Mills said. “It's down again. They're predicting a continuous decline in high school graduates. We're going to level off for a little bit for the next two to three years.”

Mills concluded: “No, it's not going to reverse. We're going to see this for clearly a decade or more to go.”

In order to address the declining enrollment, colleges have needed to adjust the way they try to attract students and what educational opportunities they offer.

For example, in the past decade or so, UPJ has added more than a dozen new majors, including transitioning its engineering technology degree to a full engineering degree from the University of Pittsburgh, adding a chemical engineering degree, and now offering management, marketing, accounting and information systems as full majors.

“Fortunately Pitt-Johnstown, we've been able to add programs to meet the needs of our constituents,” Therese Grimes, UPJ's associate vice president of enrollment, said. “We know what students are looking for.”

Grimes said, given the costs, fewer students have been entering with undeclared majors.

“Students are very savvy, and their parents are savvy when it comes to affording college,” Grimes said. “Affordability is a key factor in whether a student will attend a four-year school or not. I think that if a student is undeclared sometimes they are hesitant to even apply to a four-year college and then invest in two years of their education as an undeclared student. We have seen that trend for sure.”

Tuition costs in Pennsylvania are among the most expensive in the nation.

A 2019 Move.org study ranked the commonwealth as the fifth-most expensive with in-state tuition averaging $22,391, $24,570 for out-of-state and a net cost of $21,183, based on public and private colleges that offer bachelor’s degrees and higher.

Paying for education often requires students to get loans that they carry for years – sometimes even decades – to follow.

“Students may not realize the ramifications,” state Sen. Wayne Langerholc Jr., R-Richland Township, 35th District, chairman of the Senate's Education Committee, said. “We need to reach out to those students in high school and really tell them what the ramifications are of debt.

"When they think of student loans, they think, 'Oh, I'll take out this loan for four years. But once I get out I'll be making money and I can pay it off no problem.' But we really need to sit down with them with the nuts and bolts and say what it's really to be about. We need that kind of education at the state level to put that into the schools to make sure that people realize that.”

All student debt in the United States now stands at $1.5 trillion.

“When those young people graduate with a credential that gives them a very good professional job, they're saddled with large debt that defers their contribution to the economy by buying stuff, by buying houses, cars,” Mills said. “We think it's not just a mission-critical thing to reduce the burden of loans, but we feel it helps the whole Pennsylvania state economy by trying to cut down on that burden that students will face when they enter the professional workforce.”

Trish Corle, Penn Highlands Community College's vice president of student services, added: “We're very concerned about student loan debt. We're working very diligently to try to provide as much information as we can to the student in all the communities that we serve about how to manage that debt, how to make good decisions. It is an investment. And student loan debt is becoming a really serious problem across the country. Locally, I think it's a big issue, too. We want students to be mindful of the debt that they might be incurring as they make their decisions about postsecondary education and make sure that they make good decisions about those things.”

Colleges try to help students offset the cost with scholarships and other financial assistance, such as the Pitt Success Pell Match Program in which the Pitt system matches any Pell Grant funding a student receives on a dollar-per-dollar basis.

In comparison to college, which can take four or five years for students to complete, trade schools and community colleges offer opportunities to get an education and find employment in shorter times and at much less of an expense.

Penn Highlands, which offers both degrees and a path for students to earn credits before moving onto four-year school, projected an enrollment of 1,725 for the spring of 2020. That has increased from 1,586 in spring 2010 and 1,690 in spring 2015.

“We're offering students an opportunity to earn a degree here that will put them right into the workforce or do the first two years of a bachelor's degree here at a much deceased cost than what it would be at other institutions,” Corle said. “I think what we're seeing is students and their parents are becoming more and more consumer savvy when they're talking about higher education. They understand it's an investment. They really have to do their homework and understand the value of that investment and the value that a community college brings to postsecondary education.”

“If students and their supporters use those programs effectively and efficiently, it can dramatically reduce the cost of obtaining an associate's degree, a bachelor's degree, a master's, a doctorate,” Corle said. “That's really a good jumping-off point for students.”

Greater Johnstown Career & Technology Center also provides adult education opportunities in which students can get trained for a job in a year or less in fields ranging from cosmetology to welding.

GJCTC provides “more education by experience than education through theory,” according to Augustine. He described the school's adult enrollment as “stronger than it has been in I'd say the last 10 years.”

Two other UPJ students – Nicole Himes from Blairsville and Lachel Clark from Everett – did not believe their high school experiences properly prepared them for college.

“Negatory on that one, chief,” Clark said. “That one was not good.”

Himes said she lacked in some basic skills that were expected at college.

“I didn't know how to cite a paper,” Himes said. “I thought copying the URL was good enough. That's so sad because I had no idea. I came into college Comp 1 and they were like, 'Are you plagiarizing?' I was like, 'no, no, no.' Stuff like that. I had no idea.”

Both are now majoring in respiratory therapy.

“I'm not doing it for the money at all,” Himes said. “I really truly love doing respiratory. Clinicals are awesome.

"Not that I don't care about the financial part of it, but I'll pay it off. … My debt compared to my friends that I can talk to, my debt that I'm in right now is like the equivalent to one of their years. That's also why I'm not as worried about it.”

All three four-year colleges in Cambria County experienced noticeable drops in enrollment in recent years, according to numbers provided by the schools:

University of Pittsburgh at Johnstown (undergraduates):