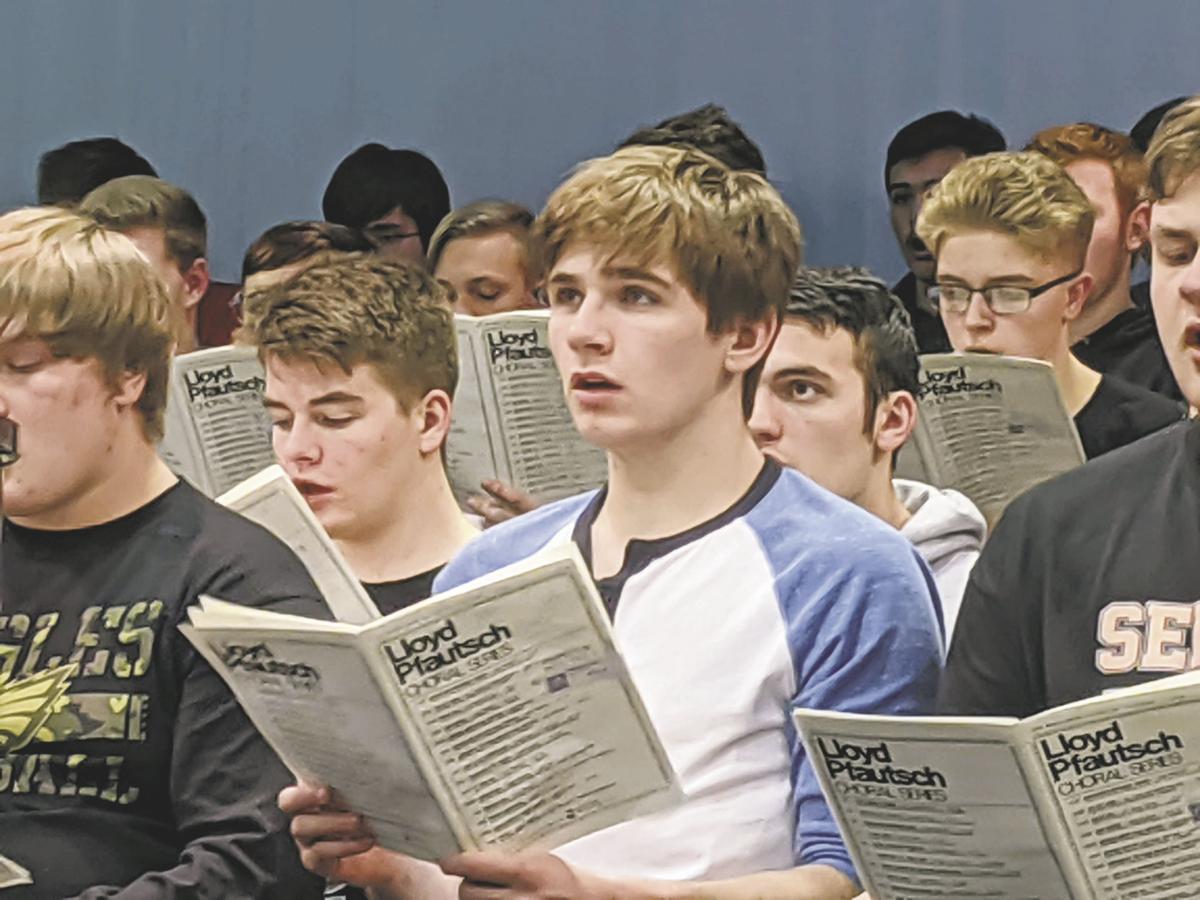 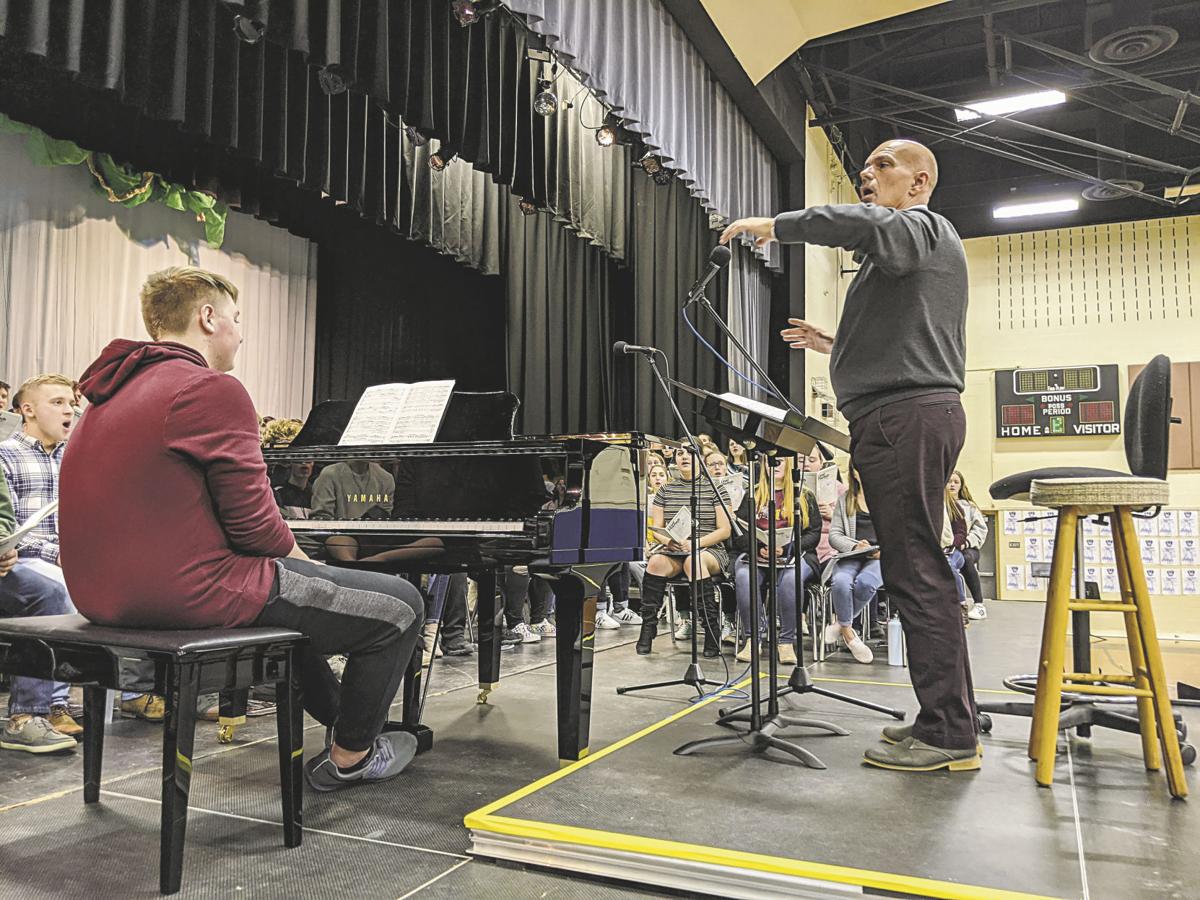 Conductor Ken Myers leads a choir of 200 high school singers from around northwestern Pennsylvania during a Thursday rehearsal in preparation for the PMEA District 2 Chorus Festival concert that is at 2 p.m. Saturday at Conneaut Area Senior High. 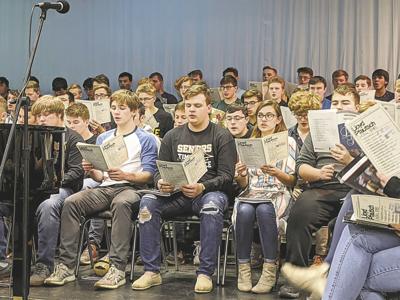 LINESVILLE — Inside Conneaut Area Senior High on Thursday, the squeak of sneakers was accompanied by the occasional referee’s whistle as the sounds of a basketball game drifted out of the gymnasium that visitors encounter at the school’s main entrance.

The PMEA District 2 Chorus Festival culminates with a concert at 2 p.m. Saturday at Conneaut Area Senior High School, 302 W. School Dr., Linesville. Tickets are $4 for adults and $3 for students.

“Some to the lute,” the chorus sang, “some to the viol went.”

Moments later, the same line, sounding much the same, rang in the air once more: “Some to the lute, some to the viol went.”

While the untrained ear noticed little difference between the two versions — or the third version that followed — conductor Ken Myers, hands raised before him, heard enough of what he was listening for to let the singers continue. A few measures later, he signalled another pause and it was time for a bit more constructive feedback before the singers raised their voices once more.

The singers, drawn from high schools in a seven-county portion of northwestern Pennsylvania, are participating in the three-day Pennsylvania Music Educators Association District 2 Chorus Festival hosted by CASH, which culminates with a concert at 2 p.m. Saturday.

The festival is one of 12 taking place across the commonwealth this weekend and the concert, according to CASH choral director Ralph Egyud, is not to be missed.

“This is going to be an amazing concert,” Egyud said as crowds of singers made their way back to the gymnatorium after breaking for dinner. Nearly four months after beginning their preparations for the event, the singers had two more hours of rehearsal ahead of them Thursday and a full day today, not to mention auditions for the many singers who hope to qualify for Regional Chorus.

“To get to come to this and sit in the choir with 200 of the best singers in our whole rural region is a really big deal,” Egyud said.

The rural nature of the district means many participating students rarely have an opportunity to sing with such a large group, he said.

For Kinsey Lowers, a senior at Jamestown Junior-Senior High, the difference between her school’s choir and the District 2 chorus was significant.

“My choir at school has five people,” Lowers said before taking the stage with a choir 40 times as large as what she’s used to.

“It gives a chance for smaller schools to perform with a big ensemble, which we don’t get very often,” Troyer said.

The Maplewood chorus has about 40 members, Troyer said, but with only four boys, it seems much smaller. Because of the imbalance, Troyer usually winds up singing tenor parts that would usually go to boys rather than the low alto parts that are more natural for her.

The supportive and focused atmosphere of the event also makes it special.

While the festival functions as a competition, with singers auditioning throughout to advance to the next step toward qualifying for State Chorus, Cambridge Springs Junior-Senior High junior Lupita Martinez said the environment is consistently positive.

“This,” Martinez said, “is my place to escape.”