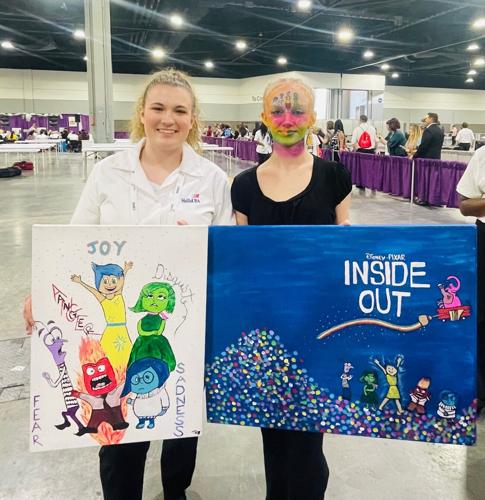 Trista Robinson and her model, Chloe Crawford, display posters used in Robinson’s presentation of the ‘Inside Out’-themed fantasy makeup design that Robinson created and applied to Crawford’s face at the SkillsUSA National Leadership and Skills Conference held last week in Atlanta, Georgia. Both women are recent graduates of Maplewood Junior-Senior High and also completed programs at Crawford Tech. 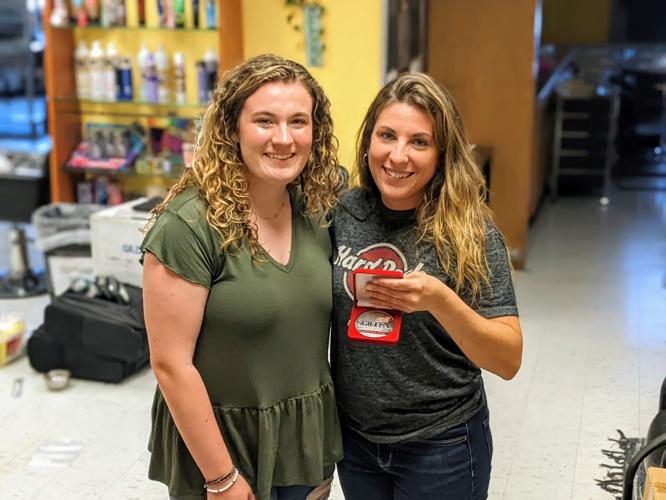 Trista Robinson and her model, Chloe Crawford, display posters used in Robinson’s presentation of the ‘Inside Out’-themed fantasy makeup design that Robinson created and applied to Crawford’s face at the SkillsUSA National Leadership and Skills Conference held last week in Atlanta, Georgia. Both women are recent graduates of Maplewood Junior-Senior High and also completed programs at Crawford Tech.

For the second consecutive year, Crawford Tech’s cosmetology program has produced one of the best students in the nation.

“This has been my whole senior year,” Robinson said of the preparations that went into the competition. “It’s been a blur.”

Robinson wasn’t the only Crawford Tech representative at the competition this year. She was accompanied by cosmetology instructor Kristen Deets and by fellow Maplewood senior and health occupations student Chloe Crawford, who served as the living canvas for Robinson’s masterpiece of makeup art.

Due to a variety of circumstances, Crawford was the third model Robinson had used in three successive rounds of competition from district level to state level and then nationals. Despite the rotating cast of models and other challenges, such as the oral presentation that was part of the competition, Deets said her student never wilted under the Atlanta heat or the competition’s pressure.

“She did really well,” Deets said. “She is very creative and that, I think, really helped her with the fantasy makeup (part of the competition), but in general it takes a very well-rounded student.”

It also took many late nights. Both women recalled evenings spent in the Crawford Tech cosmetology classroom preparing for the competition. and both cringed a bit as they recalled Robinson’s first run-through on the oral presentation that participants give to explain the thinking behind their fantasy makeup designs.

Robinson’s design was inspired by “Inside Out,” the 2015 animated film that is one of her favorites.

“There’s a lot of emotion to that movie,” Deets said. “The characters represent emotions, and she tied that into the emotions of going through high school during this pandemic. It had a lot of thought and meaning to her heart.”

But while that was the idea, Robinson at first had a hard time explaining it.

“One day I made her come to my office and we sat down and I made her go through the oral presentation,” Deets recalled with the kind of smile that comes easily after your student finishes second in the nation. “And she kind of acted like she’d never talked to anybody before — ever.”

Robinson, laughing at the memory, described it as a wake-up moment that was followed by nonstop practice.

“My poor siblings,” she said, “they know just about everything about it.”

Robinson herself knew her monologue as well by the time she arrived at the Georgia World Congress Center that hosted the competition. and knowing it well, she thought, was one of the things that helped separate her from nearly everyone over the course of the three-day competition. After an orientation and written exam the first day, the oral presentation and facial on day two, and a third day devoted to makeup — first a “beauty” application and then the fantasy application — only Tess Brunelle of Taunton, Massachusetts, had outscored Robinson on the judges’ cards.

When Deets looked ahead to the competition in April, it seemed a bit intimidating. Sure, Locke had won last year, but that competition was held virtually in the comfort of familiar surroundings. This year, for the first time, it was taking place in Atlanta — in what they described Thursday as “a humongous arena.”

“We’re nervous for the big city portion of it because we’re small-town country girls,” she said back in April. “I don’t know.”

Now she knows. and before Robinson, Crawford and Deets had left the southern heat behind, they already were fielding calls from friends and acquaintances looking to book a facial from Crawford Tech’s newest medal winner.

They’ll be able to do that soon: Robinson is accepting appointments at Chelby’s Hair Garage, the Townville salon owned by her mother, Chelby Robinson.

“She’s more hair-focused,” Trista said, “so I’ll definitely be bringing in the other side of stuff.”

With tolls continuing to rise on the Pennsylvania Turnpike, will you seek alternate routes to avoid higher prices?