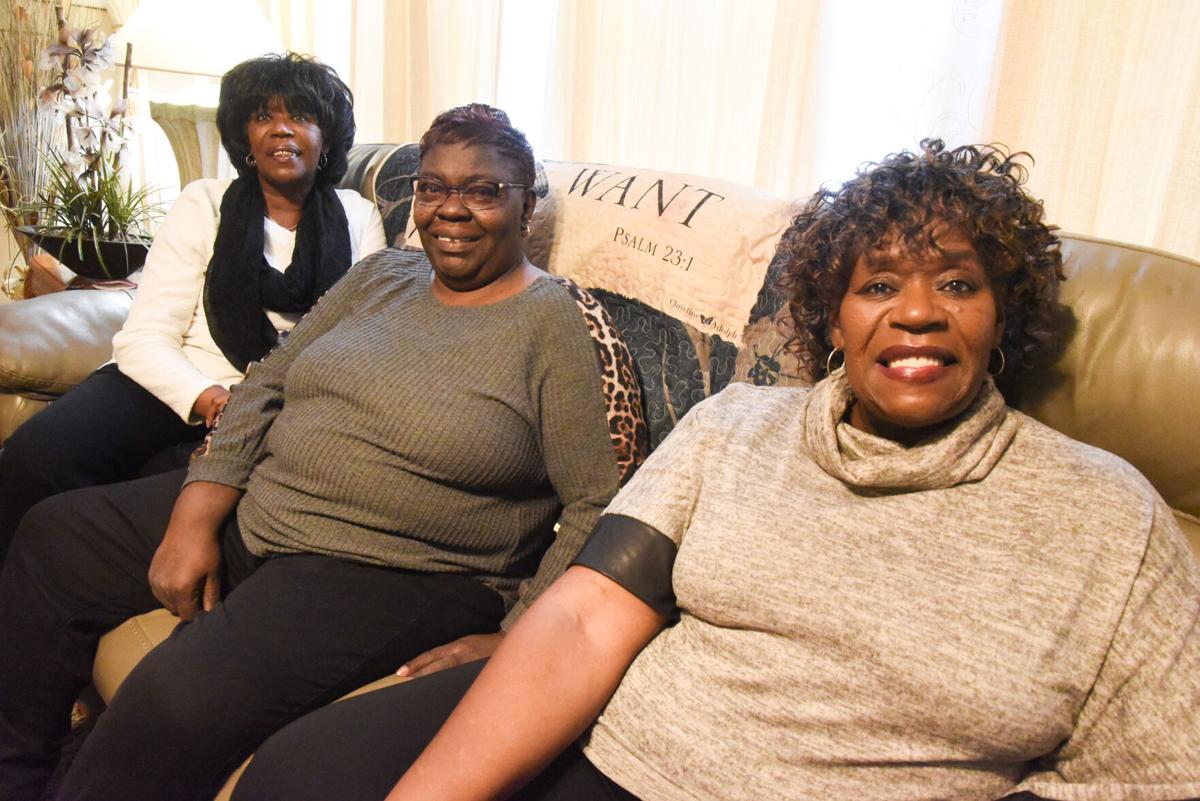 Triplets (from left) Millicent Burnett, Melinda Burnett Brown and Melissa Burnett pose in the living room of Melissa’s Meadville home over the weekend prior to celebrating their 65th birthday on Sunday. 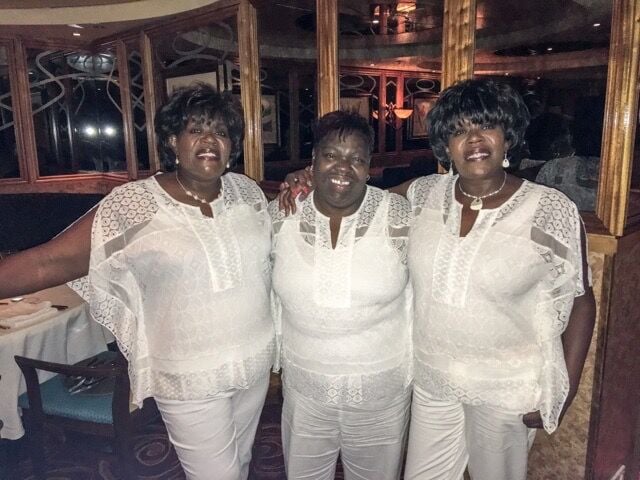 Triplets Melissa Burnett, Melinda Burnett Brown and Millicent Burnett pose during a cruise taken to celebrate their 60th birthday in 2017. The matching outfits were a throwback to when their mother frequently dressed them alike as children, though the sisters noted that on this occasion the outfits were voluntary.

Triplets (from left) Millicent Burnett, Melinda Burnett Brown and Melissa Burnett pose in the living room of Melissa’s Meadville home over the weekend prior to celebrating their 65th birthday on Sunday.

Triplets Melissa Burnett, Melinda Burnett Brown and Millicent Burnett pose during a cruise taken to celebrate their 60th birthday in 2017. The matching outfits were a throwback to when their mother frequently dressed them alike as children, though the sisters noted that on this occasion the outfits were voluntary.

It wasn’t a race exactly, but three northwestern Pennsylvania girls were in a hurry on Jan. 9, 1957.

After sharing the same tiny space for nine months, it’s easy to understand why they might have been ready to put some distance between one another.

But 65 years later, the Burnett triplets remain as close today as they were when they were born.

“This is the story my mother told us,” said Melissa Burnett, seated on a couch in the living room of her Meadville home. Beside her on the couch was her sister Millicent Burnett; her sister Melinda Burnett Brown was in an armchair on her other side. “We live by these stories she told us.”

The story, Melissa explained with frequent interjections from Millicent and Melinda, was that the three sisters were delivered in the span of about five minutes.

“We were kicking each other out,” Melinda added.

“We were popcorn,” Melissa said with a laugh, clapping her hands three times in quick succession. “Pop — pop — pop.”

Their mother, Ida Ruth Burnett, was from a family of 13 children in central rural Georgia and presumably knew what she was doing: The triplets were the 12th, 13th and 14th children for her and her husband, K.C. Not only did they represent a considerable expansion to the family, they “even(ed) the score,” as their mother told a reporter after their birth, giving the Burnett household seven boys and seven girls.

They were the first multiple births for the family and also gave the family its first set of identical twins: Melissa and Millicent developed from a single fertilized egg. Melinda, the product of a separate egg, is a fraternal twin to her fellow triplets and managed to squeeze in between the other two during birth, making Millicent the baby — a fact that Melinda still reminds Millicent of 65 years later.

But despite beginning life with a seeming eagerness to find some personal space of their own, the triplets describe themselves as lifelong best friends. They were hard-pressed to remember a time they didn’t celebrate their birthday together. Far from resenting the shared day, they looked forward to it.

“It was the best,” Millicent said. “We always were girlfriends — real good girlfriends, never really fought.”

“I wouldn’t have it any other way,” Melinda agreed.

By the time the triplets started kindergarten, their family had moved from Albion, where they lived when they were born, to Meadville, where they became a familiar sight. Triplets, a rarity even now, occurred about once every 10,000 births during an era that pre-dated fertility treatments, according to the American Society for Reproductive Medicine. Newspapers reported their birth at Saint Vincent Hospital in Erie, noting both their mother’s age — 38 — and their father’s salary — $65 per week — and reporters checked in periodically over the ensuing years as the sisters became something of a status symbol for their mother.

“We were really considered miracles in those days,” Melissa recalled. “She always wanted us to look good. She was so proud of her three triplets.”

Not only did their mother want the girls to look good, she wanted them to look the same. As children, she dressed them exactly the same, in fact. For years, this worked out well for the triplets: In order to find duplicate outfits, their mother ended up shopping at the nicest stores in town.

But as they reached their teens, dressing alike became less enjoyable for the sisters. It was also impractical: The three looked so much alike that even their mother couldn’t tell them apart. If one got in trouble, all three were punished. If you let us dress differently, you’ll be able to tell us apart, the sisters recalled telling their mother — no avail.

Around the time they reached fifth or sixth grade, Melissa recalled, “We hated it.” By then, there were even times when the girls would bring extra clothes so they could change into different outfits at school — but they had to change back before returning home in the afternoon.

“It was a Valentine’s Day photo,” Millicent said, “and we all had on the same dress. That was the last time we had to dress alike. Then she started letting us be ourselves.”

The triplets were still the youngest siblings in a large family, however, with seven older brothers.

“We were so spoiled,” Melissa said.

“Actually, they still do,” Melinda added with a laugh.

The sisters remained close as they graduated from Meadville Area Senior High in 1975 and Melinda and Millicent soon moved to Pittsburgh to go to business school.

Over the ensuing decades the sisters took their own paths and had families of their own. Melissa, the oldest, remained in Meadville, and raised a son and daughter. After working nine years for Crawford County Children and Youth Services, an after-school vocational program she coordinated for disadvantaged youth led to a move to Edinboro University of Pennsylvania, where she spent nearly three decades in a variety of roles, including manager of the school’s Meadville branch for six years.

“I still have a lot of student connections,” Melissa said. “It kept me young, kept me in the know.”

After retiring several years ago, Melissa occupied her time serving on Crawford Central School Board and working with several other nonprofits. More recently, she has take a part-time position as a chaplain at the State Correctional Institution at Cambridge Springs, where she had previously volunteered in a similar capacity for more than 20 years.

Melinda, the second of the triplets, retired in 2015 after 34 years as an account clerk with Pittsburgh Water & Sewer Authority. She raised a daughter and “picked up nine more” stepchildren when she married Ross Brown, who died last year after 20 years of marriage.

Millicent, the baby, isn’t ready to retire yet and continues as a customer service supervisor for an airline — a job she loves and that has allowed her to travel all over the globe but that has been “a different world” over the past couple of pandemic-affected years. She raised a daughter; today, her daughter and her two grandsons are her “heartbeat,” she said.

Reflecting on the Meadville childhoods that shaped them, surrounded by relatives, often dressed alike, poor but celebrities of a sort, Melissa said one constant element was key.

“We were prime examples of what family was,” she said. “That ‘it takes a village’ thing — our family took care of each other.”