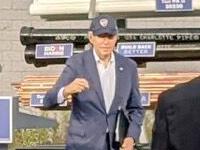 SUMMIT TOWNSHIP, Erie County — Former Vice President Joe Biden made an appearance today just south of Erie, the latest stop on his campaign for the presidency.

How many more presidential debates should take place before the election?

After touring the United Association Local 27 Erie Training Center, Biden emphasized the “Build back better” theme at the center of his campaign’s jobs and economic recovery plan.

Against a backdrop of plumbing workshops where apprentices learn the skills they need, Biden made an appeal designed to win the votes of blue-collar workers.

“Everybody thinks I’m joking — if every investment banker in New York went on strike, nothing would much change in America,” Biden said from behind a bench where new members of the trade learn the intricacies of medical gas plumbing.  “If every plumber decided to stop working, every electrician, the country would come to a halt — I mean literally, not figuratively, literally.”

Biden’s stump speech just 24 days before the election was an apparent effort to avoid the mistakes of former Secretary of State Hillary Clinton in the 2016 campaign. While Trump visited Erie in August 2016, Clinton held no campaign events in the traditionally Democratic stronghold and went on to lose to Trump by about 2,000 votes in Erie County. Trump took Pennsylvania by just over 44,000 votes in 2016.

But while Biden’s appearance in Erie drew a sharp contrast to Clinton’s approach, it was no Trump-style campaign event. The closely packed crowds, largely unmasked, that filled Trump’s events in the weeks prior to his diagnosis with COVID-19 were nowhere to be seen.

Biden’s crowd, seated under a tent in the parking lot behind the facility, measured in the dozens rather than the thousands. Spectators all underwent a temperature check and medical questionnaire before being allowed in and were issued surgical-style masks if they did not already have one. About 35 folding chairs were spread widely under the tent, each in the center of a 5-foot wide plastic circle like a flattened hula hoop.

Addressing the elected officials, union members and Democratic Party leaders who were present, Biden made it clear that the contrasts between his appearance and Trump’s rallies were intentional.

Building up to a line he has used before, Biden emphasized that more than 210,000 Americans have died in the coronavirus pandemic and that between 700 and 1,000 people are dying with COVID-19 each day.

“The president was told a little while ago — when he was told 100,000 people a day were dying, you know what he said?” Biden said, misstating the number of daily deaths. “He said, ‘It is what it is.’

But Biden’s main focus in the 20-minute address that began shortly after 5 p.m. was jobs and his plan to increase the number and quality of jobs for working class Americans in particular.

Wayne John Koch, born August 30, 1947, and passed away October 17, 2020, at 4:05 p.m. He was raised in the Montoursville area. Wayne moved to Conneaut Lake, PA, after graduating from Bloomsburg University. He taught at the Conneaut Lake School District for 35 years, teaching business and acc…