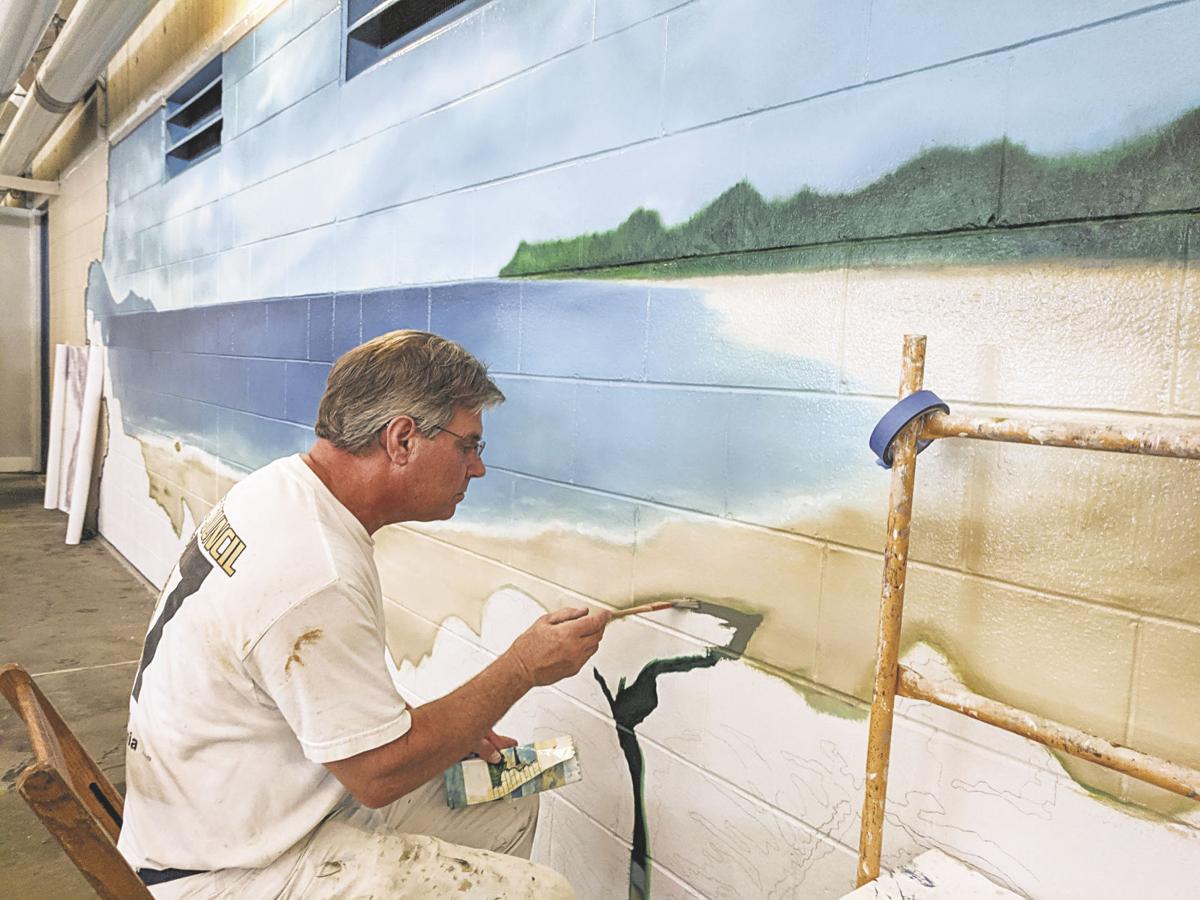 Giles M. Grinko works on a new beach scene mural inside the George J. Barco Aquatic Center at the Meadville Area Recreation Complex on Thursday. Grinko and other members of the western Pennsylvania chapter of the International Union of Painters and Allied Trades donated materials and time to the nearly completed mural project. 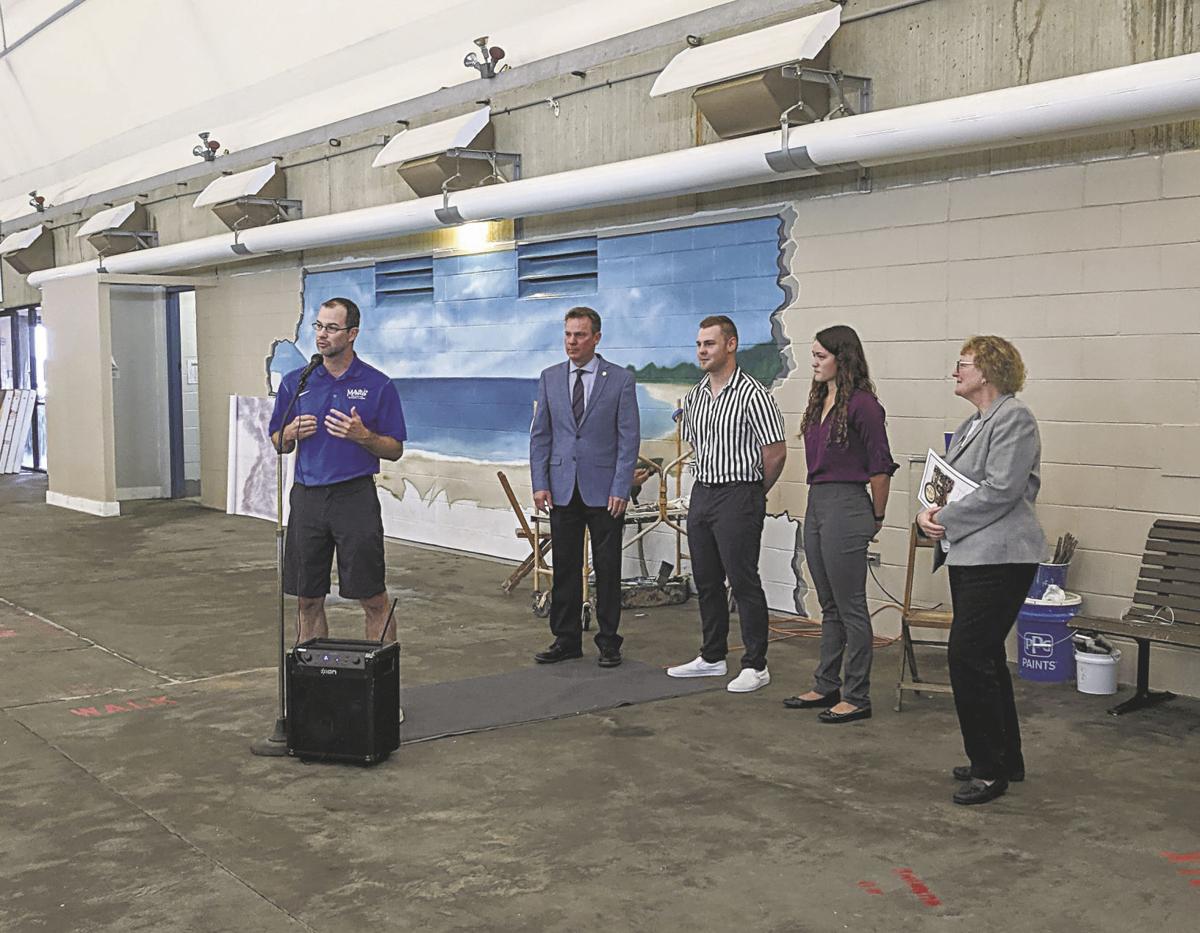 Aaron Rekich, executive director of the Meadville Area Recreation Complex, speaks during a press conference Thursday in front of a nearly completed beach-scene mural. Rekich was joined by state Sen. Dan Laughlin, Kyler Kantz and Lindsey Sekerski, the MARC lifeguards who conceived of the mural and other improvements, and Diane Helbig, district director for Sen. Michele Brooks.

Thanks in large part to two Meadville Area Recreation Complex lifeguards, future visitors to the George J. Barco Aquatic Center will enjoy a beach-front view as they splash in the facility’s indoor pool.

After patrolling poolside at the MARC for nearly four years, Lindsey Sekerski and Kyler Kantz felt the interior of the pool building could use a facelift. The two lifeguards came up with a concept, pitched it to the board that oversees the complex, applied for grants and won the support of union painters in the region to help make the first phase of their vision a reality.

At a press conference held on the pool deck Thursday to celebrate the near-completion of the beach scene mural that is the highlight of the project, Aaron Rekich, executive director of the MARC, lauded the efforts his two 19-year-old lifeguards had undertaken to brighten up the pool area.

“Their passion and their love for this pool really, really shows in the project that you’re going to see behind me,” Rekich said as he stood before the enormous stretch of sand, deep blue water and sky. “They have really made this place a destination for the community of Meadville.”

The project included not only the 8-by-25-feet mural that appears to emerge from a hole in the facility’s cinder block wall, but a sand-colored paint job for all of the interior walls to cover the original white that was showing its age. The improvements wouldn’t have been possible, according to Sekerski and Kantz, without the donation of advice, materials and labor from members of the western Pennsylvania chapter of the International Union of Painters and Allied Trades and the Northwestern Pennsylvania Area Labor Federation.

When Sekerski met with IUPAT officials Giles Grinko and Brian Herbinko, she told them of her efforts to find grants to support the project.

“Giles and Brian looked at me and said, ‘You get what you can, but don’t worry about it,’” Sekerski, 19, told the crowd assembled alongside the shallow end.

Crews led by Herbinko have transformed three of the interior walls over the past seven months, squeezing in work between other jobs and traveling from the Pittsburgh area when they could. Grinko, in the meantime, tackled the mural, working with Sekerski and Kantz to adapt their concept to the dimensions of the space on the wall near the pool locker rooms.

“Painting is 90 percent preparation,” Grinko said during a break from work on a beachside palm tree. Part of Grinko’s preparation included the design of a second beach-themed mural that will eventually be added near the doors to the outdoor pool. Rekich said he hopes to entice volunteers from the Meadville art community to paint the scene next year.

The months-long project has not only transformed the interior of the aquatic center, it has had a lasting effect on Sekerski and Kantz.

“Growing up through the MARC has really made a huge impact on my life,” said Sekerski, who is now a sophomore at Allegheny College when she’s not watching over the pool. “Doing this for the MARC was a way to give back and to show how much I have grown from the beginning of working here.”

Kantz, an Army reservist who begins college at Robert Morris University in January, said he couldn’t have pictured himself helping with such a project when he was taking lifeguarding classes four years ago in preparation for his first job.

“Wherever you look there’s opportunity, especially in our community,” he said. “Just to be able to continue giving to this place that has given me so much is something really rewarding.”

The soon-to-be-completed fresh paint job and murals are just the first phase of Sekerski and Kantz’s vision for transforming the aquatic center. Phase two involves more elaborate — and more expensive — changes to the removable doors that can be opened during the summer to allow access to the outdoor pool and the side yard.

The two lifeguards hope to replace the panels now in use with glass — fixed windows for the side yard and sliding panels to allow access to the outdoor pool. Doing so would allow more light inside the facility when the doors are closed and make the building more energy efficient by allowing a release for the heat and humidity that tend to be trapped inside.

Phase two will have to wait until funding is available, according to Rekich, and until more progress is made on the several other projects underway at the MARC, including work on the pool locker rooms, a sound barrier for the ice chillers, an ice arena party room and major upgrades to the Eldred Glen baseball facility.

For state Sen. Dan Laughlin of Erie, who said he was filling in at the event for Sen. Michele Brooks, who was unable to attend, the project has already achieved perhaps the most important goal.

“I think this is wonderful,” he said with a glance toward where Sekerski and Kantz were standing near the mural. “When you get these youth involved in civic projects like this, they become lifelong better people in my opinion.”