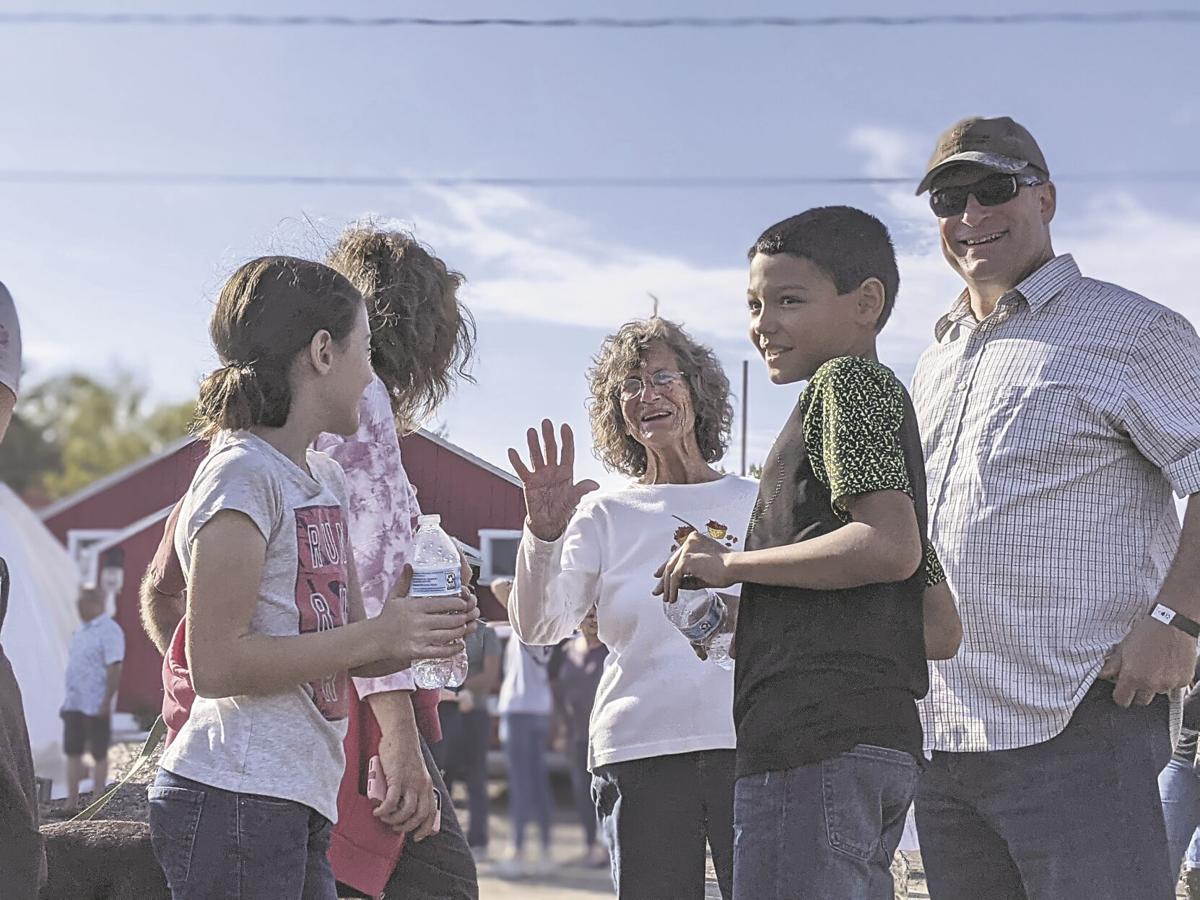 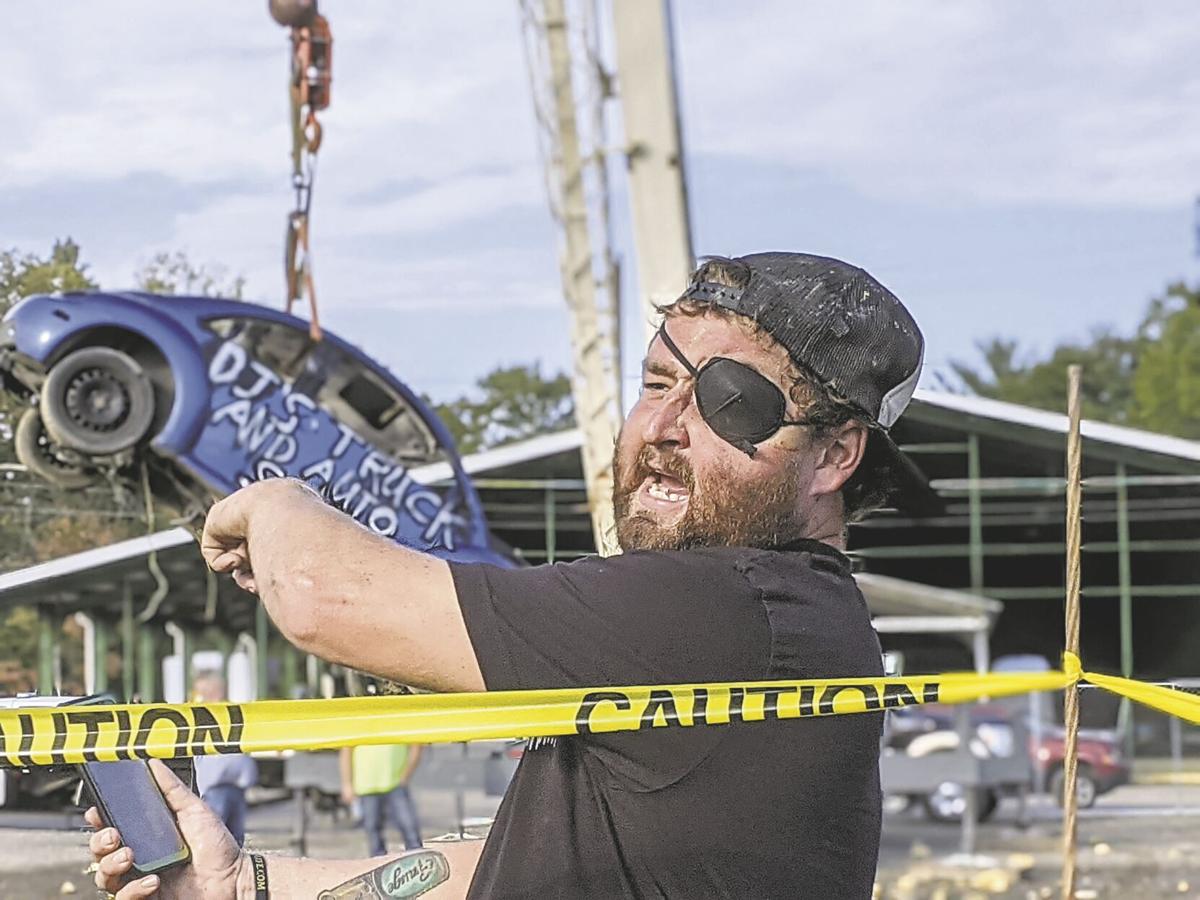 Dakota Papsun of DJs Truck and Auto Salvage, which supplies the vehicles used in the annual pumpkin drop at Fall Pumpkin Fest, addresses the crowd Sunday as a crane lifts a Volkswagen Beetle to be dropped. A pumpkin dropped onto the Beetle moments earlier had done disappointingly minor damage, so Papsun proposed dropping the car.

Dakota Papsun of DJs Truck and Auto Salvage, which supplies the vehicles used in the annual pumpkin drop at Fall Pumpkin Fest, addresses the crowd Sunday as a crane lifts a Volkswagen Beetle to be dropped. A pumpkin dropped onto the Beetle moments earlier had done disappointingly minor damage, so Papsun proposed dropping the car.

When a Sunday afternoon attempt to squash a Beetle by dropping a pumpkin the size of a boulder on it fell flat — and not in a good way — Dakota Papsun had a moment of clarity.

When Fall Pumpkin Fest gives you a pumpkin drop experience that leaves a sour taste in the mouths of hundreds of spectators, make pumpkin pie?

The lemons-lemonade analogy, like the nearly half-ton pumpkin that moments earlier had plummeted toward a junked Volkswagen, took a bit of a wrong turn. Nonetheless Papsun, who owns DJs Truck & Auto Salvage, knew what he had to do to make it up to the crowd at Conneaut Lake Park.

“The pumpkin malfunctioned — it rolled out of the net wrong,” Papsun explained. “I said, well, we’ve got to destroy this car.”

The pumpkin malfunction occurred when the behemoth meant to crush the roof of the blue Beetle instead dealt only a glancing blow above the vehicle’s steering wheel. Twenty-four hours earlier, things had gone smashingly when a similar gourd flattened a Toyota Prius.

But on Sunday, no such luck: The Great Pumpkin left a dent, but not nearly the level of devastation that deflated crowd members had been hungry for.

“It wasn’t as loud as I thought it was going to be,” said 10-year-old Kippa Martz of Cooperstown. Martz had envisioned something quite different as she looked up at the pumpkin suspended above the blue car.

But having witnessed the reality of what was more pumpkin fail than pumpkin fall, Martz’s description fell from its pre-drop heights.

“It kind of hit the side of the car,” she said.

Papsun, inside the drop zone, seemed to have much the same reaction, but he rallied quickly. Within moments, he bellowed a message to the crowd.

Hearing this, friends and family members looked at each other. Could this be for real? They’re going to drop the Volkswagen Beetle that just took a giant pumpkin to the roof? Won’t that send metal flying like the pumpkin pieces that had just flown skyward upon impact?

Some people, apparently thinking there would be no more spectacle to see, wandered back toward the approximately 150 vendors set up on Conneaut Lake Park grounds for the event — dozens more than in 2019 when the event was last held, according to lead organizer Becky Leonard of Conneaut Lake Area Business Association.

Regardless of the outcome of Sunday’s pumpkin drop — or the dropping of the Beetle, if that were to pass as well — Leonard had already declared the event a success. Given a COVID-19 pandemic-related cancellation last year, the sale of the park earlier this year, and ongoing concerns about whether the park has a future, some had predicted that this would be the last Fall Pumpkin Fest. The 30-year-old event, this line of argument went, would go out with a whimper rather than a bang.

“For all the naysayers who said this was going to be a flop," Leonard said, “it’s been amazing.”

Even rain on Saturday couldn’t prevent thousands from attending, according to Leonard. And, she added, she had “no regrets” about continuing the three-day festival at the park. Todd Joseph, whose Keldon Holdings LLC in March purchased the park for $1.2 million in cash from Trustees of Conneaut Lake Park, has been the target of criticism from many who disapprove of changes at the park, but Leonard said, “I have had total cooperation. It has been awesome.”

The Davis family of Buffalo, New York, agreed with Leonard’s assessment. As 6-year-old Josie, her face painted as a tiger, enjoyed the pony ride attraction, parents Eric and Kristen explained that they had been in Erie when they saw an online article about things to do for the day. Reading about Fall Pumpkin Fest, they decided to drive to Conneaut Lake for the day.

Such reactions seemed to support Leonard’s confidence about the event’s future — at least for the near term. The festival will be back in the park next year, Leonard said, explaining that 2021 was the first year in a two-year agreement.

But while Leonard was certain what would be happening next year, the audience milling about just outside her trailer headquarters still seemed unclear on what, if anything, would happen in the aftermath of the depressing pumpkin drop. Are they really going to drop a car from about 40 feet in the air?

At least one adult voice could be heard tamping down the expectations of youngsters, saying the likelihood of a car speeding earthward was very low.

And at least one reporter thought to himself, is this really a good idea?

From Papsun's perspective, it was a really good idea, and after checking with event authorities, it was really going to happen.

Quickly, the fun took a serious turn as audience members seemed to realize this was going to happen. The pumpkin-damaged vehicle was hooked to the crane provided by Precision Crane of Linesville and began rising skyward. Crew members inside the drop zone told crowd members to move back 10 feet. Moments later, the same message went out again: everybody move back another 10 feet, just to be safe.

In a moment of vehicle-destruction deja vu, the crowd found itself once again counting down and suddenly, before anyone had a chance to reconsider, the deep blue-colored Beetle seemed to realize nothing was holding it up anymore. There was no malfunction this time.

The vehicle, which Papsun estimated about a ton after the engine, glass, fluids and other potentially dangerous parts had been remove, plummeted straight down, its damaged hood flapping upward mid-flight like a defective wing, before it crashed with a satisfying crunch and a bit of a bounce off of its front wheels.

Papsun, still feeling the exhilaration of the impact, was more than satisfied to end on an emphatic bang.

“It really turned out pretty well. The crowd loved it — something different,” he said. “It really opened the borders for future ideas.”

Editor’s note: This story has been updated to reflect that Precision Crane of Linesville provided the crane used at Fall Pumpkin Fest. The company was misidentified in an earlier version of this story.